Karma and the Art of Butter Chicken

The past and present mingle in this charming story about the healing power of food. 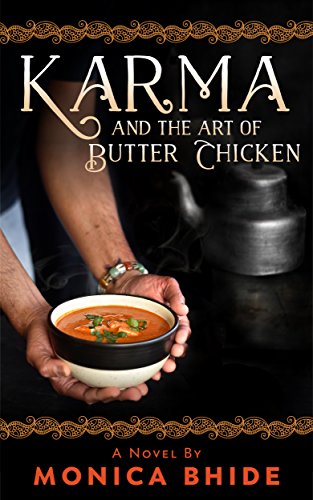 There's a moment in Monica Bhide's Karma and the Art of Butter Chicken that encapsulates its openhearted, cinematic feel. Faced with too little food to feed the hungry, a chef named Eshaan Veer Singh "started with the coriander, cumin, and fennel seed mixture that was his favorite. He placed all the seeds on a warm skillet, and instantly a toasty aroma filled the room. He closed his eyes and inhaled. Could the smell of roasting spices heal a worried heart?"

Here, and throughout the novel, Eshaan is called to blended themes of love and nourishment. Bhide's characters carry readers through marriage plots, intriguing settings, and seemingly insurmountable obstacles that, considered in the right light, just might reveal a way through.

Eshaan, a chef with a troubled past, has been raised in a Delhi Buddhist monastery. He dreams of running a sort of hybrid restaurant/soup kitchen where he will feed poor people with meals he'll prepare from donated food. He also dreams of a reunion with Kitt, the woman he loves. Impediments to both of these goals abound — thugs and logistics threaten his kitchen, as does Kitt's engagement to another man.

Bhide sketches filmic, detail-drenched scenes throughout the novel as Eshaan strives to solve his problems and achieve his ambitions. The central building of the monastery is topped with a golden wheel of dharma and two deer statues; the Nizammuddin area, home to shrines and tombs, pulses with vendors and pilgrims, and the pious clean the shoes of other worshippers to remind them to stay humble.

Tradition holds in Eshaan's world, though it grows increasingly complicated and nuanced. Some is superstitious: One character believes menstruating women walking near pickles will ruin the batch; another, that black cats bode ill. At an interactive dinner theater, Eshaan and friends watch a performance of the Mughal Empire-era story of Razia, the first woman to rule Delhi. The past connects with the present and future and is just as relevant.

Desperate to repair his life, Eshaan earns a chance to appear on an Indian cooking program, where the host, all part of the over-the-top act, berates him. With her description of the show, Bhide collides the present day with tradition: "There were tears, screams, name calling, and muffled laughter as one contestant stood at her station, lit an incense stick, and prayed over her dish."

Supporting characters enliven the novel. Loveleen, Eshaan's cricket-besotted best friend, is a likable hothead who gets in weekly screaming fights with a neighbor. The monk, Lama Dorje, inspires and cares for Eshaan. And Kitt's father, who has experienced his own heartache, works to understand and help his daughter.

All play roles in helping Eshaan feed the people he cares about, just as he himself was fed. "Each grain needs to be worshipped. Each flower needs to be respected. Each blade of grass is the promise of life," Eshaan's father tells him.

Characters often refer to Bollywood, part of an appealing, self-conscious note that recurs throughout the novel. Describing India, characters all but stop to address the reader: "My dear, this happens only in India," one says on a visit to a Sufi shrine. "All paradoxes are reality."

Bhide punctuates the novel with poems from Eshaan's journal, letting readers glimpse an interior life that Eshaan hides. These also lend the book a little darkness and depth. "I lift up this broth to serve it to you," goes one poem. "And then I realize what I am about to do/I cannot feed you my fears."

Like the sugared, milky cardamom coffee Loveleen prepares for Kitt, Karma and the Art of Butter Chicken was made with obvious affection, skill, and understanding.

Eliza McGraw is author of Here Comes Exterminator! which is about the 1918 Kentucky Derby winner. It came out in April 2016 from St. Martin's Press.

At 76, the author is still tilting at the windmills of institutional power.