The Pulitzer-winning reporter recounts the pitfalls of proffering an opinion. 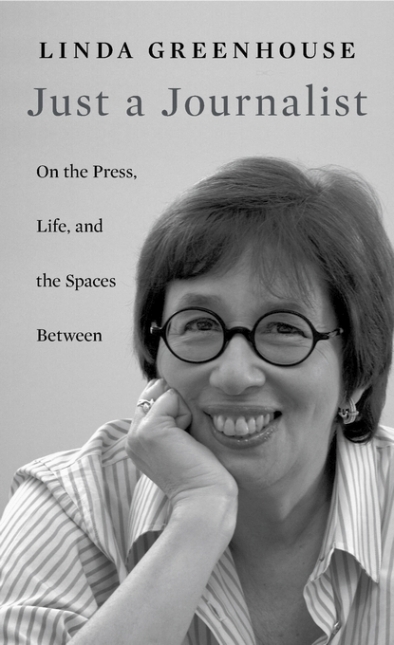 If Linda Greenhouse is “just a journalist,” then Secretariat is just a horse. With a Phi Beta Kappa key from Radcliffe (1968) and a Pulitzer Prize (1998) “for her consistently illuminating coverage of the United States Supreme Court” for the New York Times, Greenhouse is the gold standard of journalism.

(Full disclosure: Greenhouse is a friend, and I admire her — personally and professionally. She’s the woman so many would like to be: smart, accomplished, and principled.)

Her book, not so much memoir as treatise, took root from a set of lectures she delivered in 2015 at her alma mater about the role of a journalist as a public person and a private citizen. She used herself as an example to pose provocative questions about the shifting boundaries in journalism and whether the old shibboleths remain effective in the 21st century, especially prescient now that we’re in the era of Donald J. Trump and his “fake news” and “alternative facts.”

Sparking her reflections on the subject was her personal experience following a speech she gave after receiving her college’s highest honor, the Radcliffe Medal. It was 2006, during the second term of George W. Bush, when, she told her audience, “Our government had turned its energy and attention away from upholding the rule of law and creating law-free zones at Guantanamo Bay, Abu Ghraib…and let’s not forget the sustained assault on women’s reproductive freedom and the hijacking of public policy by religious fundamentalism.”

She also talked about how the world had in some important ways gotten better, especially in the workplace for women and through the Supreme Court’s recognition of gay men and lesbians’ rights to “dignity” and “respect.”

Greenhouse took heat for expressing herself on these matters of verifiable fact, all part of the public record and covered in depth by the media. She did not reveal state secrets or endanger national security. She simply offered her opinion on the world at that time. Still, her peers pounced.

National Public Radio’s website ran a story headlined “Critics Question Reporter’s Airing of Personal Views.” Among the critics was the Washington bureau chief of the Los Angeles Times, who was shocked — shocked! (Like Claude Raines in “Casablanca.”) The dean of the journalism school at the University of Maryland pronounced her remarks “ill-advised.”

The former chair of the Pulitzer Prize board executive committee said, “The reputation of Greenhouse’s newspaper is at stake when the reporter expresses her strong beliefs publicly.”

The coup de grace was delivered by her own newspaper, whose public editor recommended she not cover the Supreme Court on topics she addressed in her speech. “Ms. Greenhouse has an over-riding obligation to avoid publicly expressing these kinds of personal opinions…[and] giving the paper’s critics fresh opportunities to snipe at its public policy coverage.”

They all sounded like Chicken Little, convinced the sky was going to fall on the New York Times because one of its reporters had expressed herself on public policy. Actually, the sky had fallen two years before, when Jayson Blair was forced to resign from the newspaper for fabricating or plagiarizing half of the 72 stories he had written.

The newsroom was still reeling from that debacle, which may have been why no one stepped forward to defend Greenhouse for telling the truth. She was like the child in the Hans Christian Andersen fairytale who called out the emperor for not wearing clothes. (To the Times’ credit, she continued covering the court until she retired in 2008, when she accepted an offer to teach at the Yale Law School.)

Greenhouse blows holes through the current theory of objectivity that journalists are expected to maintain — to have no private opinions or support any private causes. According to these old rules, journalists should not contribute to their community because it might reflect negatively on their employer or tempt others to see bias in their work. Leonard Downie took this to pious extremes when he was executive editor of the Washington Post and announced that he would not vote and would stop having “private opinions about politicians or issues.”

He felt that would give him a completely open mind in supervising the newspaper’s coverage, and I suppose it would in Brigadoon. But what about the real world, where journalists might want to participate in parent-teacher associations, volunteer for community organizations, contribute to nonprofits, and — God help us — register to vote?

Greenhouse asks how journalists can be objective in their coverage by adhering to “he said, she said” reporting, as if there are only two sides to every story, when, in fact, there are usually several. Under deadline, reporters, trying to be neutral, frequently run to official sources to get their quotes for “on the one hand, on the other hand” presentations. The advocates’ words could be lies or, to use the newspaper euphemism, “factual untruths,” or benign lobbying for their particular causes.

If their words come to the reader without context or correction, they gain credibility for simply being quoted in the news. Hardly neutral reporting. In fact, just the opposite, as these journalists, striving to be fair and balanced, are, according to Greenhouse, doing what they most dread —deferring to power.

Normally, a journalist writing about journalism is like a golfer writing about golf; interesting only to those who play the game. In this case, though, we’ve got a Babe Didrikson Zaharias holding forth on a subject for which she holds the field, and her subject is not “just” journalism, as if journalism is a mere incidental that can be shrugged off with indifference.

In arguing for more context in reporting, Greenhouse echoes the wisdom of Felix Frankfurter, who said: “The responsibility of those in power is not to reflect inflamed public feeling but to help form its understanding.”

While her questions are provocative and meant to be pondered, her style is cool, analytical, and without hyperbole. She writes with restraint and offers no harsh criticism of her former employer. To the contrary, she recognizes the premier position the New York Times holds and wants nothing more than for the paper of record to excel in its mission to inform.

Journalism affects all of us — locally, nationally, internationally. For it’s through journalists that we learn what’s happening in our world and how to traverse its shoals. Journalists are our eyes and ears, and without seeing and hearing, we’d be blind and deaf, unable to function. Linda Greenhouse’s little 192-page book is a big contribution and deserves our attention.