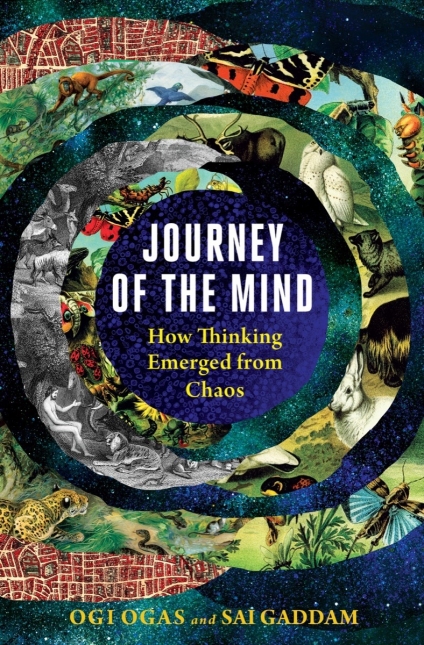 Journey of the Mind: How Thinking Emerged from Chaos is a jarring accomplishment. It’s a heroic attempt to explicate the essential nature of thinking that overturns assumptions, pricks human pride, and maybe even puts a scare into the reader. It’s also an energetic exposition that begins as a biology lesson and winds up offering an evolutionary argument for kindness. It will almost surely change your mind about the mind.

The authors are two scientists — Ogi Ogas and Sai Gaddam — who succeed in making complex ideas accessible to the general public. (Ogas is so comfortable venturing out of the ivory tower and into the public square that he was once a contestant on TV’s “Who Wants to Be a Millionaire?”)

Scientists undoubtedly enjoy the ease and prestige of using jargon amongst themselves, but they also seem to value the ability to explain complicated concepts to us slack-jawed laymen.

That’s why in popular journals and documentaries comets are downgraded to “dirty snowballs.” And it’s why, here, the mind becomes a basketball game, and we’re introduced to exemplary animals with goofy names like the single-celled organism Archie the Archaeon and a roundworm titled the Duke of Dirt. Though a bit cloying, this attempt to make the intellectually daunting friendly and familiar is welcome, at least to this member of the untutored masses.

The book starts by scaling the steps of the mind’s complexity chapter by chapter, from simple microscopic combinations of “sensors” and “doers” that can achieve no greater feat than to move unsteadily toward the light; through frogs who can position themselves to target flies; to chimps who weigh risks and rewards. You’d probably guess the top of the list was the human mind, but the authors keep right on going to explore instances of collective human thinking they dub “superminds.”

This is not the only time the book demands humility of its readers. The authors scold us for taking excessive pride in our own awareness — committing the sin of “consciousness privilege” — because this misplaced belief in its specialness impedes our ability to understand it. Consciousness, they assure us, is not magical but rather, like any other mind component, is “designed to fulfill a purpose.”

(Speaking of design, they dismiss the concept of “intelligent design” with the argument that the mind and body could have been made much better.)

What is this consciousness we’re not supposed to gush over? Apparently, it’s just a “distinctive local mental activity embedded within global mental activity operating at multiple hierarchical levels of mind.” So, get over it.

The authors are apostles of a cognitive scientist named Stephen Grossberg, whom they confidently rank with Isaac Newton for, among other things, the absolute novelty of his approach to his chosen subject. Just as Newton had to invent a new kind of math — calculus — to explain his revolutionary insights into the motion of objects, so the authors tell us Grossberg had to manufacture entirely new ways of thinking about thinking.

When Grossberg entered the field in the early 1960s, opinion on the nature of the mind was split between the Freudians — for whom thinking was an ephemeral phenomenon best explored through psychoanalysis — and the neurologists, for whom it was a tangible mechanism of chemical interactions indistinguishable from the brain.

Grossberg found neither model satisfactory. His central new idea was that the mind is not a thing but an activity — not something you use but something you do. Hence the basketball analogy. But he also argued that the mind was not an airy concept but very much seated in the human body.

“Resonance” is another key Grossberg theory. The idea is that the mind allows us to understand and react to our environment by taking outside stimuli, comparing them with internal concepts, and seeing how well they match up. Also important is the “complementary thinking principle,” the concept that different parts of complex brains like ours — called “modules,” each with different skills — cooperate to make sense of existence.

The book is full of startling, delightful insights. Birdsong is the simplest “representation” — visual, aural, or other type of input — that can be shared across minds: One bird chirps, and another one a few trees over gets an idea. And that’s particularly interesting because processing bird calls or any other sound is much harder than processing sights, because sights generally stay put, whereas sounds disappear. What’s more: “The self is made of language.”

The authors counsel us not to fear artificial intelligence — robots enslaving humans — because AI will always be grounded in its creators, us. They don’t offer similar reassurance to “Star Trek” fans who fear and despise the collectivist Borg, or any other worried individualist afraid of being swallowed up by the whole: It’s already happened. By virtue of living in a literate society, you and I are already components of a supermind.

That’s not such a bad thing, they maintain, because only a supermind could have gone to the moon or conquered smallpox. But that’s where the kindness comes in: It’s up to each of us little neurons to try to nudge this supermind in the right direction, always moving like our single-celled friends toward the light.

William Rice is a writer for political and policy-advocacy organizations.