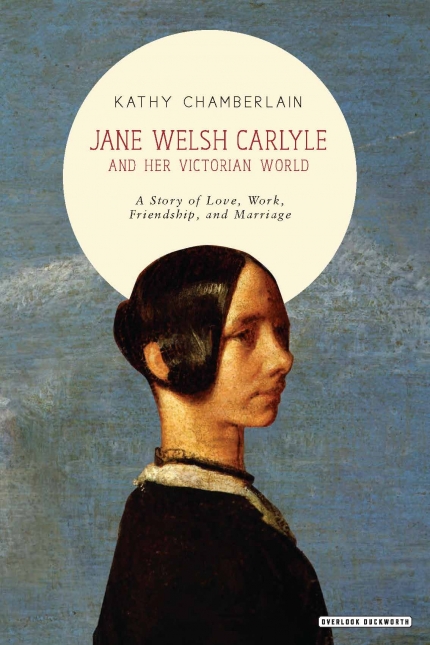 In this fascinating, meticulously researched study of Jane Welsh Carlyle, Kathy Chamberlain provides an intimate portrait of her subject from 1843 to 1849, the “years of her richest experience and development.”

More than a biography, Jane Welsh Carlyle is an absorbing depiction of Victorian society in transition, and of the various ways in which Jane was involved in the issues of her day, including the treatment of the mentally ill, hypnotism, slavery, the situation of the poor, Italian independence, and “womanness.”

Jane Welsh was born and raised in Scotland. In 1826, she married Thomas Carlyle. As Thomas’ literary career began to soar, they moved to London, where they socialized with numerous prominent thinkers, among them Ralph Waldo Emerson, Charles Dickens, Alfred Tennyson, William Makepeace Thackeray, Frédéric Chopin, and the women’s advocate Geraldine Jewsbury, who became Jane’s close friend.

However, Jane’s exhilarating existence was disrupted by the discovery that Thomas had become involved romantically with Lady Harriet Baring, a charismatic and “formidably intelligent” society hostess.

Lady Harriet insisted on including Jane in her social gatherings, perhaps to hold the gossips at bay, but the frank, unpretentious Jane felt out of place at the grandiose events. In spite of some progressive leanings, she believed in the social hierarchy and thought people should keep their place.

Furthermore, Jane was also growing increasingly angry about her husband’s incessant fawning over the imposing aristocrat. The situation led to several quarrels between Jane and Thomas, with Thomas continually accusing Jane of baseless jealousy. Yet Thomas repeatedly broke his word to stop seeing Lady Harriet. Divorce was out of the question in Victorian England, and so Jane endured.

While Lady Harriet was concerned primarily with leisure, Jane was concerned with meaningful work. She believed that a woman suffered “if she had no purpose, no mission, no hard work to do.” Furthermore, “Not having real work could leave a woman all the more vulnerable” to emotional upset.

In order to make herself useful, she ran a kind of employment bureau, finding governess positions for women so that they could earn a living. One of the beneficiaries of her project was Amely Bölte, a German freethinker whom Jane sometimes found annoying, yet who became a good friend. Bölte went on to have a career as an author and translator.

Although Jane did not become a professional writer, she wrote for most of the day and came to see writing as her vocation. Her work consisted almost entirely of personal letters, although she eventually branched into memoir. She considered her letters an expression of individuality, what she called “I-ity,” a notion of selfhood that “indicates an emerging sense of personal agency,” says author Chamberlain.

Filled with wit, metaphor, and astute observations of London society, Jane’s letters earned her the admiration of some of the most influential men and women of her day. In time, Jane developed a letter-writing aesthetic.

“Her best letters,” says Chamberlain, “were frank, free-flowing, and particular — and followed the caprice of the mind.” Letters could also be a weapon. After one especially wretched quarrel with Thomas, Jane refused to write him while they were separated, causing him great distress.

One of the burning issues of the day was “proper conduct” for women. Jane had been raised to accept obedience to her husband as a duty. The notion of the woman as “the angel in the house,” popularized later by Coventry Patmore in a narrative poem, was widespread.

“Despite some countervailing trends, it was generally thought that [obedience] preserved the intrinsic angelic goodness of the pure, uncorrupted feminine character,” writes Chamberlain.

Jane knew several women’s advocates, including the American journalist Margaret Fuller, whom she found rather superficial, and the British social theorist Harriet Martineau. Yet Jane wavered on the woman question.

While her friend Geraldine Jewsbury passionately defended women’s potential in a letter, foreseeing “a precious mine of a species of womanhood yet undreamed of,” Jane wanted to read more on the rights and possibilities of women before committing herself to the cause. Chamberlain notes that, in spite of Jane’s ambivalence, in the 1850s she signed a petition for a women’s property-rights law.

Another important issue for Jane was Italian unification, thanks to her friendship with the revolutionary Giuseppe Mazzini. At the time, Italy consisted of several separate states, some of which were dominated by foreign powers, and Mazzini was working in London for Italian unification and independence.

Jane was also concerned with the uprisings in Poland and the unrest in France, as well as the plight of the poor in Ireland, where a million people died during the Great Famine. The 1840s were a period of turbulence and change in Europe, and Jane kept abreast of events.

Jane Welsh Carlyle and her Victorian World paints a vivid picture of the Carlyles’ milieu, especially the lively discussions that took place in their home, where some of the most brilliant minds of the century connected or collided.

It also provides fascinating details about the running of a Victorian household — the constant sewing and repairing, the spats with servants, the unexpected guests. We also learn of the ubiquitous fear of illness and of the primitive medical practices. Kathy Chamberlain has written an absorbing and informative book, one that greatly expands our understanding of women’s history and the Victorian era.

Bárbara Mujica is a novelist, short-story writer, and essayist. Her latest novel, I Am Venus (Overlook Press), explores the identity of the model for Velázquez’s Rokeby Venus. Her previous fiction includes the international bestseller Frida, based on the relationship between Frida Kahlo and Diego Rivera, and Sister Teresa, based on the life of Teresa of Avila. Mujica has won several prizes for her short fiction, including the E.L. Doctorow International Fiction Competition, the Pangolin Prize, and the Theodore Christian Hoepfner Award for short fiction. Three of her stories and two of her novels have been winners in the Maryland Writers’ Association national competition. Much of Mujica’s scholarly work deals with women in early modern Spain and women’s letters. Two of her books on the subject are Women Writers of Early Modern Spain: Sophia’s Daughters (Yale University Press) and Teresa de Ávila, Lettered Woman (Vanderbilt University Press).

The Invisible Siege: The Rise of Coronaviruses and the Search for a Cure

Meet the warriors trying to save us from the next pandemic — and ourselves.