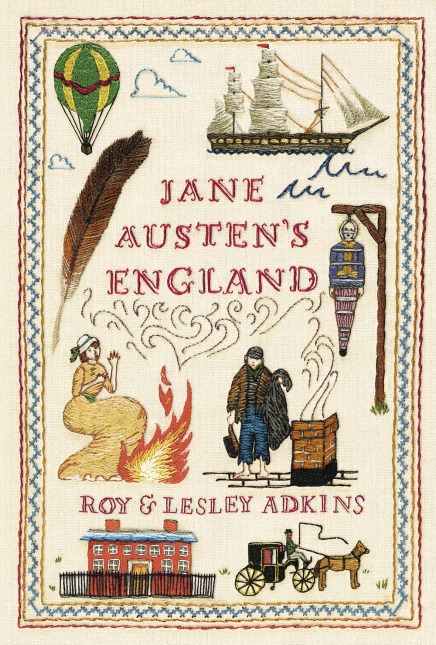 Most of Jane Austen’s England is about a country you do not encounter in Jane Austen’s novels. This meticulously documented social history by Roy and Lesley Adkins has much more to say about the struggle for survival of the poor than the mating dance of the gentry.

Although the authors open each chapter with a quotation from one of Austen’s novels and include comments from her letters, Austen is not the major source of information about the England of her lifetime (1775–1817). The authors rely more on the diaries of two English clergymen, William Holland and James Woodforde, who provide not only details of daily life, but also their attitudes toward the behavior of the people they observe. Quotations from the journals of Nelly Weeton, a governess, offer a female point of view. The observations of visitors to England are supplied primarily by Benjamin Silliman from America and Carl Philipp Moritz from Germany.

The book is organized according to the life cycle, starting with marriage, then birth, childhood, illness and death, with chapters on work, travel and crime, among other topics. It becomes clear very quickly that life is grim for those without money. While still quite young, children are forced into dangerous labor as chimney sweeps or sent to work in coal mines. A young man could be swept up by a press gang and hustled off to sea.

Even in a chapter on fashion, the reader is reminded that lace “was frequently made in deplorable conditions by women and children.” Washing of clothes is described in detail — a tedious process since water was not piped into most homes. In many cases, clothes and bed linens were rarely or never washed but used until they rotted. The authors follow this discussion with one about sanitation, leading 21st-century readers to conclude that it did not exist to any degree that they would recognize.

No aspect of life covered in this book is free from gloom or gore. The chapter on religion delves into the system of tithes, which caused resentment by those hard-working laborers who had to pay tithes from their meager resources to clergymen who led much more comfortable lives. While the chapter on leisure describes theater, dances and concerts, it also lists a prize at a country fair for the one who bashes the first 10 heads with a cudgel, causing “blood to run an inch” or not be counted toward the prize. The authors note that “blood sports were regularly enjoyed by all classes. The baiting of dogs, badgers, bulls, cockerels and other animals was legal, though bear-baiting had died out because the wars with the Continent had stopped the supply of bears.”

You certainly did not want to get sick, as a common cure was blood-letting, nor would you want to have dental problems, as the remedy was extraction. If you could afford them, human teeth, taken from corpses, made the best dentures. The bodies of fit young men provided desirable dentures. So many teeth were plundered from those killed in battle that dentures made from them were known as “Waterloo ivory.”

The book does provide some lighter moments: The table of weights and measures informs the reader that there are three barley-corns to an inch and that one liter is equivalent to either 1.7313 ale pints or 2.1135 wine pints. Jane Austen’s England also contains a useful chronology, several maps, some illustrations and a bibliography, in addition to the notes and index.

If you want to know the difference between a curricle and a gig, the correct time to pay a morning call or the number of oak trees it took to build a ship of the line, you should consult Daniel Pool’s What Jane Austen Ate and What Charles Dickens Knew. If you would like to know the significance of Elizabeth Bennett being referred to as Miss Eliza Bennett or the difference in meaning of “condescending” between Jane Austen’s time and ours, then you need to read the notes in The Annotated Pride and Prejudice, one of a series of Austen novels annotated by David M. Shapard.

Should you prefer to learn about the aspects of England that Jane Austen did not write about, this volume by Roy and Lesley Adkins is for you. Perhaps, though, you might spend many happy hours with the books that inspired all of these: the novels of Jane Austen herself.

Alice Padwe has reviewed fiction, history and memoirs and has edited all kinds of books, from college texts to spy thrillers.