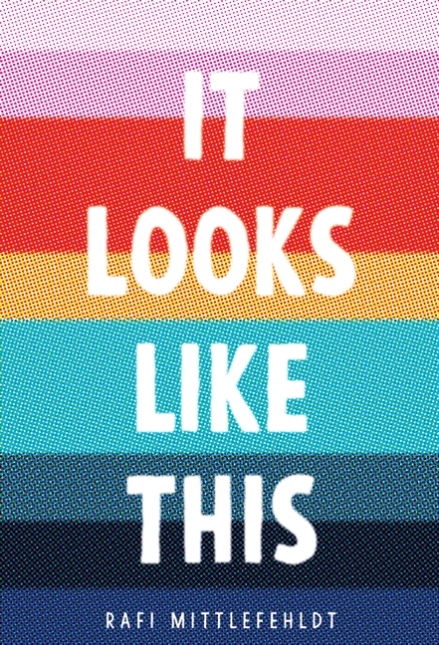 The beautiful opening of It Looks Like This recounts a sunrise following a special night between Mike and classmate Sean. “Pink, mostly. Puffs of orange just below. The fiercest yellow way ahead, far, far ahead. Red slashed all across. All of it fading to blue, getting deeper and deeper as you go out.”

As in those first lines, author Rafi Mittlefehldt’s prose is delicate and often sparse. It’s also easily the best part of his debut novel, which drops high-schooler Mike into a new school, a new city, and a new romance with another boy.

Paired up on a school project, Mike and Sean’s budding friendship quickly grows into more, yet the relationship is complicated by a school bully targeting Mike and his Christian conservative parents. As Mike and Sean’s relationship progresses, Mike is challenged to come to terms with who he is, what he wants, and whether he’s ready to take the steps to get there.

As the novel’s center, Mike functions well. He’s the quintessential “good kid.” He adores his little sister and follows all the rules, he’s respectful to his parents, and goes to church on Sundays. Even when grounded for all of his holiday break, he takes the time and the money to buy thoughtful gifts for his family.

It’s impossible not to like Mike, and after spending so much time in his head, it’s a thrill to watch him discover his voice and stand up for himself. But the book’s narrow focus often leaves other characters in the lurch.

Much like the writing style, characterization is sparse and the cast of characters have roles that are more stereotypical than fully fleshed out. There’s Mike’s father, who withholds affection and presses Mike to take up sports rather than the art he clearly considers too feminine a hobby for his son.

There’s Mike’s quiet and reserved mother, silently following her husband’s lead. There's the bully, Victor, determined to make Mike miserable just because he can. There’s the teacher Mike really likes, and the teacher Mike really doesn’t like. Other characters, like Mike’s friends at church and school, blur together; they’re interchangeable and forgettable. The exception to this rule is Mike’s daring and beloved younger sister.

Even love-interest Sean isn’t immune from these characterization pitfalls. Once you’ve closed the book, it’s difficult to recall much about him besides his relationship with Mike. He’s a decent enough person to cut off contact with Victor when he calls Mike a homophobic slur, but that’s where Sean’s character begins and ends. It’s enough to make readers at least like Sean, but not enough to get them invested in his character, which is later mostly defined by tragedy.

Despite some earnestly sweet interactions between him and Mike, Sean doesn’t seem to really exist except in relation to Mike, which makes it difficult to understand who he is when Mike isn’t in the scene. That gap in his characterization makes the book’s later catastrophe both more shocking and more disappointing as it feels like we got there only because the plot demanded it.

With the book’s sluggish pace, this tragedy becomes the defining moment. Between watching Mike walk his dog, buy Christmas presents, and perhaps most tediously, complete his and Sean’s class project, many scenes beg to be skimmed. But it all contributes to the sense of dread permeating the novel as we await the collision of Mike and Sean’s romance, Victor’s obsession, and Mike’s father’s staunch religious conservatism.

When it finally comes, the collision is just as terrible as you can imagine, and just when you think it can’t get any worse, it does. The unraveling allows for definitive and important advances for Mike, but it makes the novel’s conclusion bittersweet.

Enfolding Mike’s story in tragedy isn’t unheard of for LGBT narratives, and there’s nothing wrong with a story that focuses on some of the negative experiences of LGBT youth. But with the literature world already so saturated with stories of religiously justified homophobia and bullying, It Looks Like This feels less necessary than a story of LGBT teens who are loved and accepted from the story’s outset rather than forced to suffer their way toward having their humanity recognized.

This tragic tone doesn’t make the narrative less worthwhile, but those looking for more optimistic material for LGBT teens will have to look elsewhere.

A Change of Time