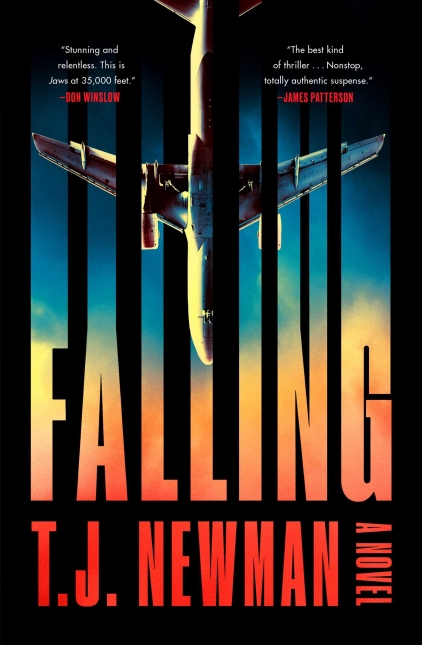 When a book’s title is a simple seven-letter word suggesting an out-of-control experience and its cover art features an airplane pointing straight down, expect turbulence.

If you read this one on a vacation that involves air travel, you may well decide to walk home.

Falling is a terrifying tale of a single cross-country flight during which pilot Bill Hoffman faces an impossible choice. His wife and children will be killed back at home in L.A. if he doesn’t crash the JFK-bound plane with 149 souls aboard.

The story unwinds in more or less real time spread over three time zones. It’s one very bad day where things somehow just keep getting worse aboard Coastal Airways Flight 416. Fans of the TV show “24” will nod knowingly when a chapter ends with a crew member saying, “We’ve got a new problem.”

Most of the challenges aren’t mechanical. They’re human.

Author T.J. Newman worked as a flight attendant for Virgin America and Alaska Airlines between 2011 and 2021. Her years of experience with airplanes and the people on them — crew and passengers like — give Falling authenticity. (Almost incredibly, she says she wrote much of the manuscript on redeyes while passengers slept.)

A planeload of characters would be far too many to follow, of course. Fortunately, Newman tracks a relatively small group: the pilot and his family, the flight’s crew, a handful of passengers, the bad guys, and some key people on the ground.

Brief flashbacks illustrate how characters became who they are, making them three-dimensional and sympathetic (and ultimately suggesting the book’s surprising conclusion). We see Bill in flight school, then as a husband and father. We meet the bad guys bonding as children watching an American movie in a faraway country. We learn the reasons for fierce loyalty between a flight attendant and an FBI agent’s nephew (who’s having a remarkably bad day, too).

Yet not everyone is who he or she appears to be — and the bad guys’ end game may not be what it seems, either.

Memories of 9/11 will always haunt air-travel professionals, especially those who were working in the industry then — like the requisite grizzled air-traffic controller in Falling who’s in the tower at JFK, hoping to bring in the Coastal flight safely.

Changes in security practices have helped make flying safer over the past 20 years. Advances in technology have helped, too, but a few of those contribute to the chaos aboard Flight 416, as when a clueless celebrity passenger posts to his popular Instagram account.

More than once, crew members cleverly resort to technological Jujitsu and turn weaknesses into strengths. A very old-school skill of Bill’s proves to be valuable precisely because it’s one that most people aren’t familiar with any longer.

Flight crews don’t always know each other. They’re assigned based on a host of variables, including seniority, government requirements for rest time, and labor contracts. The pilot, the co-pilot, and the flight attendants for a large airline might not have worked together often or perhaps ever. Some have been on the job for years, while others are just starting out. But as Newman shows, they’ve all been trained to work together and count on each other to deal effectively with every conceivable emergency.

Most flight-attendant training has nothing to do with serving drinks and meals. Similarly, making reassuring announcements is far from the most important job up in the cockpit. Flying has been described as “hours and hours of boredom sprinkled with a few seconds of sheer terror.” To avoid fatal mistakes in setting priorities, pilots are taught to Aviate, Navigate, and Communicate — in that order.

As one of the characters in Falling observes, Captain Sullenberger proved the value of that approach in 2009 by successfully landing a crippled A-320 in the Hudson River with only a few serious injuries to the 155 people aboard. When the air-traffic controller offered emergency-landing options, Sully focused on flying the plane. His terse responses were “Unable” and “We’re gonna be in the Hudson.”

The unflappable Sully was everyone’s hero for his efforts, and no less than Tom Hanks played him in the 2016 movie “Miracle on the Hudson.”

Falling is surely destined to be a blockbuster, as well. Because it’s fiction, no one will be surprised to learn that someone other than a pilot (and who could never be mistaken for Sully, or even Hanks) ends up at the controls.

You might stop breathing during the harrowing final approach, but first-time author Newman lands the story thoughtfully and confidently.

Randy Cepuch is a retired business writer and million-mile flier who, since writing this review, has flown to and from LAX — uneventfully.