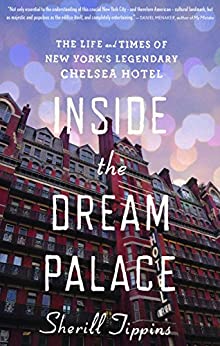 If The Eagles’ “Hotel California” is the place where one can “check out anytime you like, but you can never leave,” then New York City’s Chelsea Hotel may be where you can check out anytime you like, but it never leaves you. With Inside the Dream Palace: The Life and Times of New York’s Legendary Chelsea Hotel, author Sherill Tippins has produced, not just a history of the building, but its definitive biography, a thorough, engrossing telling of the lives the Chelsea intersected, the dreams it inspired and dashed, and the legacies it launched.

When the Chelsea opened in 1884, there truly was no other place like it: A mix of Gothic and Queen Anne styles, walls three-feet thick, fireproof plaster, intricate ironwork; and modern conveniences too: Otis elevators, 1,800 electric lights, gas cooking and “speaking tubes for easy communication.” But the Chelsea’s architect aspired to do more than appeal to New Yorkers’ interests in safety, style and convenience.

French-born architect Philip Hubert had anchored the Chelsea’s foundation in Manhattan bedrock and its operating principles in the utopian philosophy of Charles Fourier. Hubert was “born on the barricades” of the 1830 revolution in Paris. His architect father, Colon Gengemmres, and other Fourieriest followers, were frustrated by the divide between rich and poor and stymied in their efforts to construct self-contained communal “phalanestry” housing for fellow utopians in Paris. The author carefully sketches the lineage from revolutionary Paris to Hubert’s arrival in 1849, and then on to the explosion of the middle class in New York and the creation of the Chelsea.

Hubert aimed to appeal, not to the Gilded-age denizens of Park Avenue, but to the middle class that was being forced to leave Manhattan for affordable apartment housing. From the start, the Chelsea’s resort-like spaciousness attracted a diverse group of residents from Valvoline founder and homeopath proponent John Ellis to Samuel Clemens. The hotel residents provided that “brash modern assemblage that … Clemens most enjoyed — and the type of crowd that most appreciated Clemens in his public persona of Mark Twain.”

Tippins writes that the “burgeoning creative subculture” of Chelsea in the late-19th century first sparks the “fire of artistic nationalism.” Indeed, it’s hard to summon names of many significant American writers, poets, painters and performers who did not live or stay at the Chelsea at some point. From Dylan Thomas to Bob Dylan, from Virgil Thomson to Leonard Cohen, from John Sloan to Christo, the Chelsea not only provided housing but somehow nurtured or inspired them as well.

The book tells several remarkable stories about the creative process; chief among them has to be the story of Arthur Miller’s writing of “After the Fall.” Miller had returned to the Chelsea in 1962 to write his “Third Play,” which Elia Kazan would direct in the new Lincoln Center. By creating some less-than-fictional characters in the script, Miller would come to terms with, among other things, his mercurial marriage to Marilyn Monroe (who had recently committed suicide) and his lingering resentment over Kazan’s cooperation in the 1950s with the House Un-American Activities Committee. The Chelsea seems to serve as both pressure cooker and respite as Miller struggles with his most personal of plays.

The author also reports in unvarnished and dispassionate prose the unraveling of the creative process. Stories of the rise and fall, or fall and rise, of people like Dylan Thomas, Edie Sedgwick (Andy Warhol’s lover/co-star) and Dee Dee Ramone echo through the eight decades covered by the book. Tippins writes that “death and illness were a part of life, and life went on with its gossip and debates, friendships and resentments, as old residents and new clients and staff faced the vicissitudes of New York life as a generally cohesive unit.”

Like the subject of any good biography, the Chelsea is changed by the events and people it encounters. Dual recessions in 1893 and 1903 force the owners to convert it from apartment building to resident hotel. Unexpected guests arrive — survivors of the 1912 Titanic sinking; World War I sailors and soldiers; European refugees during World War II; performers from the new Fillmore East in the early 1970s. City coroners show up at least twice: following the death of Dylan Thomas in 1953 and the murder of Sid Vicious’ girlfriend Nancy Spungen in 1978. Tippins notes a journalist’s comment in the mid-1960s that “the Hotel Chelsea had become a virtual “Ellis Island of the avant-garde”. Certainly, like the real Ellis Island, there were some who handled the passage better than others.

While Inside the Dream Palace seems to spend equal time outside the walls of the Chelsea in the broader New York and American cultural scene, the author paints vivid images of some residents’ incredible dwellings. George Kleinsinger, composer of the children’s symphony “Tubby the Tuba,” had a jungle-like penthouse apartment with “trees imported from Borneo and Madagascar” and a “menagerie of exotic birds, tropical fish, a five-foot iguana, a pet skunk, a monkey, and an eight-foot python.”

Tippins’ telling of intersecting lives, events and stories can be as complex and labyrinth-like as the Chelsea corridors and apartments themselves. There are occasions where a story delves deep into detail, and readers may find themselves desperate for a date, a point of reference to anchor the event. But that’s a small complaint in an otherwise remarkable and valuable history of a cultural, artistic and architectural icon.

Bill Scanlan has been a producer and host with C-SPAN since 2002. His first documentary film, “The Bayou: DC’s Killer Joint,” premiered on Maryland Public TV last February and has aired on over three dozen public TV stations across the U.S.

A well-researched, sobering look at “big agriculture” in America.