An exuberant if overstated ode to…well, you know. 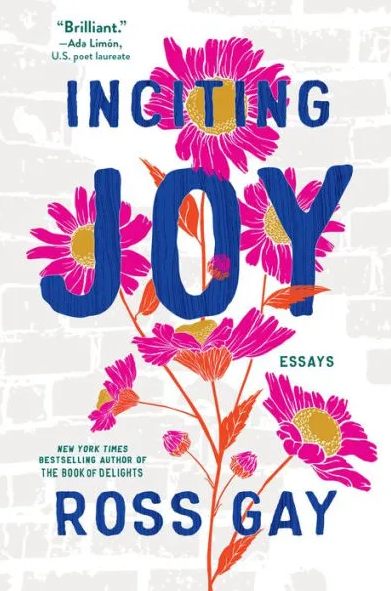 “What if joy is not only entangled with pain, suffering, and sorrow, but is also what emerges from how we care for each other through these things,” Ross Gay asks in his new essay collection, Inciting Joy. A relevant question in this season, this year, this epoch. Joy is a difficult and risky topic to write about, especially for a Black man, Gay asserts, as he takes on the challenge he’s grappled with before in both a collection of essays, The Book of Delights, and in his award-winning poetry collection, Catalog of Unabashed Gratitude.

While some have validated his efforts to celebrate the joyous, others have misunderstood him; for example, this man, who confronted Gay: “‘When all of this is going on’ — he held his hands up as though to imply war; famine; people all over the world in cages…disease; sorrow immense and imperturbable…‘why would you write about joy?’”

Gay responded to that question and others by writing this book.

He doesn’t trivialize or simplify. This joy is not a “room at the top of a flight of stairs that…washes you with clean air and glad music.” He drills down on how hard-won joy is and has been for the marginalized, the poor, the person of color, the other. And throughout, he praises the persistence and insistence of joy — seen particularly when people come together in response to loss and pain as well as pleasure — and celebrates how connection incites it. The premise is not new, but Gay offers a fresh take on how often the proverbial lotus is rooted in mud.

He counsels readers to “lay down our swords and invite sorrow in…make sorrow some tea from the lemon balm in the garden.” Invite everyone to come bearing their troubles and make a potluck of sorrow, he suggests. Gay also calls out cruelty and gives examples of how he, like everybody else, hasn’t just suffered pain but has caused it. At his potluck:

“Sorrow is drinking from a mug given to us by someone we’ve hurt.”

Drawing on his experiences as a son, brother, lover, friend, student, teacher, college athlete, and community gardener, Gay explores different “incitements” to joy in each essay, such as a family deathbed, a pick-up basketball game, covers of favorite songs, a dance party. Each piece’s featured incitement illustrates joy as a necessary response to life’s mixture of agony and ecstasy and reminds us that joy is magnified via community.

The author’s voice is enthusiastic and generous — he’s a self-proclaimed believer in giving all he’s got to the page. He’s committed to digression, never choosing the shortest distance between two points, appending numerous footnotes to each brief essay. Gay often uses these citations as shout-outs to someone he’s loved, learned from, or been inspired by. For him, there’s no such thing as too many thanks. He knows he risks going over the top but goes there anyway, declaring that there is “no blathering on enough to gratitude.”

Profound gratitude is infinite, part of giving and receiving joy, and Gay’s abundant thankfulness is an integral part of his response to the “incitements” he explores. However, his lengthy citations and repetitious, convoluted digressions can be distracting, interrupting the narrative flow and the reader’s engagement. Though the author might disagree, you really can have too much of a good thing.

In the powerful “Grief Suite: Falling Apart, The Thirteenth Incitement,” Gay reflects — and reflects some more in a footnote — on the efficacy of “suspenseful, writerly brevity.” He recalls the impact of a simple note he wrote to an abusive college football coach after an episode of demeaning criticism. “Coach, I was looking for you, Ross.” That’s all he wrote, and he posted it on the coach’s door. It may not have been all he needed or meant to say, but “the next day before practice Coach approached me, a little nervous.”

Sometimes, less is indeed more. Perhaps Gay might’ve occasionally chosen brevity over excess and increased his impact here. Nevertheless, he chooses to write generously, even if to a fault, well aware of the risks. He neither holds back nor filters, writing the way he exhorts his students to:

“Sharing what we love is dangerous, it is vulnerable, is like baring your neck, or your belly, and it reveals that, in some ways, we are all commonly tender.”

Ross Gay is likely spellbinding in the classroom, as well as at those community potlucks. Inciting Joy cries out to be heard, to be read aloud in the author’s own emphatic voice. So, keep an eye out — rather, an ear open — for the audiobook. It may be the best way to extract maximum joy from this work.

Barons of the Sea