In Twenty Years: A Novel 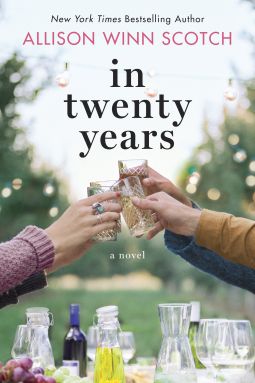 At the start of Allison Winn Scotch’s new novel, In Twenty Years, readers are introduced to six cohabitating Penn graduates-to-be, described by their ringleader, Bea, as “a six point star.” As an Ivy League undergrad myself, I couldn’t help but feel a kinship with them. They seem like a reflection of my own group of friends at Yale; also coed, also a kind of second family, and also with a history of shared experiences mapped across a college campus.

Which made reading the rest of the book very, very scary. At graduation, no one (or if they’re being honest, everyone) thinks about the possibility that they will experience loss, see their dreams fizzle, and grow apart from their friends.

Yet this is exactly how we find the tenants of 4120 Walnut Street as they return to their old stomping grounds after the novel’s titular 20-year (or thereabouts) time jump. Reunited by the deathbed request of the now-deceased Bea, the remaining five confront their past and future in the place they once called home, among the people they once called family.

In Twenty Years is, among other things, a novel about people being miserable. Which doesn’t make it a miserable read by any means. Even when you just want to knock some sense into these remarkably juvenile adults, they are still capable of warmth, humor, and complexity. In this, the book shares similarities with The Nest by Cynthia D’Aprix Sweeney.

The main cast — whose personalities take a little time to feel real — includes Lindy (rock star past her prime, with some bad habits), the now-married Catherine and Owen (Martha Stewart-esque mogul and dissatisfied house husband), Annie (trophy wife covering her doubts with an Instagram filter), and Colin (knight/plastic surgeon in shining armor).

Refreshingly, there is no obvious hero, no universally wronged party — except maybe Bea, who narrates the first and last chapter of the book. While the bulk of the novel uses third-person narration filtered through multiple characters’ points of view, Bea’s voice is never completely forgotten. Readers will hear her whisper in recounted memories and flashbacks, and in the moments where the characters finally admit their truths and faults to themselves.

Even from beyond the grave, Bea remains their confidante and mediator, the glue that holds them together. The last chapter, where she watches the fragile peace achieved by her friends, seems to acknowledge her continued presence in some form. It could be a kitschy ending, but given the very real imperfections of the group, it manages to be a bittersweet closing with true depth.

But despite Bea’s importance, the book is not about her, or even the aftershocks of her loss. Scotch refrains from playing up Bea’s early death as the sole reason for the friends’ present strained relations. Instead, as details from the passing years trickle in, readers discover that the characters had already lost touch and fallen out in degrees, only reaching a breaking point with the events of Owen and Catherine’s wedding, and Bea’s death soon after.

See, the five are not just held back by their refusal to face Bea’s death. In comparison, that would seem trite. Instead, it’s the relationships with one another that need repairing; fixing cracks that started while they were still in school. This gives them a lot more to work on, which in turn gives readers a lot more to chew on.

Shifting between points of view isn’t always a successful technique, but it serves Scotch’s characters well here. As the group’s reunion only spans a few days, the changing perspectives allow Scotch to get the most out of her plot, retracing steps from previous chapters with a more precise angle on different characters.

These zoomed-in chunks make a large cast easier to keep tabs on. Though at times, I found myself wanting more: more internal dialogue, more backstory, more to differentiate the characters. Catherine and Colin felt particularly under-represented. And while some information was covered succinctly and to satisfaction (Annie and her husband’s relationship; the rise and fall of Catherine’s craft empire) other storylines felt too scarce (Bea’s childhood brushes with death, Annie’s unhappy childhood).

I was also struck by how little impact the adult characters’ children had on their lives. Given the overarching themes of growing older and facing change, it seemed a missed opportunity not to explore the children’s role in their parents’ psyche.

However, this omission is an example of Scotch’s authorial control; spanning many years, the novel is broad, and at times patchy, but never unwieldy. Besides, the magic of 4120 Walnut Street is that it gives these adults a chance to shove their future selves and all the accompanying responsibilities aside and be kids, if only for a few days. They certainly drink like they’re in college again.