In the Neighborhood of True

In the 1950s South, an expat New Yorker teen strives to hide her Jewishness. 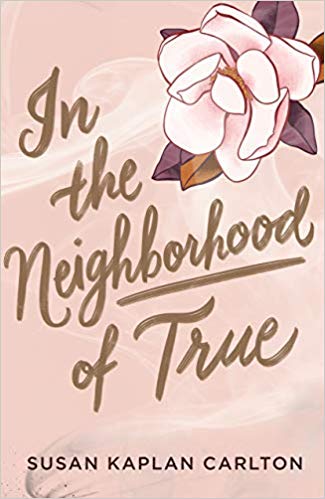 Susan Kaplan Carlton’s In the Neighborhood of True tells a timely story set in the not-so-distant past. In the late 1950s, a teenage girl, Ruth, is displaced, along with her mother and younger sister, from her native New York and sent to Atlanta after her father’s passing.

But Ruth soon discovers that to fit into the glamorous world of Southern debutantes and Christian private school, she must hide an important aspect of her identity: her Jewishness. Thus, she begins to lead a double life, splitting her time equally between tea and temple.

From the novel’s outset, Carlton establishes a voice for Ruth that is pithy but rich, presenting the reader with phrases that are evocative while still managing to sound like something a teenager would say. When Ruth describes her rabbi as someone who looked “like he’d possibly be good at tennis,” I could picture him exactly — and I laughed, knowing it was the same sort of silly thought I would have about someone.

But whereas the author’s prose is relatable and pleasant, her plot is a bit slow to the punch.

For the first several chapters, there is a distinct lack of tension. There’s little drama, for instance, in Ruth’s encounters with her conservative grandmother, Fontaine, who expects her to become a debutante and abandon her Jewish heritage.

There is also sparse friction between Ruth and her Jewish-convert mother, who requires her daughter to attend synagogue and who teaches her about Georgia’s Confederate history; between Ruth and Max, an integrationist who invites her family to protests; and between Ruth and Thurston-Ann, a friend who calls Ruth’s dark eyes “exotic” and remarks that her father believes New York is full of “commies and Jews.”

Maybe the idea is that Ruth is acquiescent in most situations because all she wants is to fit in everywhere — amongst the worshippers at the temple and amongst her high-society friends. But, even so, her internal conflict over keeping her heritage a secret is not enough to carry the story, and the first half of the book suffers for it.

Luckily, once the ante is indeed upped, Carlton handles the gravity of racial prejudice, anti-Semitism, and hate crimes excellently. Beautiful lines like, “We’re sometimes fooled into thinking hatred doesn’t happen here because the magnolias are in bloom,” manage to invite introspection about America’s current political climate without sounding preachy.

There are, however, a few missteps. One part that troubled me was a short, romantic scene in which Ruth and her beau, Davis, play in her grandparents’ pool just hours after tragedy strikes her community. This tonal shift was off-putting; even if this were a realistic way for Ruth to cope with the trauma of the situation, readers deserve more time to process the book’s heaviest moment — especially considering how closely that moment mirrors so many recent hate crimes.

Episodes like that also made me feel as though In the Neighborhood of True was a bit too invested in Ruth and Davis’ romance. It was certainly a prominent part of the story, but at times, instead of helping to serve the book’s central themes of segregation and oppression, the romantic antics drew attention away from them.

That’s not to say that I disliked the romance in general. Davis serves an important role, playing a part that will be painfully familiar to most readers. He is a bystander — someone who acknowledges that, yes, social change (in this case, integration) is good. But he expects it to happen around him; he doesn’t feel the need to actually make anything happen. And when cruelty is occurring right in his back yard, he prefers to deflect, to avoid choosing “sides.”

In this way, he is perhaps the most important character — he reminds us to look inside ourselves and face our own complacency. After all, in the age of Facebook profile frames and tweets about “thoughts and prayers,” it’s more possible now than ever before to feel like we’re making an impact when we’re actually doing the bare minimum. In contrast, the older, wiser Max, who also attracts Ruth’s romantic attention, makes direct action seem much more appealing.

Though Carlton has trouble with the book’s pacing, it’s worth pushing through the less-than-exciting chapters about Ruth palling around with her debutante classmates. Once the narrative hits its stride, the author presents a story of identity and oppression that many American teens will find familiar, written in some of the finest prose I’ve ever read in a young-adult novel.

Johanna Alonso is entering her senior year at UMBC, where she is pursuing a double major in media & communication studies and English literature. During the spring 2019 semester, she interned at the Washington Independent Review of Books, and she currently interns at UMBC Magazine. Her writing can also be found in UMBC’s student newspaper, the Retriever, and on mdtheatreguide.com.

Strong action and images can’t overcome the weaknesses in this ambitious work.