In the Land of the Cyclops

The provocative Norwegian author ponders the meaning and necessity of art. 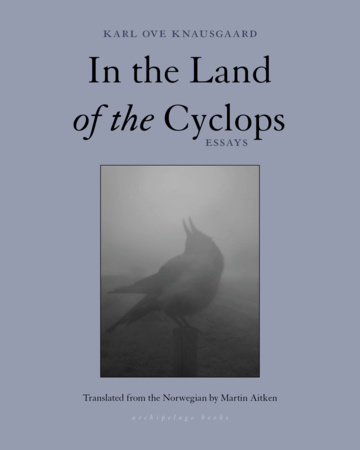 When the first volumes of My Struggle, Norwegian writer Karl Ove Knausgaard’s autobiographical novel, were published, his countrymen became so obsessed with his titillating revelations that workplace productivity dropped. Employers instituted Knausgaard-free days. His newest book, a collection of essays titled In the Land of the Cyclops, may prove to be less salacious but no less provocative. Or, at least, no less thought-provoking.

Neither confessional in the vein of David Sedaris nor meditative in the style of the Atlantic’s James Parker, these essays suggest the philosophical mode of Emerson, that of an observant, detached, analytic, earnest, and fearless interlocutor whose intellect ranges over a landscape as vast as the Scandinavian night sky.

What is art? Knausgaard asks. How do artistic boundaries forge meaning? How are dreams and literature alike? Why do communities create myths? What is the invisible force hidden within the visible world? And how does art manifest that inner reality?

Over the course of 18 essays, Knausgaard uses literature and photography as mediums to interrogate the interstice between epistemology and ontology and how the friction between the two gives rise to art.

In “Pig Person” and “Inexhaustible Precision,” he examines the photographs of Cindy Sherman and Sally Mann, respectively. Their pictures strip away society’s preconceptions and fix for all time the quiddity of an image, which, despite its revealing starkness, suggests a deeper reality, one only the viewer’s inner eye can see.

In “Welcome to Reality,” Knausgaard explores how the wondrous photographs of Francesca Woodman derive their power from “the disparity between the order of things and the order of man. The singular power of the objects they depict is so great that no human gaze, no human will can encompass them.”

In the penultimate essay, “The World Inside the World,” Knausgaard again returns to photography, this time to the work of Stephen Gill, whose haunting picture of a bird adorns the collection’s cover. “Gill’s photographs,” he writes, “lie on the very cusp of the unique and the general, each image appropriating elements of both, floating in their borderland.”

Gill’s pictures are so specific to a moment or locale that they transcend the particulars of their circumstances and achieve a universality where linear time stops and an eternal now begins, and where a stream bank deep in a Swedish wood encompasses all Earth’s variability.

Writers, like photographers, must disappear from their work in order for meaning to emerge; the work must stand on its own, Knausgaard asserts. Critics who cannot separate a writer from his work are establishing the parameters of literature, what Knausgaard terms the literature of the cyclops. And to limit literature to such a monocular vision “is to say how literature must be. It is to say how literature must think. It is to say These thoughts are amiss, they’re wrong, this isn’t the way we want things. You can’t do this. You can’t say this.”

The opposite is expansive, honest literature, which Knausgaard champions, literature where no subject matter is too offensive, no character too hateful, no ending too distasteful:

“Being a writer, that means questioning my place, to not look away, but write about what’s here and also about the light of the universe.”

Given his rejection of constraint, Knausgaard’s selection of the perfect novel may come as a surprise: It is none other than Madame Bovary. The reason that Flaubert’s story set in rural 19th-century France is a masterpiece, Knausgaard says, “is that literary quality, lasting literary quality, has to do not so much with intrigue, character, and place description in themselves as with how much meaning is created with their spaces. For it is here, in the simple, easily graspable forms in which opposing forces collide and ambiguity is continually produced, that the life of a narrative arises — indeed the life of all art.”

The first 17 essays in In the Land of the Cyclops are philosophically illuminating, but somewhat didactic and stylistically ponderous. The same ideas appear several times, and Knausgaard’s digressions, while interesting, can be distracting. But then we come to the final offering, “Ten Years Old,” the one giving form to all the principles found in the rest.

In it, the child Knausgaard kneels and vomits into a toilet. He hears a man’s footsteps on the stairs. When the man opens the door, Knausgaard has gotten up and is washing his face. He holds his breath. The man closes the door and goes down the stairs. Knausgaard pulls aside the window curtain. Heaps of snow border the street and magpies are pulling apart a bag of trash. They fly to the telephone lines as the man walks out, gets into his car, and drives away.

The boy Knausgaard watches the magpies for a long time.

The words of the adult Knausgaard tell what happened. But his artistic genius makes us feel something has transpired. And it is monumental.

Patricia Schultheis is the author of Baltimore’s Lexington Market, published by Arcadia Publishing in 2007, and of St. Bart’s Way, an award-winning short-story collection published by Washington Writers’ Publishing House in 2015. Her latest book is A Balanced Life, published by All Things That Matter Press in 2018.

Bourbon: A History of the American Spirit

The ups and downs of bourbon in the U.S., from its origins, through Prohibition, to today’s craft distillers.