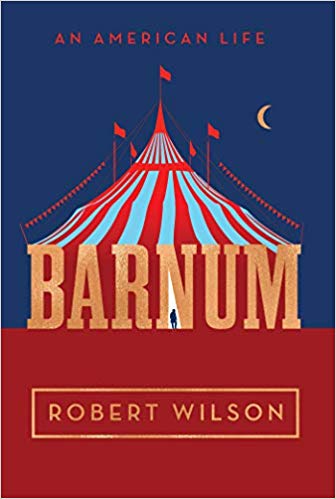 His name alone calls up mental images of over-hyped and often fraudulent schemes aimed at a gullible public. After all, didn’t P.T. Barnum himself assert, “There’s a sucker born every minute”?

Turns out, he didn’t. As author Robert Wilson tells us, this homespun canard was in widespread use long before the self-styled “Prince of Humbugs” was born.

Still, considering the “curiosities” Barnum promoted during his fabulously lucrative career, it’s no stretch to imagine the “sucker principle” as the beating heart of what we, a century and a half later, might view as his brand.

These sensationalist examples were meant to awe, but they were also calculated to deceive. Nonetheless, throughout his long life, which Wilson chronicles marvelously in this new biography, Barnum steadfastly maintained that his exhibits were fundamentally educational and family focused.

Glaring contradictions like this leap repeatedly from Wilson’s sweeping and authoritative overview of the showman’s life. And they’re most blatant when the actual details of Barnum the person are held up against the Barnum persona promoted by the impresario himself.

But the author, to his credit as a scholar, sticks to demonstrable certainties gleaned largely from documentary evidence. Much of this supporting material comes from Barnum’s own voluminous autobiography, revised and reissued several times, and from his letters and advertising copy. More objective context emerges from newspaper reports of the day and the published opinions of Barnum’s contemporaries.

Wilson is evenhanded at every turn, advancing few judgmental conclusions. He marshals the facts and allows us to measure the man for ourselves. Barnum: An American Life is that much the better for it.

Wilson gives us a prototypical 19th-century American climber, steadfast and optimistic even when enmeshed in contradictions. Barnum’s critics were many, and they included Ralph Waldo Emerson. On the other hand, Barnum numbered several of his century’s luminaries as his friends. Among them were Horace Greeley and the Swedish soprano sensation Jenny Lind, whom Barnum booked, at great expense, on an American tour. And Mark Twain considered Barnum’s autobiography to be one his favorite books.

When Barnum went bankrupt in the late 1850s (a detail largely forgotten in his legend today), it was the generosity and support of friends that helped him rebound. Later in life, he refashioned himself into a self-help lecturer, propounding his own art of the deal in a touring program entitled “The Science of Money-Making.”

His fiscal ups and downs and showbiz antics aside, Barnum, by late middle age, had become a beacon of staunch New England gentility, a philanthropist ever generous to his community who was twice elected to his state legislature and, later, mayor of the city of Bridgeport.

But he couldn’t resist the lure of ostentation, even in his private life (and, perhaps more remarkably, even in Connecticut). He built an opulent mansion, which he dubbed “Iranistan,” invoking the exotic allure of the East. Regrettably, this edifice, like two of his Manhattan “museums,” was destroyed in a midnight fire, the bane of Gilded Age real estate.

An ardent abolitionist, Barnum continued to champion the cause of equality for former slaves into the late 1870s, even though his home state of Connecticut remained a hotbed of post-war Confederate and racist sympathies. This much-bruited egalitarian passion is hard to square with the racist and exploitative exhibits catalogued above, not to mention Barnum’s own brief, if uncomfortable, interlude as a slave owner early in his career.

For sophisticated moderns like us, habituated to Barnumesque flimflam by the PR-advertising machine ⸺ not to mention social media, reality TV, and day-after-day political claptrap ⸺ there’s little room for surprise at the difference between created brand and lived reality. In his new book, Robert Wilson, taking a road to the truth that’s both subtle in presentation and authentic in effect, strikes exactly the right balance.