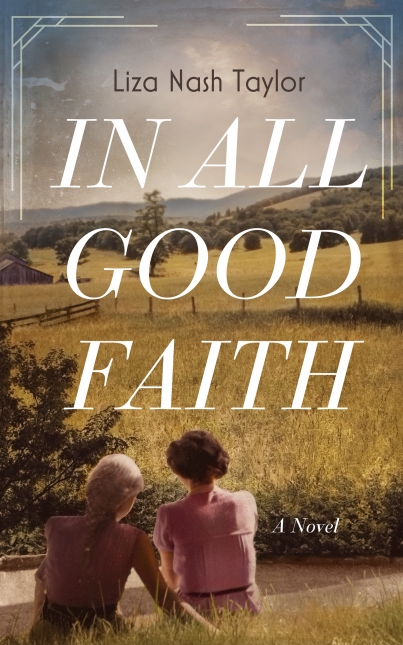 In her second work of historical fiction, Liza Nash Taylor brings us to early 1930s Virginia, New England, and many locales along the road in between. In All Good Faith is meticulously researched and detailed — from the glass jars of pickles and beet-pink eggs in the Keswick Market, to the “golden-hued marble lobby” of the Boston Public Library, to a bedraggled campsite beside the Anacostia River in Washington, DC, where “heat shimmered from scrap metal shack roofs and tents were pitched at odd angles.”

I felt immersed in the rich tapestry of the novel, which is a sequel to Taylor’s debut, Etiquette for Runaways (but both books work as standalone tales). In All Good Faith follows the parallel stories of May Marshall Craig and Dorrit Sykes, two women who refuse to be defined by their circumstances or limitations.

In the small town of Keswick, Virginia, May is a 26-year-old mother struggling to keep her family's business afloat. In her younger and wilder days, she ran off to Paris to pursue a career in costume design. But she chose safety and stability over adventure when she came home to marry her childhood sweetheart, Byrd Craig.

May manages her father's farm and their store, Keswick Market. Though their situation is not as desperate as many others’ following the 1929 Wall Street Crash, the farm is hanging on by a thread, and May is sympathetic to the many itinerant hobos coming through town looking for work or a handout. She dreams of expanding the business both for her own family’s security and to create jobs. She and her partner, Blue, plan to start their own candy line.

But although Byrd’s law practice is drying up and his family fortune is gone, the idea of his wife working fills him with shame. May and Byrd are often at odds because she’s an unconventional woman who has chosen a conventional path with a man who is kind and loving but who has a fixed idea of gender roles. When the bank refuses May a loan and a wealthy friend offers to invest in the nascent business, May is torn:

“The offer was genuine, May knew, and it was a temptation. She ought tell Elsie that Byrd would have to agree. That was fair, wasn’t it? But that sounded so weak, so acquiescent, when she felt ready to move forward, now...She, May Craig, had at her disposal the wherewithal to create a product that would sell at a fair price; a product people wanted. She could create jobs for hungry men and women.”

Meanwhile, in Boston, 17-year-old Dorrit is a painfully shy, anxious girl who lives quietly yet daydreams about being Nancy Drew. When her mother dies suddenly, her father decides on a whim to go to DC and march with 20,000 veterans demanding the overdue payment of promised WWI bonuses. Eager for a larger life, Dorrit comes with him, only to find the state of the protestors’ makeshift camps utterly stark:

“Some shacks were simply rooves on sticks, covered with cardboard or tarpaper, and one flew an American flag. A wooden crate that might have held a grand piano stood open-ended, the stenciled, THIS END UP reading sideways. Inside, cooking pots and bedding were visible. Men lounged alone or in groups, some lying on the grass. Several stood on crutches or had rolled, empty sleeves or eye patches; some wore medals pinned to undershirts or overalls…Dorrit tried to reconcile her expectations. Nancy Drew would not be caught dead here.”

For both father and daughter, this march isn't just about the money (though they need it badly). It's an adventure, too, a chance to push back on their circumstances and expand their world. When she’s separated from her father and thrown into even grimmer conditions, Dorrit will discover what she’s capable of. Her odyssey will bring her ever closer to forging a belief in herself, and it will also bring her into May’s orbit.

The book delves deeply into issues of class, poverty, and the economic tailspin of the Depression era. The author’s strength is in the details she gives us — about everything from newspaper headlines to flour-sack dresses — and in her ability to weave these historical tidbits into the narrative in a way that feels natural, never forced. Yet she almost never touches on race. It seems like an intentional avoidance, and while I can understand not wanting to dive into such politically tumultuous waters, it's a big part of the picture to leave unexplored.

I also wished for more exploration of May’s marriage to Byrd, and an explanation as to why she returned from France in the first place. It’s realistic for a woman to be caught between her desires for independence and stability, but there’s no real reckoning about the choices she made. I wanted to understand her mindset better.

Still, In All Good Faith is intriguing, at times heartbreaking, and it’s ultimately life-affirming. It starts off slowly but really heats up, and there is warmth and kindness in these pages. I was eager to stay with these people even when terrible things were happening around them. Liza Nash Taylor pulls off a difficult trick here — writing about love, hope, and human decency without falling into sentimentality or sappiness.

Norah Vawter is a freelance writer, editor, and local-authors editor of the online magazine DCTRENDING.com.