A student from India comes to America seeking an education of the head and heart. 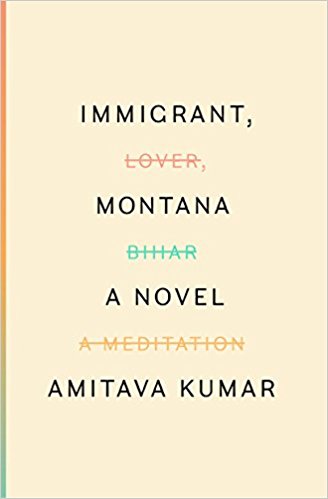 Like the immigrant who forever treads the boundaries between being one of us and one of them, Amitava Kumar’s Immigrant, Montana is both a memoir and a novel, an academic exercise and an entertainment, a love story and a tale of alienation.

Kailash is a student from the Indian city of Patna, recently arrived in New York City to attend graduate school. Like many immigrants, he answers to more than one name: Kailash, Kalashnikov, AK-47, AK, or 47.

He wants to be a writer but is studying political science under the tutelage of Ehsaan Ali, an almost cult-like figure to his devoted students who, the author tells us in the epilogue, is based upon the Pakistani leftist intellectual and activist Eqbal Ahmad.

Kailash also wants to be a lover, and the story is framed around his relationships with three women.

So, this is a tale of the (mis)education of a young man in matters of both head and heart. Indeed, Kailash and Ehsaan discuss an amorous letter of Thomas Jefferson’s to a married woman “in the form of a dialogue between his head and heart”:

“The letter was several thousand words long, Ehsaan said. This was the same man who had composed, ten years earlier, the Declaration of Independence. Which, incidentally, was much shorter than the letter.”

Kailash, however, seems often to confuse his heart with another part of his anatomy.

It is also an immigrant’s tale for the millennium. In 1965, the U.S. government passed the Immigration and Nationality Act abolishing the racist quota system that had virtually barred non-Europeans from citizenship. Many of the Asians who subsequently arrived on American shores were not the tired, poor, huddled masses of yore but, like Kailash and the author, the best and the brightest of the middle class come to make it in the land of opportunity.

Like his narrator, Kumar came to America in the early 1990s to study in graduate school, so his immigrant’s novel is footnoted and source-cited like an academic paper. These authorial intrusions — which also include newspaper clippings, photographs, paintings, and other illustrations — upon the fictional text emphasize his immigrant’s ability to live a dual existence, to be both author and narrator, insider and outsider, actor and observer.

It’s an interesting concept, and well executed, but the novel relies too much on that tired old use of female characters whose only service is to advance the male hero’s journey. It’s yet another high-minded story about one man’s hunt for pussy cloaked in the search for love.

First, there’s Jennifer, who failed to defend her thesis and now works in the university bookstore. “She had slipped down the social ladder when she dropped out of school. It made her approachable.” Kailash is fresh off the plane, and Jennifer introduces him to the pleasures of American life, like apple-picking, ice-skating, blow jobs while watching “Saturday Night Live,” and easily obtained abortions. (In case the reader harbors sympathy for Jennifer, Kailash gets his revenge upon her in the epilogue.)

It turns out that Kailash had been flirting with Nina even while he was still with Jennifer. Then it turns out that this is a common tic of his, and that he doesn’t always stop at flirting. Guilty of the very things he suspects Nina of, his jealousy poisons the relationship. She finally leaves him.

A few weeks later, he latches onto Cai Yan, who is also a protegee of Ehsaan’s. She’s Chinese, with a perpetual “serene half smile.” A much better student than he is, she shines while he flounders. Her thesis is on peasant insurgencies in India. She goes on a fellowship to do research in India, he to China. Not star-crossed lovers but continent-crossed ones, she stops communicating with him when he inadvertently sends her a flirtatious note meant for another.

Perhaps Kumar, who name-checks Ernest Hemingway and Philip Roth, strives to write the Great American Immigrant Novel in their masculine, members-only mold. After all, he’s writing about the 1990s, when the male gaze was still very much in dominance.

Describing the different reactions that he and Cai have to an art exhibit, he notes that she wants the artist to be socially conscious, to make a political statement. “For me, the richness of the experience had been about conjuring the mundane details of a point in time. Art as an attempt to capture a mood, a feeling, which reflected what it meant to be alive in that place and time.”

But it’s not enough to merely perpetuate a mood of a certain point in time if those outdated attitudes are hurtful to half of humanity. It’s the 21st century, and many readers have moved on. Despite its inventive approach and poignant insights, the novel’s retro viewpoint fatefully mars this brave, fresh take on the immigrant’s story.