Heavy-handed symbolism aside, this YA mystery is compulsively readable. 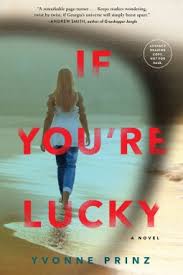 Yvonne Prinz’s new YA novel, If You’re Lucky, starts with a dive into the middle of a family’s worst day ever: a 4 a.m. phone call bearing horrible news. Their son, Lucky, is dead after a surfing accident in Australia.

(This reader wishes Lucky was not dead; this critic wishes even more that his name wasn’t Lucky. However, onto the story, a page-turning mystery with a lot of heart.)

The main character is Lucky’s younger sister, Georgia, or George to her friends, who never considered herself fortunate in life the way her brother was. She calls herself the opposite of Lucky. Her brother had an “effortless star quality,” loads of friends, and was her parents’ favorite; she doesn’t mind this at all because he was her favorite, too.

“My brother squeezed his big world into our tiny house and made everything seem more exciting, but for me it was more than that. The thing I loved about Lucky was that he made me feel normal.”

Georgia lives at home and works as a teenage pastry chef at the local bed-and-breakfast. She hopes one day to attend the prestigious Culinary Institute of America. As the novel progresses, we learn her secret and why feeling “normal" around her older brother was important: She is mentally ill, a schizophrenic — a diagnosis which would’ve better served the novel if it came earlier in the story. (There is a helpful author’s note on schizophrenia and resources available geared toward teens at the end of the book.)

One other unfortunate point is Prinz’s knack for heavy-handed symbolism. The setting, where nothing is quite what it seems, is False Bay, a hamlet on the coast of Northern California. The silver charm that Lucky always wore and that eventually winds up in Georgia’s possession has one word, in Sanskrit, on it: “Fearlessness.” We never learn if Lucky is the real name or nickname of the revered brother; the moniker screams the death knell of symbolism.

At Lucky’s funeral, which serves as a gathering of his far-flung friends, Georgia begins to question her brother’s death. The appearance of a guitar-playing drifter-surfer, Fin, heightens the mystery. Fin was apparently the first on the scene to reach Lucky, whose board was “tombstoning,” leaving Lucky, an excellent swimmer, trapped in deep water.

Georgia is drawn to Fin, who slides into Lucky’s role, charming Lucky’s mother and girlfriend, as well as her. Georgia discovers through her Internet sleuthing that his true name is Abel Sacula and that he has been withholding a lot from the townspeople of False Bay. Fin/Abel has a fatal kind of charm, the kind an adult reader instantly recognizes but which will keep most teens turning the pages to find out more.

As Georgia heeds the advice of Fin, a supposed friend, to decrease her medication, the tension heightens — what is true and what isn’t? What does she know and what is the result of her stopping her meds?

Her clueless parents are too involved in their own grieving to notice what is happening with their daughter. When she starts to hallucinate and suffer delusions — she believes that she hears her brother calling to her — no one is there except Fin.

This is the kind of novel that makes you want to yell at the teen protagonist: “Don’t do it! Don’t stop your medication! Talk to someone — don’t go it alone!” And yet Georgia’s drive to discover the truth about her brother’s death is also what makes this vivid — and sometimes disturbing — story such a compelling read.

Caroline Bock is the author of two critically acclaimed young-adult novels, Before My Eyes and LIE, both from St. Martin's Press.

An aging Irish actress recalls her gloried past performing works by her lover John Synge, avoiding the stark origins of her current penury and isolation.