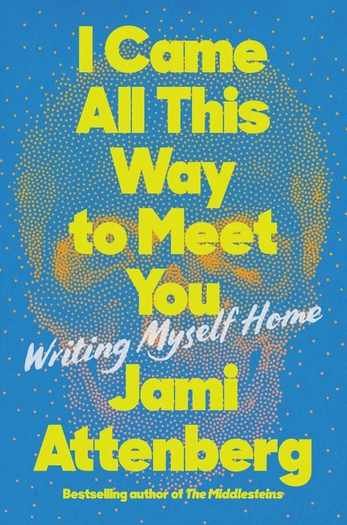 Over the course of her writing career, which includes an extended period of not much success and then, in the last 10 years, significant success, Jami Attenberg has done a lot of traveling.

In fact, she has spent so much time in airports and on airplanes — unhappy activities that often required heavy self-medication — that she titled the three sections of her memoir-in-essays, I Came All This Way to Meet You, in relation to flying: “The Long and Winding Runway,” “Brief and Dire Spasms of Turbulence,” and “A Landing, of a Kind.”

During that early, long stretch of non-success, air travel didn’t factor in. There was no money for it. Instead, for her third book, she took herself in an old station wagon on a cross-country book tour she had cobbled together. At one point, she found herself in Wyoming under whiteout conditions:

Attenberg’s memoir is touching, funny, thought-provoking, and enraging (in that we share her rage), but it also provides the valuable service of puncturing any notions about the glamour of a writing career. She never names any of her titles, but she makes it clear how an author can have three published books (in her case, a collection of stories and two novels) and still have a failed career.

Then, after her fourth book, The Middlesteins, found its audience and garnered Attenberg real attention, she embarked on a three-year period of virtual nonstop touring:

“Say yes, I thought. To everything — whether it seems like a good idea or not to be working that much, traveling that much. Because it could all be gone again tomorrow. This is your bonus round. This is your extra life.”

(In that essay, “Extra Life,” Attenberg describes teaching a writing class to North Americans in Vilnius, Lithuania, in which two male students “asked me directly if I thought they were ready to quit their jobs and devote their lives” to writing. To her credit, she didn’t laugh in their faces. I would have been tempted to say, “Absolutely! Quit your job! It’s clearly the right thing to do.”)

Having just read another memoir-in-essays of sorts, Ann Patchett’s These Precious Days, I was struck by one telling similarity between the two: both authors always thought of themselves as writers no matter what other jobs they might have been working. Being a writer was their identity irrespective of their state of success or non-success and regardless of whatever else the world might have taken them for (presuming the world ever bothered to look).

Still, much of Attenberg’s focus here is on finding her place in the world, literally as much as figuratively. Her subtitle, Writing Myself Home, is apt. Originally from outside Chicago, she describes an itinerant existence that started her junior year in college — when, while in Europe, she discovered the joys of “life without restraint” — and lasted for much of her adulthood. “I didn’t even own a bed frame until I was forty-five years old,” she notes in “Other People’s Beds.”

She’s had cheap apartments and group houses and lots of friends’ couches all up and down both coasts. She lived in three different apartments in one building in Brooklyn (before it was cool to live in Brooklyn) but often couldn’t actually afford to live there and so had to sublet and find other places to stay.

In “The Wrong Side of the River,” Attenberg writes, “Living day by day had always seemed a valid way to operate.” The reader can feel the disorientation, the exhaustion, in her bones. Touring for her books kicks that peripatetic lifestyle into overdrive.

Still, sometimes there’s no such place as far away enough. In “A Trip to the End of the World,” she is in Italy during the Brett Kavanaugh confirmation hearings. “I’m so tired of talking and thinking about the same terrible things that have happened to me over and over again. I can’t even keep track of everything that has happened to me. I would have to account for thirty years of harassment, ever since puberty.”

But hearing Christine Blasey Ford speak pushes Attenberg to recount being attacked during her freshman year in college by a young man she thought of as a friend. She writes of the incident:

“There were others, in other ways, some of them worse. But he was my friend. That’s what it was, that’s why it was hard. He was my friend and he betrayed me by being just another man.”

Predictably, the dean is more concerned with the attacker’s future prospects than with the damage to Attenberg. A year later, she attempts suicide. “They have never asked me to return and speak…If they asked me back now, I would read this chapter.”

It took her a very long time to figure out where she belonged, “to be able to put my body in the place where it needed to be.”

Today, she feels at home in otherworldly places, like the crypts and ossuaries she describes visiting in several of her essays — places to consider one’s insignificance in the grand scheme, as well as to ponder the difference between solitude and loneliness. She appreciates solitude, as most writers do, but the loneliness begins to wear.

Attenberg is an engaging storyteller in both fiction and nonfiction, and here she has readers in her corner, pulling for her to find what she’s looking for. Thus, it’s a comfort to be left knowing she has found her place — which turns out to be the surprise winner of New Orleans rather than New York — and a companion against the loneliness: a man she discovers she loves. We are happy to know she has finally written herself home.