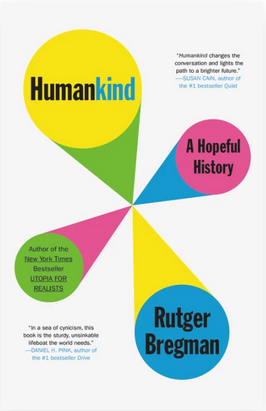 It’s hard to imagine a more appropriate time for Rutger Bregman’s Humankind: A Hopeful History to be released, here in the middle of what seems like an inflection point in American history, the long-overdue reckoning with this nation’s endemic and systemic racism.

As we watch or participate in the protests across the country — indeed, around the globe — and consider both the violence that precipitated them and the sometimes brutal government-sanctioned reaction to them, Bregman’s thesis may seem hard to swallow: that humankind is made up of humans who are inherently kind.

Bregman, the young Dutch historian and thinker who previously brought us Utopia for Realists, methodically builds his case in this overview of human history to illustrate where things started going sideways, and to interrogate the ways we can change our attitudes in order to change our outcomes.

In the ageless argument represented by Thomas Hobbes (that natural man is a brute who demands the firm hand of civilization) and Jean-Jacques Rousseau (that it is civilization itself that has ruined humanity), Bregman unsurprisingly lands on the side of Rousseau.

The author points out that though archaeology has turned up examples of large cooperative endeavors in pre-agrarian societies, such as Turkey’s 11,000-year-old Göbekli Tepe temple, it has not turned up equivalent evidence of warfare or slaughter.

The premise of Bregman’s book is that evolving into big-brained homo sapiens demanded extensive cooperation, so we’re hard-wired to be social, work in groups, and consider what’s best for the collective. He suggests our innate eagerness to please and to be liked — and, crucially, our ability to feel shame — makes us more like “homo puppy.”

Bregman realizes that lots of people disagree with his central argument. “So what is this radical idea? That most people, deep down, are pretty decent.” It took civilization — specifically, the concept of private ownership, which, in turn, required defense of property — to begin to decay that built-in urge toward cooperation.

The initial section of the book is dedicated to deconstructing the bad science and lazy reportage that has misrepresented primitive societies as being more bloodthirsty and self-destructive than modern civilized ones. Rather, predictably, the seeds of destruction of indigenous peoples are sown when outsiders bring disease and a tragically misguided superiority complex.

Case in point: On first landing in the Bahamas and realizing how peaceful and welcoming the population was, Christopher Columbus observed, “They would make fine servants…With fifty men we could subjugate them all and make them do whatever we want.” A year later, he returned to enact his plan, thereby inaugurating the Atlantic slave trade.

Another section of Humankind is dedicated to deconstructing the bad science and lazy reportage that has either initially driven or later misrepresented — or both — every sociological case study that we ever read about in school. Virtually all of those studies and experiments have been used in service of proving the “veneer” theory, which says that civilization is but a thin coating that cracks apart under the lightest pressure, revealing our brute selves.

The bad science prevails because we are all cynically quick to believe the worst in humanity, and our tendency is to glom onto and repeat endlessly every scrap of evidence to support our innate brutality. We dismiss the body of evidence demonstrating that our natural tendency is to allow our better selves to win out.

Bregman holds up a different mirror, arguing that when we expect better, we very often get better. No example is more striking than that of maximum-security Halden prison, located in a forest north of Oslo, Norway, and pre-release prison Bastøy, located on an island just up from Halden.

The guards there don’t carry weapons, but they do eat meals with the inmates. Inmates don’t live in cells, but they do grow their own food, maintain the buildings and grounds, and pursue hobbies. Recidivism is 50 percent lower than at traditional facilities, and costs are significantly lower. The objective is to prepare inmates to return to normal daily life with the skills they need so they never come back.

In the book’s closing section, “The Other Cheek,” Bregman describes in detail how Nelson Mandela averted what appeared to be inevitable civil war in South Africa. As the first election approached in which the majority-Black population would be allowed to vote, minority white Afrikaners were preparing to fight. They knew that Mandela would be elected president and assumed that Blacks would then exact revenge for the atrocities of apartheid — because, who wouldn’t?

In fact, Mandela convinced Constand Viljoen, national war hero and powerful general leading the Afrikaners’ preparations for war, to meet with him alone at his residence. That one meeting, at which Mandela greeted Viljoen at the door and served him tea, developed into four months of secret talks in which the two men grew to respect and admire each other. Together, they determined a way to prevent the war.

One of the consistent findings that Bregman points to is that, though civilization has bred into us a suspicion of people outside of our own group, our prejudices tend to fall away once we come to know those “others”:

“Contact engenders more trust, more solidarity, and more mutual kindness. It helps you see the world through other people’s eyes.”

He also notes that, “It’s when a crisis hits…that we humans become our best selves.” In the U.S., as this national moment grows into a national movement, perhaps this is when we work together to do just that.

Jennifer Bort Yacovissi’s debut novel, Up the Hill to Home, tells the story of four generations of a family in Washington, DC, from the Civil War to the Great Depression. Jenny reviews frequently for the Independent and serves on its board of directors. She also writes a bimonthly column for Late Last Night Books, and her short fiction has appeared in Gargoyle and Pen-in-Hand. Jenny is a member of PEN/America and the National Book Critics’ Circle. Previously, she served as chair of the Washington Writers Conference and as president of the Annapolis chapter of the Maryland Writers’ Association. Stop by Jenny’s website for a collection of her reviews and columns, and follow her on Twitter at @jbyacovissi.

The Rise of Andrew Jackson

The Great Guide: What David Hume Can Teach Us about Being Human and Living Well