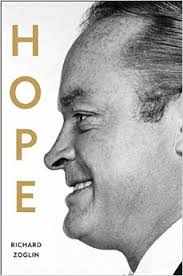 Bob Hope may be a symbol of America, but his century-long life began in England. His father, Harry, a skilled stonemason, was loving, alcoholic, and unreliable, while his mother — also kindly — teeter-tottered emotionally from the anxieties of raising seven sons and the residual grief of surviving her only daughter.

Bad financial luck propelled the family’s 1908 emigration to America. They settled with relatives in Cleveland for a time, but soon the two oldest boys had to go to work. Harry’s trade was out of fashion, but his drinking was not.

But, as Richard Zoglin’s splendid, revelatory, and raw Hope: Entertainer of the Century relates, Leslie — Hope’s given name, which he briefly changed to Lester before settling on Bob — relished attention early on and “found that performing was a way to get [it]…Leslie would hang out with his older brothers on a busy street corner, drop his trousers, and burst into tears, telling a sob story to get passersby to cheer him up with a few coins…He liked to dress up in his mother’s old clothes, shoes, and hats, delighting in the praise of neighbors.”

Later, he convoluted his ravenous predilection by diversifying into shoplifting, for which he was expelled from school, declared a “delinquent...in need of state institutional care and guardianship,” and put into a reformatory — twice.

Upon release, Hope terminated his formal education, kept the offenses secret, and, in time, had the incidents expunged. At 17, and uncertain of his career route, Hope took on myriad time-passing jobs: salesman, butcher, boxer, and dance instructor.

When dance marathons were the fashionable infatuation in the early 1920s, he hastily assembled a challenge, even though Cleveland and other cities were starting to suppress them: “Lester Hope, of 2029 E. 106th Street, started a new contest at Sojack’s Dancing Academy, but the contest was called off after an hour, due to Dance Hall Inspector Johnson’s ruling against permitting any new contests to start.”

Unvexed, Hope worked up a routine with various buddies that he performed in “rounds of amateur shows…intermission spots at movie houses, and…an occasional fill-in gig on local vaudeville bills.”

Then, in 1923, he and Lloyd “Lefty” Durbin were featured in a comedy show starring Fatty Arbuckle, a popular silent-film star who had veered to vaudeville following acquittal in the rape-murder of a starlet. The actor liked the Hope/Durbin duo, talked them up to an agent, and put them on the road with the Jolly Follies revue.

“It was Hope’s first full-time show-business job. His mother was proud; his practical brothers skeptical that he could make enough money at it. But for Hope, at age twenty-one, it was a great opportunity…The job would give him a chance to travel and see if he could make it as an entertainer in front of more than just family and hometown crowds.”

Galvanized, Hope coveted gain and greatness, which came, but only incrementally at first. During most of the 1920s, he toured steadily, except during a brief interval of unemployment and near-poverty in Chicago. Luckily, he encountered a friend who knew an agent looking for a temporary emcee at the West Englewood Theatre. Success was succeeded at the Stratford Theater, and it was there that he “became” Bob Hope.

As Hope honed his handiness as a host, he augmented his engagements with humor, for which he received favorable reinforcement and a swollen head. He dissolved his partnership of the moment, was “discovered” by a formidable agent who catapulted him to reputable venues, and finished the decade under contract to the illustrious B.F. Keith-Albee Vaudeville Exchange, with 36 weeks of guaranteed work and a weekly salary of “$475…that would slide upward to $700.”

In the meantime, the stock market crashed, and the Great Depression had begun, but Hope was virtually unaffected. He zigzagged the country, hired a new partner, Louise Troxell, and married her in 1933. The following year, the un-divorced Hope proposed to Dolores Reade.

“[Hope] had a secret, short-lived first marriage, to his former vaudeville partner, which he never publicly acknowledged. And he almost certainly fudged the date and place of his marriage to Dolores — which, since there is no record of it, some family members suspected may never have taken place at all.”

Zoglin gives over most of the book to Hope's inexorable professional ascent. “To many he seemed hopelessly shallow: a gleaming perpetual-motion machine…His manager…liked to say that every morning Bob Hope would get up, look in the mirror, and say to himself, ‘What can I do today to further my career?’”

The comedian-actor on-the-rise was absorbed by attracting better personal representation, fresh gag writers at the lowest possible prices, and jobs. Gradually and strategically, he aggregated a divine design of “branding” himself to ensure a posthumous presence.

Over seven decades, he would appear in enviable Broadway roles; emerge in 70 movies — six of which were the enormously popular “Road” films with Bing Crosby and Dorothy Lamour; and generate 20 years of radio broadcasts, along with television specials, books, newspaper columns, and 57 years’ worth of live shows for American soldiers overseas and at home.

And, just as Hope had wished, the public revered him; presidents and potentates prized him. Unfortunately for the people who should have mattered the most — Dolores and the kids — he was hardly home. “Hope was a playful, not uncaring, but distant and frequently absent father — a fleeting presence at family dinners, who would typically arrive late and dash off early, always running to appointments.”

Still, despite his lapses in judgment and sometimes overheated self-absorption, Hope was the greatest patriot in the history of show business. For that, more than any other triumph, he deserves immortality.

Where the Water Goes: Life and Death Along the Colorado River