The Truth about My Success 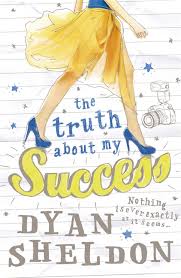 If prince-and-pauper tales — the Mark Twain type in which a humble poor kid switches places with a spoiled, rich lookalike — appeal to your teen, then The Truth about My Success, Dyan Sheldon’s winning Hollywood spin on teen starlets, is the perfect beach read.

The novel opens in a palatial house high in the Hollywood Hills of sunny Southern California, with bratty television star Paloma Rose, a.k.a. Susan Rosemary Minnick, hating the constraints of her life, especially her plotting and perfection-driven stage mother, Leone Minnick, who “snaps into the room on her Louboutins like a soldier on parade.”

While the metaphors are obvious — the house in Hollywood is called Paradise Lodge, but, of course, it’s not paradise: the day outside is “bright and cloudless, but inside a storm is raging” — there’s no pretense to the writing. Nobody is happy amid all the money and glamour. Paloma is the star of the hit series “Angel in the House,” but she’s no angel — lying, running off, and meeting up with a group of troubled teens from the other side of the hills.

In a series of movie-of-the-week plot turns, everything goes wrong for Paloma — she is arrested, her career is threatened, and her callous mother and dastardly slick agent, Jack Silk, lie to her that the show is going on hiatus and that she is being given a long, fabulous vacation.

The truth is she’s being shipped off to Old Ways, a back-to-basics teen rehab center in the middle of nowhere. Even worse, when she arrives, no one believes Susan Minnick is TV star Paloma Rose. Of course, this stay at Old Ways will be the real path to her success — as a human being.

Cut to Oona Ginness, a hardworking, thoughtful coffee-shop waitress working to save for college. The daughter of a widowed and struggling apartment super, she is everything Paloma is not — except for one thing, as the scheming Jack notices: Oona looks like Paloma.

Bribed with the promise of college money to play the role of Paloma, Oona naturally becomes a better, more cooperative, and more well-liked actress than the original. She moves into Paradise Lodge, into Paloma’s life, and in the very best and wittiest passages, shares her down-to-earth observations on the artifice of Hollywood.

“Some of them may know she isn’t really Paloma Rose … But none of them care. It doesn’t matter. What matters is the show. Nobody would care if Paloma were being impersonated by a dybbuk out to take over the whole of Los Angeles and annex it to Hell, as long as ‘Angel in the House’ isn’t cancelled and they don’t all lose their jobs.”

While so many young-adult novels are written in the first person, Sheldon takes on the challenge of a third-person perspective that alternates between Paloma and Oona in short, breezy chapters.

The narration often pulls back and offers overarching observations — a smart, distinctive voice-over to the novel. The moral of the story is a given: “It may seem strange that a girl who has so much — celebrity money, looks, adoring fans — can be unhappy, but having everything is no more a guarantee of happiness than beauty is a guarantee of love.”

For parents concerned about too much truth — sexual content, obscenities, or violence — there is none in this book, and that’s part of its appeal for younger teens (and for the aforementioned moms and dads). The Truth about My Success is a fun, frothy, and entertaining read, one teens will happily devour.

A man attempts to reclaim his identity after losing his memory in a suicide attempt.