Henry VIII and the Men Who Made Him

An exhaustive, sometimes exhausting account of the minions behind the monarch. 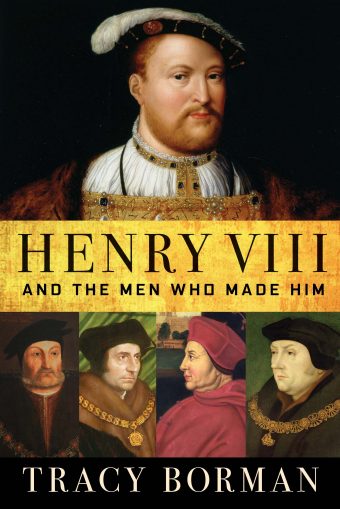 Few historical figures have been scrutinized to the extent of Henry VIII. William Shakespeare and John Fletcher immortalized him in an eponymous play. Hans Holbein, Henry’s personal artist, presented him with an opulent portrait that portrayed the monarch as a magnificent ruler. And most of us know him as the man who had not one, but two, of his six wives beheaded.

Yet we know much less about the men who served Henry, from his closest spiritual advisors to his shrewdest economic counselors. Tracy Borman’s Henry VIII and the Men Who Made Him tries to remedy that ill, with mixed results.

Borman astutely begins her story not with Henry VIII, but with his father, Henry VII, laying a solid foundation for our understanding of the younger man’s temperament and influences. The background she provides, though somewhat long-winded, does indeed lead the reader to a greater understanding of Henry VIII’s lifelong motivations and bugbears, which were many and varied.

A man plagued by insecurity about his nascent dynasty, Henry VII obsessed over his firstborn son — a trait Henry VIII would share when he had children. Unfortunately, this eldest son, Arthur, died at the age of 15, promoting Henry from “spare heir” to treasured successor; from that moment on, he was cossetted and catered to. This, too, he would experience as an adult and monarch.

Borman does an excellent job describing Henry’s upbringing, from enumerating his talented tutors to depicting his participation in lavish court celebrations. His father saw to it that the boisterous, athletic prince receive all his heart desired, including a cadre of equally boisterous, athletic friends. Many of these friends would remain with Henry across several decades in varying degrees of favor.

Regrettably, the author’s writing begins to veer off track as she chronicles Henry’s ascent to the throne. It is understandable that, as the young king grew and assumed his father’s literal and metaphorical mantle, his sphere of influence — and influencers — would also grow.

But Borman has cast her net of research so wide that it’s difficult, at least at first, to distinguish who the truly important figures were. By introducing so many minor players, she complicates the narrative.

As the book progresses, however, the reader does glean an understanding of the preeminent men attending to Henry in a range of capacities. Thereafter, the author does a competent job of both elucidating their roles in his life and chronicling their ever-evolving statuses in his court.

Early in his reign, the Tudor king had developed a reputation for being dangerously fickle, pitting his advisors against one another to ensure that none became too powerful or sure of themselves. But there were exceptions to this rule.

Cardinal Thomas Wolsey, a shrewd politician who early on thrust himself into the center of the young monarch’s court, was able to walk the fine line of Henry’s favor for a surprisingly long time. Wolsey was more than an advisor — he was a right-hand man in all matters of state and church. His fall from grace, however, was swift and complete, and he avoided answering the charge of treason laid against him only because he died before he could do so.

Similarly, Bishop Stephen Gardiner, another of Henry’s closest counselors, managed to retain his master’s trust and affection across many years of service. As changeable as the wind, Gardiner knew how to tailor his behavior to any situation. This served him in good stead throughout his life spent catering to a man as paranoid as he could be cruel. As a result, Gardiner remained in relatively good favor — with some notable dark periods — throughout his service, which ended only when Henry died.

For all her focus on the men influencing Henry, however, Borman does not neglect the women. She tells the tales of his wives, treating the reader to some intriguing and lesser-known facts about each of them.

Although they are often portrayed as ancillary details in the narrative of a great man’s life, each woman served an important yet very different function in his life. Borman’s inclusion and recognition of Henry’s wives signals both an understanding of and a respect for the roles they played.

Though at times confusing and meandering, Tracy Borman’s Henry VIII and the Men Who Made Him is a solid portrayal of a monarch who, after hundreds of years, still manages to capture and hold the imagination of generations.