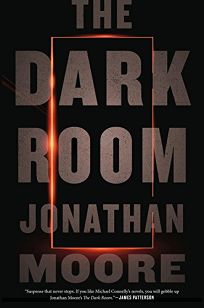 Take an author with a background as an investigator for a criminal-defense attorney, add some imagination, plus a dose of political intrigue, and you get an enjoyable read. Jonathan Moore’s latest novel, The Dark Room, revolves around 37-year-old San Francisco homicide detective Gavin Cain and his latest case to chase down a blackmailer.

We meet Inspector Cain at a gravesite in the middle of the night, where a body is being exhumed. Before we can find out more, Cain is called away on another urgent case, dramatically leaving in a police helicopter. Shortly thereafter, he is in the office of the mayor of San Francisco, Harry Castelli, looking at salacious photos of the mayor with a stunning blonde. There’s an accompanying blackmail note suggesting His Honor kill himself before more pictures become public.

The exhumation plays a prominent role in ratcheting up the suspense and complicates the mystery of who is blackmailing Castelli. But of what, if anything, is Castelli guilty? What do his alcoholic wife and spoiled daughter know? And is his uber-efficient assistant, Melissa Montgomery, involved?

Castelli’s promising political career clearly hangs in the balance, but a failing of this story is that character development is weak. It’s hard to feel anything — either compassion or disdain — for the mayor. We don’t know enough about him other than that he likes to drink and is somewhat vain (his gray stubble contrasted with his black hair suggests a dye job to Cain) to form an opinion. We know nothing of his motivation to be in public service, or of his accomplishments, or even of his failings, to make us root for or against him.

Cain’s character, while less of an unknown than Castelli, is similarly one-dimensional. We know he’s good at what he does, that he is unmarried and without children, and has an agoraphobic girlfriend. His girlfriend, in fact, is the more interesting of the pair. As her story slowly unfolds, we learn the reason for her reluctance to leave her house. We also learn about her talent and strength.

A woman FBI agent gets added to the team and is better fleshed-out as Cain’s equal in professionalism and savvy. To round out the investigators, Cain also gets a new partner, Buddy Grassley, and an additional San Francisco Police Department detective, Angela Chun. Cain’s two SFPD partners are not fully developed, for reasons I will not go into here for fear of spoilers, and that’s regrettable, because they are engaging. Take, for example, this exchange between Cain and Grassley:

Cain: “And then [Castelli] had to go look for his first honest job.”

Cain: “You can hear that, even over the phone?”

Grassley: “I didn’t hear anything, sir.”

This is a nice bit of dialogue, snappy and revealing of Grassley’s loyalty and smarts.

If you’re a San Francisco fan, your interest may be heightened by the setting. References to the city's iconic sights — the Presidio, the bay, the famous bridge — are sprinkled throughout the well-written and quickly paced book as Cain follows the trail of evidence from city hall, to the Castelli cliff-side home, to the morgue, to a local cop hangout, with brief stops at his girlfriend’s house.

Moore’s novel is a garden-variety thriller. The pivotal plot point is not new, having been used numerous times in many variations, from Ellery Queen stories to “CSI.” There are no deep motives, no political messages, no new insights into the criminal mind or the particulars of investigative work.

As light entertainment, however, The Dark Room is a success. It has blood and gore that would require an R rating in a movie version, and the clue-laced plot is complicated by sufficient misdirection and twists to keep you guessing until the end. All the narrative threads are not neatly sewn up, leaving a couple of loose ends that, if not intentional, are at least interesting book-club conversation points.

The Dark Room is the second of Moore’s planned three novels about San Francisco. The first was The Poison Artist, published in 2016, and the final is The Night Market, set to be released in 2018. He has also written Close Reach and Redheads, the latter of which was nominated for a Bram Stoker Award. When not writing fiction, Moore practices law in Honolulu.

If you prefer your reading to be more substantial, to educate as well as entertain, your time will be better spent elsewhere. But if you’re looking for fast, fun read, The Dark Room may be just your cup of mayhem.