City of Angels: or, The Overcoat of Dr. Freud

An examination of memory’s selectivity and time’s multi-dimensionality. 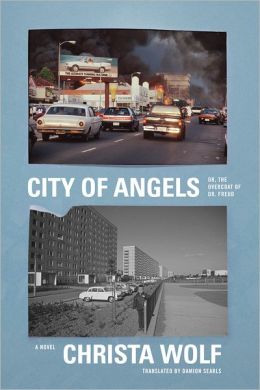 Christa Wolf, a literary star of the former German Democratic Republic who also enjoyed a wide and appreciative readership in West Germany, became caught in the maelstrom of German reunification when formerly secret files disclosed she had collaborated with the hated Stasi. Denounced by the same countrymen who once had lauded her, and longing for a country no longer found on the geopolitical map, she examines the pull of ideologies, the weight of individual culpability and the fickle nature of memory in this fascinating autobiographical novel.

The story takes place in 1992, when the unnamed narrator arrives at a center for scholars just outside of Los Angeles. There she hopes to solve the riddle of a packet of letters bequeathed to her by her friend Emma, who had been enormously influential in the narrator’s youthful embrace of communism. The letters, all signed with the single initial L., are from Emma’s girlhood chum, who had fled to California just as the Nazi noose tightened. However, when the narrator’s own secret past comes to light, and the newspaper articles denouncing her mount day by day, the mystery of Emma’s letters becomes secondary to her search into her own past.

Wolf captures wonderfully the atmosphere of collegiality and the provisional community typical of scholars at such centers. Her Swiss, German, Italian and African-American intellectuals are not well differentiated from one another, but they make for great company while they tour daring art installations and sample each others’ Chinese food. They also present the narrator with a variety of alternatives for dealing with her predicament: an adherent of a failed ideology and citizen of a nonexistent country. Over time, however, a resident who holds himself slightly apart from the others becomes her de fault confessor. When the narrator pesters Peter Gutman once again about whatever prompted her to collaborate and why she can’t remember doing so, he gives her the one answer that frees her from her obsessive self-recrimination. “All right, listen,” he tells her, “It’s really very simple. You wanted to be loved. You wanted the authorities to love you too.”

Behind the narrator’s own problems lurks the Holocaust. Its imprint is everywhere: on the plaques of houses marking distinguished German émigrés who had fled the Nazis, and among the members of the “second generation.” At a party with an international crowd of Russians, Hungarians, Poles and Americans, the narrator realizes she’s the only non-Jew. First the guests ask her asked about reunification — a question for which she has no answer. But then, almost immediately, the conversation veers to the evening’s true topic: Who was responsible for Nazism, the rabble or the elites. And the narrator realizes, “Time has stood still for decades for these people. Nothing was in the past for them, nothing had been eased, no pain had lessened, no disappointment had faded, no anger had blown over … For the first time, I experienced the need refugees have to share, with a German, their never-ending bewilderment. I stopped trying to defend myself against it and accepted it.”

In this character, Wolf has given us a splendid depiction of a middle-aged woman, one who may pine for a failed political system and a lost country, but not for her lost youth. Keenly observant and droll, she’s fine with being frayed around the edges by life. Infinitely curious, moderately adventuresome and nonjudgmental when it comes to the foibles of others, she enjoys a margarita or two, watching “Star Trek” and sitting on a seaside bench to see the sun set. And we easily believe she’s got the spunk to say yes when invited to visit the American Southwest, “a journey to the other side of reality,” where “the feeling of going outside of time grew stronger and stronger.” And where she meets members of the Hopi tribe, a people whose language has no words for “time” and “space” and who, she realizes, live unfettered by either of those artificial constructs.

Unfortunately, other sights — the Hearst Castle, the museum at the Los Alamos research facility where the atomic bomb was developed and Las Vegas — get short shrift despite their latent symbolic possibilities. Similarly, the narrator’s supposed guardian angel is not quite convincing. Wolf’s narrator is too level-headed to accept such a creature, and the angel is not written with enough authority for this reviewer to accept her either. And finally, the answer to the puzzle of L’s mysterious letters is contrived. That said, City of Angels: or, The Overcoat of Dr. Freud, remains a fearless examination of memory’s selectivity and time’s multidimensionality.

Damion Searles, who translated from the German, deserves much credit for this book’s success. Again and again, the German narrator bumps into the problem of language: the impossibility of finding a word having the exact meaning in one language that it has in another, and the resultant loss of understanding. By leaving some words in German and then having the narrator state there’s no corresponding meaning in English, Searles captures her frustration.

Given the looping nature time in this book — it’s told from the present, but set in the early 1990s and examines the early postwar period — one can appreciate the challenges Searle faced in shifting tenses while managing to keep the narrator’s consistent and vibrant voice. Wolf, who died in 2011, created her narrator’s wry, reflective tone. Searles lets us hear it in English. This reviewer is grateful to both of them.

Patricia Schultheis has had several essays and nearly two dozen short stories published in national and international literary journals. Her pictorial local history Baltimore’s Lexington Market was published by Arcadia Publishing of South Carolina in 2007, and her collection of short stories about a fictional street in Baltimore named St. Bart’s Way was a finalist for the 2008 Flannery O’Connor Award and Snake Nation Press awards. She is a voting member of the National Book Critics Circle.