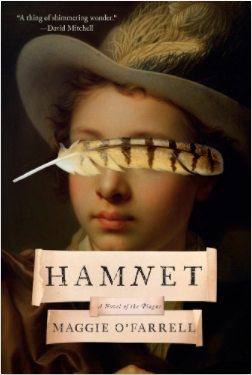 If Maggie O’Farrell’s Hamnet (shortlisted for the 2020 Women’s Prize in fiction) were simply a captivating love story about a “falconer girl” and a “Latin tutor,” it would be compelling enough to hold a reader’s attention. However, when the tutor turns out to be William Shakespeare and the girl his wife (here known not as Anne, but Agnes), it becomes a brilliant historical novel steeped in the heady atmosphere of the 16th century.

With the little that is known about the playwright’s personal life and the even less that is known about his only son, O’Farrell has taken what she calls “idle speculation” and “scant historical facts” and transformed them into a spectacular narrative. She reconstructs the life and times of the Bard of Avon, his wife, and his children. And she makes the story her own.

Hamnet opens with a boy “coming down a flight of stairs…He takes each step slowly, sliding himself along the wall, his boots meeting each tread with a thud.” As he reaches the bottom, he pauses a moment, “looking back the way he has come. Then, suddenly resolute, he leaps the final three stairs…He stumbles as he lands, falling to his knees on the flagstone floor.”

He is greeted by an unexpected, unusual silence. It is a profound quiet that dominates his short life and provides the emotional center to the entire exceptional novel. With a foregone sense of foreboding, it is not a spoiler to reveal that this 11-year-old boy never becomes a man.

But this is not just a book about Hamnet’s death. It is also a startling revelation about the crippling effects of grief and the arcane sources of creativity. It is about the mystery and magnificence of the family bond. Not just any family — the family Shakespeare.

In the disconcerting stillness, Hamnet is searching for someone, anyone to help him with his “unwell” twin sister, Judith. No one seems to be around. Not his grandparents next door; not his older sister, Susanna; and, most importantly, not his mother. His famous father is “miles and hours and days away, in London, where the boy has never been.” There is only the “indefinable noise of a house at rest, empty.” He is disconsolate, “utterly confounded to be so alone.” He lurches about, wondering, “where is everyone?”

Eventually, after rambling through the village, he stops at the physician’s house, where he discloses that Judith has a fever, along with “buboes [and] lumps. Under the skin. On her neck, under her arms.” He returns home, unwilling to name her illness: “He will not name it, he will not allow the word to form, even inside his head.”

It is, of course, the plague, one that has shuttered all the playhouses in London “by order of the Queen, and no one is allowed to gather in public.” The great misfortune may be the family’s good fortune. It means his father may be able to return home for months.

O’Farrell gives vivid dimension to the story by flashing back to the time William and Agnes met. Eighteen-year-old Will is paying down his father’s debt to a yeoman who owns acreage in Hewlands by teaching Latin grammar to the farmer’s sons. Even there, his creative mind wanders. From a window, he watches trees:

“lined up as they are, fringing the edge of the farm, bring[ing] to his mind the backdrop of a theatre, the kind of painted trickery that is unrolled, quickly, into place to let the audience know they are now in a sylvan setting…on wooded, uncultivated, perhaps unstable ground.”

He also notices what he at first thinks is a young man “wearing a cap, a leather jerkin, gauntlets…[with] some kind of bird on his outstretched fist.” He is instantly drawn to the falconer, but then discovers it is the farmer’s eldest daughter. Thinking of her, of “her braid, her hawk,” lightens his “indentured” visits. She, too, is immediately taken with him.

What he doesn’t know is that she has a reputation for being “strange, touched, peculiar, perhaps mad.” She is known to carry a bag of “curses and cures.” In fact, she has psychic powers, “fascinated by the hands of others.” She finds the “muscle between thumb and forefinger…irresistible.”

When she takes hold of Will’s skin, an “oddly intimate” gesture, she senses greatness. He has a future that is “far-reaching [with] layers and strata, like a landscape…too big, too complex…more than she could grasp…bigger than both of them.” He is enamored of her because he thinks she “see[s] the world as no one else does.” Her paranormal skills match his imagination.

There are several memorable set pieces in the novel. The first, in 1583, is the couple’s initial lovemaking, a breathtaking scene set in an apple-storage area of the farm. Visually and aurally stimulating, it is vigorous enough to make a “tapping, rhythmic, rocking sound,” enough to “rotate and jostle [apples] in their grooves.”

The result is their firstborn, Susanna, who arrives in a captivating labor sequence in a forest where the “branches are so dense you cannot feel the rain.” It is there Agnes foresees that Will and she will have “two children and they will live long lives.” When she later bears twins, she is unsettled by what the earlier premonition must mean.

What no one knows is that, in 1596, there is a pestilence making its way from Alexandria, Egypt, via fleas, a monkey, cats, rats, and a cabin boy to infected rags wrapped around a glass necklace from Murano, Italy. The trail of disease ends in England when young Judith receives the millefiori beads. The heart-stopping description of the journey is one of O’Farrell’s most astounding narrative sequences.

Another remarkable one is the death of Hamnet at the end of the first part of the novel. Judith has been spared, but in an alarming, disconcerting way. A “great soundlessness” descends into the room where Hamnet lies. The hush that opened the book returns. There is only “silence, stillness. Nothing more.”

But O’Farrell is not quite finished with the boy, his mother, his father, or history (living and literary). The boy may be gone, but he is not forgotten. His memory lives on in the play that becomes Hamlet.

As the epigraph to the second part of the novel, O’Farrell quotes the prince’s dying words to Horatio: “I am dead:/Thou livest…draw thy breath in pain,/To tell my story.” She then explores the possibility that Agnes made her way to London and saw her husband appear at the Globe as Hamlet’s father’s ghost.

This closing sequence is the ultimate, gut-wrenching scene. Agnes realizes the emotional toll their child’s death has taken on Shakespeare. It has been four years. She has “looked for [him] everywhere, ceaselessly…and here he is.”

“[Her] Hamnet is dead…yet [this Hamlet] is him, grown into a near-man, as he would be now, had he lived, on the stage, walking with her son’s gait, talking in her son’s voice, speaking words written for him by her son’s father.” Her husband has “pulled off a manner of alchemy.”

Ghosts of all kinds prevail. They populate the stage; they embrace everyone’s thoughts. The Hamlet on the boards is “two people…both alive and dead.” A “final silence” descends at the end of the play, after “the dead have sprung up to take their places in the line of players at the edge of the stage.”

What O’Farrell has done is incredible. She has memorialized a family. The novel is the thing in which she catches the conscience of the reader. This is the kind of dazzling novel to put in everyone’s hands, to tell everyone to read. It is a flawless achievement. Every sentence is silk; every detail vibrant; every character pulsates.

In the overwhelming, heartbreaking conclusion of Hamnet, the author collects all the silences, all the sufferings, all the ghosts into a compelling resolution to tell the Shakespearean story. She breathes life into the boy who fell down the stairs.