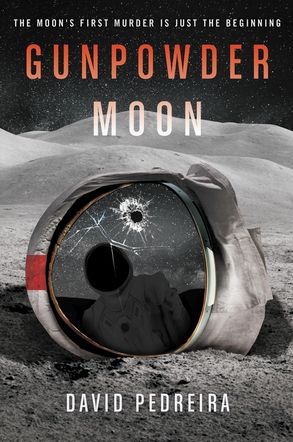 When a book mixes genre, must it follow all the rules and corresponding tropes to succeed?  David Pedreira’s debut novel, Gunpowder Moon, is a science fiction/mystery/thriller. The story’s tagline — “The moon’s first murder is just the beginning” — tries to encapsulate all of the above: The book is set on the moon (science fiction), it’s about a murder (mystery), and the killing sets off a chain of events with dire consequences (thriller).

Pulling off any one of these genres is challenging, but mastering all three requires a level of mastery that might be overly ambitious for a first-time novelist.

It is 2072. The United States, along with several other countries (most notably China), has established permanent mining stations on the moon, extracting helium-3, a nonradioactive isotope that is used in generating fusion power.

The smallest and most remote of the American mining operations is Sea of Serenity 1, commanded by Caden Dechert, an ex-military officer who went to the moon to get as far from conflict as possible. But conflict finds him when one of his miners is murdered.

The American Space Mining Administration is quick to blame the Chinese. The two countries “had been bickering about mineral rights for months,” and both are leaning toward war to settle the dispute. Dechert, however, feels there is no evidence to support Chinese involvement. As business, political, and military interests close in, he seeks to stave off the war by getting to the bottom of the murder.

Throughout, Pedreira offers a convincing experience of inhabiting the moon: the constant dust that requires filters and blowers and “clean” rooms, and the danger of radiation that requires the base to be buried below ground for extra shielding. There’s also the requirement that everyone wear 1-g suits when inside to approximate Earth’s gravity, so their bodies don’t atrophy.

Pedreira’s attention to small details, such as using LPS (lunar positioning system) instead of GPS, and consideration of logical outcomes of human habitation — “We’ve increased the Moon’s atmosphere by seven hundred percent since we’ve been here, just through the gas emissions of our stations and propellant-driven craft” — makes the reader believe these people really live on the moon. This is hard-science fiction at its best, believable because the facts are accurate.

The events happening on Dechert’s base are equally convincing as the government deliberately sets the grounds for war. Evidence is moved to another base, taking it out of Dechert’s reach. A representative from the Space Mining Administration arrives the day after the murder — a reporter in tow — and announces that the marines will be arriving shortly.

Dechert, who has PTSD from his time in the military, feels the mounting pressure of a situation he can’t control and worries that more lives will be lost. The march of these outside forces serves to heighten the tension — especially when people do start to die — in the way of all good thrillers.

But what of the mystery? It might appear that a murder set on a lunar base could function like a Clue-style whodunit, but in those types of house-party stories, the participants don’t know each other, so everyone suspects everyone else.

In a remote lunar base that houses only six people, it is much harder to arouse feelings of suspicion. This is further hampered by the fact that moving from one room to another on the moon requires preparation and communication, and that every movement is recorded by the computer systems.

How do you make a compelling mystery when there is so little room for subterfuge and discovery? With such tight quarters, the only solution is to have the murderer off screen for most of the book, which all too clearly points to his identity. And with the war gathering momentum, finding the guilty party becomes less important anyway.

Pedreira, as a former journalist, writes clean, clear sentences and the occasional brilliant metaphor: “The mining field [lights] radiated out in a giant circle like a pushed-over Ferris wheel on the dark center of the Moon.”

He is less adept, however, at character development and readily defaults to caricatures: the boy-genius hacker, the tomboy, the stuffy bureaucrat, the military man who’s just following orders.

Even Dechert, the most rounded of them all, is a bit one-note; we are told again and again that he lost a lot of soldiers when he was in command, and now his one purpose is to keep his mining crew — his surrogate family — alive.

It is inevitable that Gunpowder Moon will be compared to Andy Weir’s Artemis, which also relates a thriller/mystery in a lunar settlement. The books, however, navigate two very different moments in human lunar history. Weir’s moon is already home to a city, which allows for a large cast of characters with a much greater freedom of movement. Gunpowder Moon, with its more restrictive settlement, provides a world that seems, at only 54 years in the future, much more plausible.

In the end, Gunpowder Moon succeeds as a hard-science fiction, military parable. The thrill of living on the moon is tangible, and as the plot kicks in, it becomes hard to put the book down. As a mystery, however, it is less successful, and that, unfortunately, detracts from the overall satisfaction.

Ariel S. Winter was a finalist for the Los Angeles Times Book Prize, the Shamus Award, and the Macavity Award for his novel The Twenty-Year Death. He is also author of the novel Barren Cove and the children’s picture book One of a Kind, illustrated by David Hitch. He lives in Baltimore.