Going into Town: A Love Letter to New York

The cartoonist serves as a happy, helpful tour guide through her favorite place on earth. 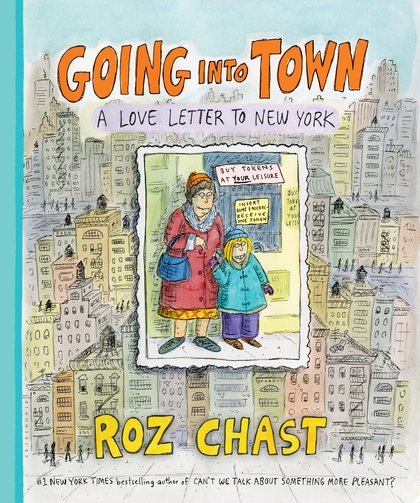 You don’t need to read the New Yorker to instantly recognize a Roz Chast cartoon: Her lumpy, myopic Everymen and Women with perpetually bad hair always look as though they are vibrating into dust from the general angst of daily life. Her humor isn’t terribly edgy, but rather sharply observant of the quotidian, perfectly capturing the idiocy and indignities we all suffer.

In her latest book, Going into Town: A Love Letter to New York, we see a rare side of Chast as she shares her sense of joy about the place in the world she loves the most: Manhattan. The book started out as “a small booklet I made for my daughter before she left her home in Suburbia to attend college in Manhattan,” the place where Chast had spent her first years as an adult and always felt the most at home.

“Or maybe, that it’s the place where I least feel that I don’t fit in.”

Perhaps what’s most surprising about Town is how well it would actually serve as a guidebook. It offers basic, concrete information about how Manhattan is laid out, how to use the various forms of transportation, and how to puzzle through getting from where you are to where you need to be — all without a hint of condescension. (“A term you’re going to hear a lot is CROSS-STREET.”) Her primer on the various subway lines is reason enough to use this as your go-to reference.

She shares which parks and museums top her list of places to visit, and her reasons why Grand Central Terminal is her favorite building in the city. This is the book that any loving mother who’s also a world-famous cartoonist would sketch by hand for her college-age daughter heading into unfamiliar territory. I, as a hopeless rube from DC suburbia who’s spent a cumulative total of perhaps six days in Manhattan, plan to bring a few of Chast’s pages with me the next time I venture into the Big City.

As a bonus, this love letter also gives us a bit of insight into the formation of Chast’s talents as that sharp-eyed observer. She confirms what we have suspected all along, that she is a hopeless people-watcher, a voyeur:

“I like to watch and eavesdrop on people…I like to look at people, but in the sly, indirect way that people look at other people in the city.”

Her preferred mode of transportation is walking, because of all that is out there to be discovered: “There’s SO MUCH MATERIAL…If you’re feeling antsy or out of sorts, pick a street and walk across it from coast to coast. Any street will do. (Wear comfortable shoes.) The more nondescript your street is, the greater chance you have of making your own discoveries.”

As a random example of the sorts of discoveries you can make if only you open your eyes, she offers up a wild selection of standpipes. These are included as a series of photographs so we won’t think she is making them up. Of a blinged-out gold-and-red assembly that absolutely resembles the torso of an S&M-favoring stripper, she says, “This one goes by the name of ‘Trixxxi’.”

It’s also somewhat of a healing relief to accompany Chast on this journey in which she shows off the geography that brings her joy, especially for those who were with her through her much-lauded but harrowing memoir of 2014, Can’t We Talk About Something More Pleasant? There, she offered not only an unflinching account of her parents’ decline through advanced old age into death, but also of her isolated childhood and painfully fraught relationship with her mother.

In Town, George and Elizabeth Chast take minor and benign roles as the middle-aged, mildly bickering parents who only rarely and reluctantly take the subway trip from Brooklyn “into town” to see a play and then immediately return home, brooking no exploration.

Still, the central illustration on the front cover is Chast’s interpretation of a photo taken of her and her mother when little Rosalind was perhaps 4 or 5. (The photo itself is on the last page of the book.) The sketch shows a smiling mother and daughter holding hands in front of a subway-token booth, dressed and ready for an adventure, going into town.

Jennifer Bort Yacovissi’s debut novel, Up the Hill to Home, tells the story of four generations of a family in Washington, DC, from the Civil War to the Great Depression. Jenny is a member of PEN/America and the National Book Critics’ Circle, and writes a monthly column and regular reviews for the Independent. She is chair of the 2018 Washington Writers Conference, and is president of the Annapolis chapter of the Maryland Writers’ Association.