Gods of Howl Mountain: A Novel 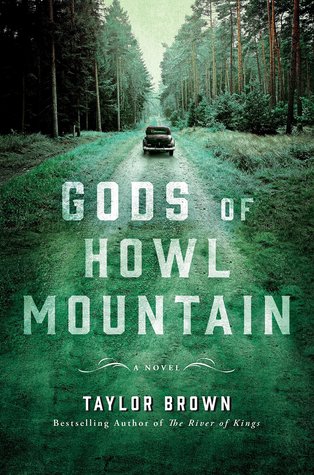 The author photo on Taylor Brown’s website appears yellowed and frayed around the edges, as if treated with an “Old West” Instagram filter. In fact, the shot is the real McCoy, an authentic tintype taken with a 19th-century camera and imprinted on a thin metal plate. In Brown’s third novel, Gods of Howl Mountain, he shows a similar reverence for authenticity, packing his pages full of regional aphorisms and period-specific detail.

Set in the rugged mountains of western North Carolina in the early 1950s, the story opens with 22-year-old Rory Docherty, a wounded veteran of the Korean War, embarking on his new career as a moonshine runner for fearsome kingpin Eustace Uptree.

Watching over Rory is Granny May, his foul-mouthed, herb-smoking, fiercely independent grandmother. Her mountain witch remedies put her in a place of wary reverence according to the upstanding population of nearby valley town Gumtree.

Rory is aimless, having “come home with war in his blood.” He struggles with his new wooden leg, a handicap that limits his employment options, but has managed to train himself to drive Maybelline, a souped-up 1940 Ford coupe fitted with an ambulance engine, along the tangled maze of dirt roads and side paths that creep up the mountain like kudzu. Stoking his smoldering anger is the matter of his mother, confined to a mental hospital since the unsolved attack that left her mute and her paramour — Rory’s father — dead.

Brown’s prose is vivid and full of imagery. The characters and settings are rendered with mesmerizing detail:

“They were pale and soft-looking, with sickly creases underneath their eyes, like they lived underground. To hear it told, they lived on Double-Cola and Goody’s Headache Powder from the dope wagons, wheeled pushcarts that circulated the mill, peddling sugary cakes and sodas and tonics. Tonight they had other remedies: jars of white whiskey secreted between their knees, their faces jolly-red in the October dark.”

But with so much to set up — there are also rival bootleggers, corrupt local sheriffs, federal revenuers, and a sect of Pentecostal snake-handlers (ministered to by a pastor with the on-the-nose surname of Adderholt) — the plot is slow to develop. There are plenty of events, but they often feel anecdotal or, as in the case of an early scene where Rory hitches a ride with a truck-driving aesthete, extraneous.

The problem becomes exacerbated by the abundance of florid prose, leaving readers impatient for the story to take shape:

“This was the best time of year for root-hunting, digging up the raw ingredients for the medicines she made. The teas and tinctures, potions and poultices. In the summer, the plants spent their energy producing leaves and flowers and fruits. In the fall, they drove their nutrients down into the earth, anchoring themselves to survive the hard winter months. When she moved through the forest, she was surrounded by friends. Neighbors. She knew more than their names. She knew the shapes of their leaves, like tiny pennants or knives or hearts, and the size of their bulbs and berries and fruits.”

Too often, Brown indulges this sort of overwritten passage, and they recur throughout the novel. Sentences describing roads like winding streams running down the mountains, exhaust pipes snaking beneath undercarriages, or oblique references to the mysterious herbs Granny May packs in her pipe begin to feel repetitive and tedious upon the second or third encounter.

Similarly, symbolic gestures are occasionally given more weight in the plot than narrative causality. Picking up a rattlesnake is somehow treated as a climactic act of vengeance, and showing up to compete in a race is offered as a solution to a blood feud, regardless of the victor.

The progression of events is familiar enough that would-be plot twists are met with a shrug. While the lofty prose manages to elevate the literary bona-fides of the writing, that same energy isn’t matched by the plot.

Fortunately, the main characters deftly transcend their archetypes. Granny May is easily the novel’s breakout figure, far more vivacious at 54 years of age than the “Beverly Hillbillies” matriarch her moniker might lead one to picture. Eustace Uptree is a menacing presence, yet fiercely protective of his people, Rory included. Deep family bonds lay critical foundations for the philosophies of everyone.

Brown’s clear enthusiasm for the historical folklore of post-war North Carolina is infectious. NASCAR’s early ties to the bootlegging industry are well known among racing aficionados, but even people immune to the allure of watching good ol’ boys drive in circles might be swept up in the breathless excitement of Rory’s first race. And to Brown’s credit, the disparate elements of the story manage to converge at the end in satisfying fashion.

There is so much authenticity and craft on display in these pages, but those elements aren’t quite enough to rely on. There is an old revision adage regarding the difficulty of cutting out language that shines on its own but fails to serve the overall story. It advises the writer to “murder your darlings.” Perhaps a more ruthless editor could have shaped this enjoyable novel into a truly great one.

Steve Trumpeter is a writer whose fiction has appeared in Sycamore Review, Salamander, American Fiction, Hobart, Chicago Quarterly Review, and other publications. He teaches fiction writing at StoryStudio Chicago and hosts Fictlicious, a popular live lit and music show in Chicago.