A stirring account of the nation's first commander-in-chief and his attempt to understand (and unite) the American people. 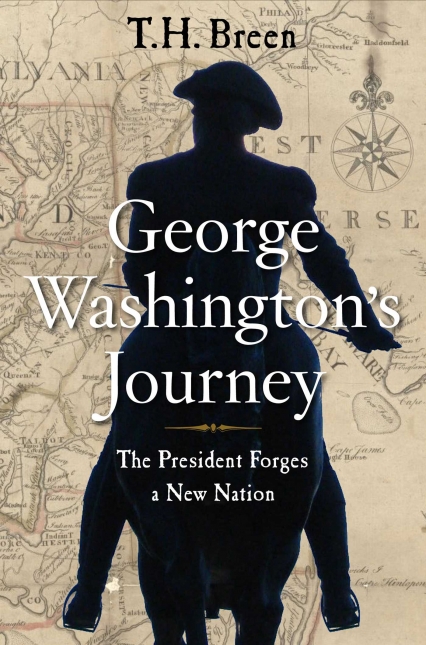 Americans who have scoffed at the cliché phrase “George Washington slept here” might reconsider after reading historian T.H. Breen’s account of Washington’s tour of the new United States during his first term in office.

Clear and vivid, Breen’s writing demonstrates Washington’s great gift for political theater while at the same time assessing the nation he had been selected to lead.

Putting aside several minor errors with regard to the War for Independence, readers will take great delight in seeing a side of the first president heretofore not told in book-length format.

In his gut, Washington knew that he was the personal embodiment of the American Revolution. Even though the Constitution had been ratified, and Washington was elected unanimously as the first chief magistrate, the new president was keenly aware that the fledgling republic was fragmented along geographic, social, and economic lines. To his great credit, Washington wanted to put his finger on the pulse of the American people. And the only way to do that in the 1790s was to go out and meet them.

In Breen’s deft hands, readers will encounter a very personal George Washington, as well as a shrewd politician. Washington had one purpose in mind for his trip: to unite the United States. His journey to the 13 original states was a one-man show designed to demonstrate the unity of the nation. The president sought to embody the ideals born from the victory of America over Great Britain, and in doing so, he hoped the people would rally to his side.

Whether it was in New England, the Mid-Atlantic, or the South, throngs of ordinary people gathered to see the great man make his way. “Washington’s tours provided a catalyst for a shared realization that the Revolution had in fact succeeded. It produced a new society.”

The American people were aware they were making history, and they understood a new social order had been created. The sheer numbers who cheered Washington on his travels attest to the fact that they, too, wanted to be players in this new act of history.

Breen skillfully demonstrates how women of the age wanted to take part in the new nation, even if it was still a male-dominated society: “Their presence at the parades, the receptions, the balls, the dinners, and the tea parties reminds us how women could be political in an age before suffrage.”

What makes Breen’s account so compelling is the depth of the research he did to uncover the details of Washington’s travels. He cites many newspapers that kept on top of the president’s every move, particularly when he was in their locale. He even mined Washington’s diary.

In his travels, the president was confronted with the issue of slavery. To this end, Breen devotes a portion near the end of the book to Washington as a slave owner. For the men who established the nation, the best that they could hope for was that the problem would just go away, but it did not. It remained and festered until it was resolved by the Civil War three generations later.

Unlike other historians of the founding era, Breen holds nothing back on his criticism of Washington as a slave owner. “The slaveholders of the early republic,” Breen argues, “knew that slavery was wrong, but they lacked the moral courage to reform a labor system that profited a small group in society at the expense of so many black workers who fully understood the benefits of freedom.”

To avoid the dictates of Pennsylvania law, which permitted enslaved persons to be free after a six-month period of stay in Philadelphia, Washington skirted the law by rotating his enslaved population to and from Virginia every six months. His slaves were well aware of the game that was being played. The sordid tale of Washington’s enslaved cook, Hercules, and his decision to take flight under Pennsylvania law while the nation’s capital was located there, illustrates the depth of the problem.

George Washington’s Journey is an important contribution to the history of the early American republic. For readers who enjoy studying this period of American history, it will make a thoughtful addition to their bookshelves.

James A. Percoco is Teacher-in-Residence for the Civil War Trust and the Journey Through Hallowed Ground Partnership, author of Summers with Lincoln: Looking for the Man in the Monuments (Fordham), and a member of the National Teachers Hall of Fame.