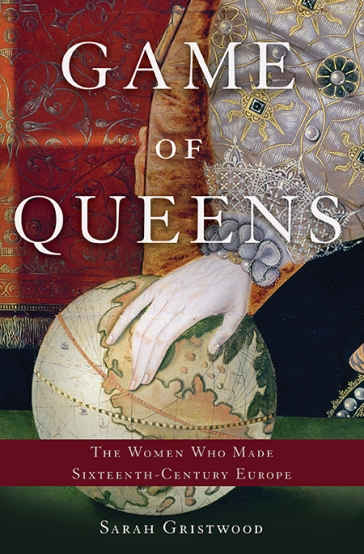 In Game of Queens, historian Sarah Gristwood examines the roles female rulers played in shaping early modern Europe. The book serves up a long-overdue perspective on this pivotal era, beginning, roughly, with the reign of Isabella in Spain (remember Columbus?) and ending with the death of England’s Elizabeth I in 1603.

The era was marked by incessant struggles for dominance via diplomatic alliances between nations, many of which were anchored in royal marriages and betrothals. What’s more, these marital maneuvers unfolded against the contentious backdrop of the Reformation. Many of them were dynastic gambits, countermoves, or feints supporting one or the other side in Catholic vs. Protestant conflicts in the royal courts themselves, in the centers of learning, and at street level.

In the years before 1500, admittedly, it was business-as-usual to dangle princesses and royal cousins as dynastic marriage bait, and royal women have held and/or contended for power both before and after the period Game of Queens covers. Still, as its author ably illustrates, the 16th century saw a surge in powerful women doing things of international import.

This surge is distinctive for its geographic reach — extending from Spain, England, and Scotland on the western edge to Austria and Hungary in the east — as well as for the long-lasting political impact its female avatars engendered. And this “gynocracy” is a remarkable development for another reason, too, given what was arguably the dominant conception of a woman’s role in civil society and, more to the point, in the native capacity of women to rule.

Consider Protestant reformer John Knox, who declares (in First Blast of the Trumpet Against the Monstrous Regiment of Women in 1558) that a woman in power is “a thing most repugnant to nature [when] women rule and govern over men.” Knox also compares crowning a woman to putting “a saddle on the back of an unruly cow.” (Like many of his contemporary religious controversialists, Knox never met a scurrilous barnyard insult he didn’t like.)

For Anglo-centric readers, the saga of 16th-century women rulers in England and Scotland may already be familiar, thanks to the popular histories and biographies of authors Alison Weir, Tracy Borman, and Anne Somerset, among many others. Gristwood retells this part of the story with a good deal of wit and charm.

We find Spanish-born Queen Katherine of Aragon, well before Henry VIII set her aside, serving as regent of the kingdom in 1513 while Henry is off pursuing his wars across the channel, and even quelling an opportunistic Scots invasion in Henry’s absence. Three decades later, we find Henry’s sixth and final queen, Katherine Parr, also as regent and in similar circumstances to those of Katherine of Aragon (although the image of lame, bloated, 300-pound Henry armored up and leading a war charge threatens to beggar the imagination).

In England, female leadership occasioned some turmoil and bloodshed, though nothing particularly remarkable for its time. The century had barely begun when Margaret Tudor, elder sister of the future Henry VIII, was married off to the king of Scotland. Margaret’s effective rule up north proved to be a precarious on-and-off affair. Later, in the years after 1560, Margaret’s granddaughter Mary Queen of Scots was to bedevil her cousin Queen Elizabeth as a potential challenger for the English throne, as her supporters kindled putative rebellions every few years.

Elizabeth, the Virgin Queen, after much vacillation, put a stop to this when she had Mary executed in 1587. As Gristwood reminds us, there’s also Elizabeth’s predecessor, Queen Mary I, daughter of King Henry and Katherine of Aragon, who, for a time in the 1550s, restored England to the papist fold, burning 500-600 Protestants at the stake along the way. Little wonder — considering these developments and that her father had beheaded her mother, Anne Boleyn — that Elizabeth, while not loath to put out feelers on the marriage market, opted never to wed during her 45-year reign.

Events across the channel, as Gristwood recounts the story, were no less illustrative of the trend. For example, readers may be surprised to learn that Florentine-born Catherine de Medici became Queen of France through marriage, served briefly until her sovereign died, then later took over as queen mother, calling the shots for her three sons as each succeeded to the French throne. All in all, Catherine stood at the center of events for a half-century.

Gristwood chronicles the roles of many other women rulers and powerful influencers during the period. They include Christina of Denmark, Marie de Guise, Margaret of Austria, Louise of Savoy, Anne of Bohemia and Hungary, and Anne de Beaujeu, among a score of others.

Game of Queens supplies a masterful account of these individuals and of many more ambitious, often public-spirited women of royal blood in 16th-century Europe. Indeed, there are so many significant players pacing regally through Gristwood’s saga that the reader might anticipate some narrative confusion.

But the author keeps people and events straight for us by supplying a rich index, a year-by-year chronology at the front of the book, a set of family trees organized by dynasty, and, most helpfully, capsule biographies of the key players in a Dramatis Personae section. Her compact chapters, organized around the nation(s) and the short timespan she covers in the chapter (“Exits and Entrances: The Netherlands, France, and Italy, 1530-1531”) aid greatly in the flow of narrative, as well.

Game of Queens vividly tells the stories behind the unprecedented emergence of powerful women in the games countries played in the 1500s. If you have any interest in European diplomatic history or even feminism, this book is worthy of your attention.