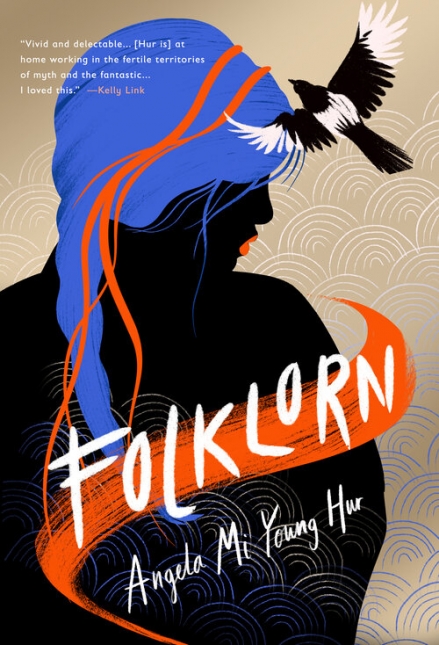 The French are proud for being known as bon vivants, the Italians for their exuberance. The Korean people claim han, which can loosely be translated as resentment and revenge, as their national characteristic.

But what happens to han in the Korean diaspora? When cultures mix and myths collide, does the native sentiment of angry sorrow become something that empowers or stunts the displaced Korean? Angela Mi Young Hur addresses the cognitive dissonance and cultural confusion of the Korean diaspora in her ambitious and fantastical second novel, Folklorn.

Folktales are inordinately important to Elsa Park’s Korean immigrant mother, and the novel opens with her telling of the legend of the Emile Bell, which would not ring until a woman sacrificed her daughter to its molten bronze. “The recast bell was struck again, and the sound released was so beautiful, everyone paused to hear it and weep.” The bell seemed to toll, “E-mi-le,” which means “mommy” in an ancient dialect.

Elsa grows up to be a driven physicist researching neutrinos in Antarctica. “Neutrinos, one of the building blocks of all matter in the universe, are elemental particles, born from cataclysmic violence…But no one’s ever seen these elusive neutrinos. They’re called ‘ghost particles.’”

It’s no mistake that Elsa is researching ghost particles, as she herself is haunted by a “friend” who first appears in childhood to comfort her when her dad is violent or her mother cruel. The friend disappears for many years but returns after Elsa makes a mistake in the field in Antarctica. Her arrival coincides with the first words that Elsa’s mother has said in the 16 years since she fell into a catatonic state: “Where is the other girl?”

Elsa returns to Sweden, where she is doing her postdoctoral studies, but instead of pursuing her research, she is distracted by the reappearance of her childhood friend and obsessed with her mother’s folktales of sacrificed girls, the latter left for Elsa in the form of writings and woodblock prints. She becomes convinced that the daughter her mother claimed to have lost in childbirth was actually given up for adoption.

Since the Korean War, the story of Korea has been one of families separated by borders, North from South, and later through emigration, mostly to the U.S. But quiet as it’s kept, there is another Korean diaspora: the over 200,000 children who were sent out for adoption. Author Hur dares to go there.

Not only does Elsa speculate that her sister was put up for adoption, but she serendipitously finds herself falling for Korean adoptee Oskar Gantelius, a Swedish academic who specializes in Korean folktales. Elsa informs us, “With a population of 9.5 million, Sweden has over 9,000 Korean adoptees since the war, the highest per capita in the world. In absolute numbers, Sweden ranks third.”

When her mother dies, Elsa returns to her family home in Gardena, California, where she confronts her difficult relationships with her father and brother. Domestic violence is depressingly common in Korean families (Korean birth mothers have cited such violence as a reason for giving up their children), and the beatings that her father gave her mother and brother have been traumatic for the whole Park family.

Seeking to free herself from that cycle of abuse and the lingering effects of transgenerational trauma, Elsa searches for her sister through the trail left by her mother’s past. Instead of healing her, though, the close examination of her family’s history brings her ever closer to madness. Fortunately, she has the help of a good man in Oskar, and what she finds at the end of her journey is poignant and unexpected, delivering a beautiful, satisfying ending.

Folklorn is extremely ambitious in scope, and the writing never fails to deliver. The story, however, becomes bloated with too many themes and scenes and inner musings; the novel would have benefited from an editorial tightening of focus. It’s clear that the author has big ideas, but some of them should have been saved for another work.

Long in the shadow of Japanese and Chinese culture, Korean and Korean-diasporic literature is finally taking its place on the world stage. With Folklorn, Angela Mi Young Hur engagingly blends Korean folktales with literary traditions for a fresh take on both the universal story of identity and assimilation, and the national tale of han.

Alice Stephens is a Korean immigrant, author of the novel Famous Adopted People, editor of Bloom, a book reviewer, and a columnist for the Independent.