A novel about a family on the verge of splitting apart because of secrets, frustrated ambition, and disparate needs. 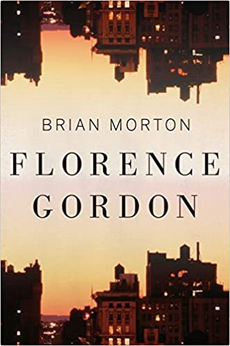 Seventy-five-year-old Florence Gordon is mean. She walks out on her own surprise party. She drops her friend’s BlackBerry in a pitcher of sangria. She calls her granddaughter, Emily, by the wrong name and doesn’t care. She’s also a longtime intellectual and feminist whose essays and political activism have suddenly inspired a glowing review in the New York Times, turning Florence into an overnight sensation.

Sliding between cantankerous loner and principled maverick, Florence is determined to write her memoir. But now her son and his family have returned to New York City, and their need for filial connection is proving too much for Florence to bear.

Florence Gordon is Brian Morton’s fifth book. His second novel, Starting Out in the Evening, was a finalist for a PEN/Faulkner award and was made into a film called “A Window Across the River.” Morton has been lauded by critics for taking on multiple, broad themes — such as love, death, and aging — at once, and setting them successfully against the literary/intellectual backdrop of Manhattan. Florence Gordon is no exception to Morton’s other works in terms of thematic breadth.

The book’s title is slightly misleading. Florence is only one of four fascinating Gordon characters we follow throughout. Florence’s son, Daniel, has returned to New York with his wife, Janine, who is on an academic fellowship.

Despite being from a family of intellectuals, Daniel has spent his career as a police officer in Seattle. The job doesn’t exactly suit him (he is a closeted intellectual, after all) and has put him at odds with his parents. But Daniel is solid and content, an outsider to his parents’ vocation.

Janine is a psychologist. Intense but willowy, she seeks profound connections with the people in her life, especially her mother-in-law, Florence, who has been a longtime idol. But Florence rebuffs all of Janine’s overtures.

“Being with Florence was never what you hoped it would be,” she thinks after another harsh family dinner. Janine’s relationship with Daniel might not be what she hoped for, either. After 20 years of marriage, they seem to have perfected slick banter as a cover for real intimacy. And Janine appears to be finding for the first time the deep-seated connection she has sought — but with a work colleague.

Emily is Daniel and Janine’s 19-year-old daughter. Like her mother, Emily’s romantic inclinations and openness often lead to disappointment. But Emily, taking a year off of collage, has the best chance of breaking through Florence’s barricades. Soon after her arrival in New York, she gets her grandmother to hire her as a research assistant, a job that will bring the young woman much closer to enigmatic Florence.

These characters strain against themselves and each other in a way that is both deeply familiar and unforgettable. The novel as a whole captures something of late writer Grace Paley’s politics and Jonathan Franzen’s domestic drama, but without Paley’s righteousness or Franzen’s snark. Or rather, any righteousness or snark comes from the characters, not from Morton’s authorial voice. The chapters are clipped, pared down to nothing but plot-driving, character-revealing basics, even as the book feels ambitious and intelligently rendered.

One particular scene encapsulates Morton’s depth. Florence is on the receiving end of an unthinking monologue from a fan. The fan balks when she responds with a barb. No one has even talked to her like that before.

“Do you know why that is?” Florence asks. “It’s because no one has ever taken you seriously before.” This no-holds-barred brand of truth-telling is underrated, but it offers a fast track to self-improvement for those who’ve the strength to bear it. If there is goodness in Florence, it’s in her willingness to take people on as equals.

Perhaps readers will pick up this book for the audacity and intrigue of straight-shooting Florence. But they will want to keep reading thanks to Morton’s high-stake scenes. His subtle treatment of realist versus idealist perspectives and contrast of intellectual rigor against emotional fluidity are memorable, poetic, and pitch-perfect.

In a bold move, the book’s resolution leans more to the realist side, which could leave the romantics among us longing for a happier ending. Still, the conclusion, like the rest of the novel, is not to be missed.

[Editor’s note: Florence Gordon was just named a fiction finalist for this year’s inaugural Kirkus Prize. The winners will be announced Oct. 23, 2014.]

Dorothy Reno is a DC-based writer who has been published by Red Tuque Books. She is currently at work on a collection of stories called The One That Got Away.

The Expatriates: A Novel

An escapist page-turner about the intertwined lives of three Americans in Hong Kong.