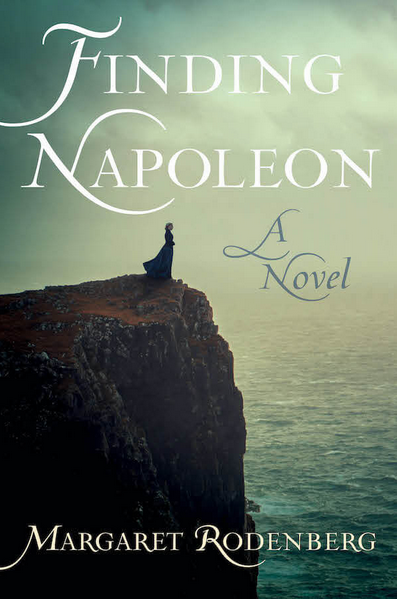 What comes after the inglorious defeat at Waterloo and subsequent escape from Elba? Margaret Rodenberg’s well-researched and engaging debut novel, Finding Napoleon, focuses on the last five years of Napoleon Bonaparte’s life, during his second and final exile to the small English-occupied island of St. Helena.

Rodenberg interweaves three compelling narratives: the first-person memoir of Albine, Countess de Montholon, who accompanies Bonaparte to St. Helena alongside her husband; a third-person accounting of Napoleon’s life on the island; and the romance novel Clisson that Napoleon is secretly composing to send to his son.

Rodenberg’s Napoleon — concerned about his expanding waistline, his stomach troubles (his father died of stomach cancer when Napoleon was young), and his sexual appetites — is suffering from middle-age malaise. The former emperor turns to gardening, long baths, dalliances, and squaring off with the petty tyrant and governor of St. Helena, the English Sir Hudson Lowe. This Napoleon is finely fleshed out both in his paunch and his earthiness.

This Napoleon, too, is more complex than his bodily desires. He remains regal and stoic, unable to sit still, working on his official memoirs and a political campaign to return to France and his beloved heir, lovingly nicknamed “the Eaglet.” He conspires with his most loyal advisors on clandestine ways to smuggle messages into and out of St. Helena, while also planning a series of increasingly desperate schemes to flee the island.

He is also a haunted man, preoccupied with mortality, loss, and bad decisions. By turns, he fears, loves, and loathes his overbearing mother, Madame Mére, whose influence over her son cannot be stopped by an ocean. And he still dreams of the many killed during his military conquests.

Rodenberg vividly captures all the ugliness of war: young men killed, and towns destroyed, the reek of blood and gunpowder, and the palpable pain of the wounded. Noting his failures to end slavery in French-occupied Saint-Domingue (Haiti), Napoleon plots with the people enslaved on St. Helena to rebel — an opportunity to both right a wrong and find an opportunity to escape. Like so many of his plans, however, it ends in failure.

He thinks often of his two failed marriages, first to his beloved Josephine, whom he divorces after she cannot produce a male heir, and to his second wife, Marie Louise, mother of the Eaglet. In the first chapters, Marie Louise abandons Napoleon to run off with an Austrian count rather than join her husband in uncertainty and exile.

In his sexual escapades with Albine, Napoleon knows she is unfaithful to her husband, to him, to anyone but herself. Still, he finds some reassurance there, eventually trusting her with intimate secrets, such as his novel.

Yet he is a hopeless romantic, too. In addition to his memoirs, Napoleon finishes Clisson, which he’d started writing while a soldier in his 20s. Its titular hero is a fictionalized Bonaparte, a young Corsican born into the brutality of war via his prodigious military talents. There, too, is a love triangle between Clisson and two beautiful heiresses, both based on Napoleon’s wives.

Even more than the complex portrait of Napoleon in his waning years, Rodenberg creates an exciting anti-heroine in Albine, a fading aristocratic beauty in survival mode. A schemer and a dreamer, Albine suffers the traumas of almost losing her head during the French Revolution; years later, she carries a crust of bread in her pocket to assure herself she will never go hungry again.

She is unfaithful to her emotionally distant husband and fails at love with Napoleon, with whom she has much in common: the physical and emotional scars of war, a beloved son left behind, and ceaseless ambition bound to a tiny island in the middle of nowhere. On St. Helena — filled with a cast of lively (though, sometimes, overabundant) characters — Albine steals silver, hearts, and the spotlight while plotting her own escape.

A novel of conflicting and intertwined stories, desires, and loyalties, Finding Napoleon offers an intriguing new look at one of the most famous men in history. We already know that Napoleon is destined to die in exile, but as to Albine’s fate? That is another story.

Colleen Kennedy is publicist and managing editor at Shakespeare Theatre Company. She also writes about art, culture, and music for District Fray. A former professor of English, she composes poetry and also writes about Renaissance perfume, Shakespearean performance, and horror films.