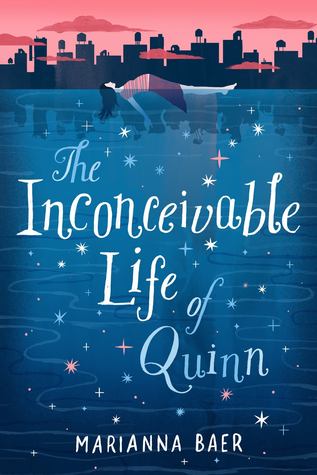 I’ve been told that being a 16-year-old girl is tough enough. Being a pregnant 16-year-old girl with a father who is a bestselling author making a spirited run for Congress certainly ratchets up the degree of difficulty.

But being a pregnant teen who’s adamant she’s still a virgin is, well, inconceivable. Hence, The Inconceivable Life of Quinn by Marianna Baer.

Quinn is pregnant, and being pregnant is never easy (I am bound by my marital vows to state that all references to pregnancy must make it clear that pregnancy is never easy), but in The Inconceivable Life of Quinn, the pregnancy is not the driving force behind the narrative. Rather, it is how Quinn became pregnant that creates suspense.

This is not a story of naïveté. Quinn knows how one gets pregnant, and her longtime boyfriend, Jesse, can certainly vouch for the fact that it is not his child. They’ve both taken health classes (complete with the requisite free condom) and know that heavy petting through layers of fabric is not one of the preferred methods of procreation.

While the world crumbles around Quinn and torpedoes her father’s congressional bid, she is adamant that she did not knowingly have sex. This obviously becomes a source of frustration to her parents, her friends, and, understandably, to said longtime boyfriend.

So Quinn, and the reader, are left with opposite ends of the spectrum for this pregnancy — an immaculate conception that stands at the gateway to Christendom, or a rape that she has cast as far from her mind as possible. The throng of faithful amassed in front of her Brooklyn home pray it’s the former; they certainly aren’t there to celebrate a sexual assault.

Baer plays the modern elements of this story well. Without the internet, some of her plotlines would never exist, and the story would have fewer layers. As we know, though, there are reporters and bloggers trolling and calling home phones, willing to take quotes from 10-year-old sisters.

Those same blogs and stories, no matter how based in the musings of a child fresh off the couch from watching SpongeBob, are read by people hundreds of miles away who just happen to be looking for the Messiah. And with answers proving elusive, Quinn ponders the potential of the divine. Maybe her unborn child is of God. After all, she is only beginning life, and the people holding vigil in front of her house seem so ardent in their beliefs.

“Was it possible that she’d had a connection to God back when she was a kid? Maybe she’d lost that connection because her father had told her it was wrong. If this daughter told him she had a relationship with God, wouldn’t he have forced her to stop believing it? Told her she was lying?”

The religious thread comes dangerously close to bogging down the storyline; thankfully, that’s not the story Baer set out to write.

The Inconceivable Life of Quinn might not lend itself to assigned middle-school reading (at over 350 pages, it’s not accessible for those rare gaps in standardized-test prep), but if a teacher were inclined to use it as a text to be read and discussed, it certainly is ripe with symbolism.

Quinn’s child may not be the second coming of Christ, but the conception could still be inconceivable. There is magic in our myths. Perhaps even a child who is magic. Inconceivable, but still a comfort.

Now We Can All Go Home: Three Novellas in Homage to Chekhov

These tales imagine what happens after some of the famed Russian writer's plays end.