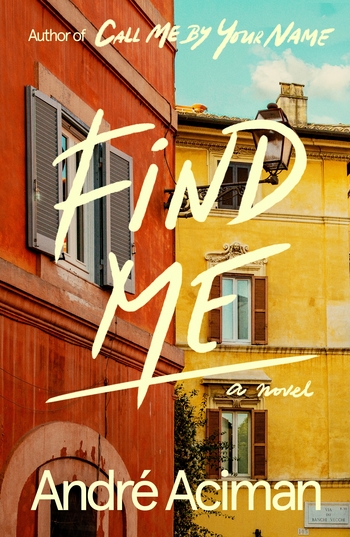 André Aciman’s Find Me, the intoxicating sequel to the phenomenally successful (mostly due to its Oscar-winning film adaptation) Call Me By Your Name, is an alluring, ardent study of fathers and sons and their lovers.

The book is structured like a sonata, an appropriate form given that music dominates most of the novel. There are three stories told in four parts — “Tempo,” “Cadenza,” “Capriccio,” and “Da Capo” — each presenting in exposition, development, and recapitulation a rhapsodic variation on the themes of desire and passion.

Readers anxious to know more about Elio and Oliver (the main characters of the earlier novel) may at first be disappointed. Or at least must have the patience to wait until they appear in Find Me.

The leisurely narrative pace of the first part, “Tempo,” details what happened to Samuel, Elio’s sympathetic, understanding father who moves into the forefront of the story. Ten years after the initial novel, the now-divorced classics professor is traveling by train from Florence to Rome to give a book reading. He also plans to meet Elio, who is now a concert pianist.

On the train, Samuel encounters a stranger, Miranda, an American expat photographer half his age. She is on her way to visit her ailing 76-year-old father. The strangers on a train (no Hitchcock tale here) strike up a conversation and make an instant connection. They quickly exchange confidences and the deepest “facets of darkness” of their lives.

Samuel and Miranda feel as though they have “known each other forever.” They believe they are soulmates who know each other “inside out,” recognizing that there was “very little real love…in both [their] lives.” They soon plot a future together even before their present is assured.

That present includes a joint visit with Miranda’s father, her attendance at Samuel’s reading, and a private tour of the Villa Albani (rarely opened to the general public) to view its renowned collection of bas relief and statuary. Though both had been resigned “never to hope again. Not in this lifetime,” they aspire to the possibility of enduring love.

With the lingering notes of incipient happiness echoing in the background, Elio finally arrives on the scene, almost halfway through the novel. And then only briefly. With the overlapping, recurrent melody of lost love in a life with “time stacked against us,” father and son visit old haunts and renew vibrant memories (what they call “vigils”) of their earlier trips to Rome.

With that, part two, “Cadenza,” begins with the development of the established themes. The novel jumps 15 years after Call Me By Your Name. Elio is in Paris, teaching music at the conservatory. One night, at a chamber music concert in a church on the Right Bank, he meets Michel, an attorney twice his age. (These age differences are a recurrent detail in both books.) Flirtatiousness moves to seduction. As Samuel did with Miranda, Elio and Michel exchange intimate backstories.

Like Elio, Michel had a close relationship with his father. And it involved music and a secret male lover. Together, the new couple unravels a mystery of what appears to be an original “musical score on eight double-sided sheets of onion paper” that Michel’s father kept safely hidden. In fact, it is a cadenza fashioned after Mozart and Beethoven.

At this point, Elio’s memories of Oliver intrude on his involvement with Michel. Elio wonders if anyone would send him a similar improvisation someday and say, “I am gone, but please find me, play for me.” He is, of course, hoping that would be Oliver, a love he has never forgotten.

Fate “plays it cards” in part three, “Capriccio.” In this brief section, as it does in its musical format, a lively, short fantasy mixes with the real and the imaginary. Twenty years after his first connection with Elio, Oliver is at a farewell party in New York City, waiting to return to teaching in New Hampshire. But there is an impediment. He is melancholy, misses Elio, and feels, at 44 years old and married with children, that he has been living “the wrong life,” a “dead man’s life.”

As Bach’s Arioso (a piece Elio once played for him) echoes in the background of an empty apartment, Oliver senses that he hears Elio calling out, asking him to find him, seeking a recapitulation. Oliver resolves to return to him to see if he can “redress the one mistake that threw [his] life off course.”

“Da Capo” — in musical terms, a return to the beginning — the final section, is an evocative coda set in Alexandria, Egypt. The “lure of bygone days” is a siren’s call. Readers anticipating an Elio/Oliver reunion are rewarded as Aciman comes full circle, from the beginnings in Call Me By Your Name to the satisfying conclusion of Find Me, a “final chord resolving an unfinished melodic air.”