This powerhouse thriller poses complex questions about human nature and the strength of a mother’s will. 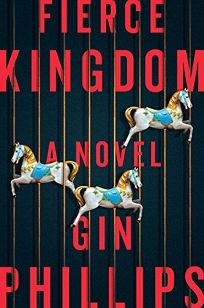 It might be tempting to skip a thriller centered around a mass shooting, but to avoid Gin Phillips’ Fierce Kingdom would be a mistake. It’s a powerhouse of a read that balances empathy and fear as it poses complex questions about human nature.

Joan and her young son, Lincoln, are getting ready to leave the zoo at the end of the day, when Joan hears a popping sound, sees people fall, and realizes that they are in the midst of a mass shooting. Hiding places are either too obvious or already occupied by dangerous animals. The shooters are hunting people and animals alike, and there is no safe place.

The book unfolds across three hours in the zoo, following the event from beginning to its presumed end. Phillips uses this simple framework to its best advantage, creating suffocating tension, forced introspection, and a close variety of terror that is as different from the news cycle as a helicopter shot is to a closeup. Fierce Kingdom operates in the intense intimacy of being trapped.

Much of Fierce Kingdom’s tension comes from lack of space. Sound and light quickly become enemies. Joan and her son hide in an empty animal exhibit, where their survival is directly reliant upon keeping a 4-year-old appeased and silent for as long as possible, knowing that he will get hungry, knowing that no matter how good Joan’s child is — and Lincoln is an almost preternaturally perfect kid — he is a child and will make noise. Lincoln presents a different (though just as powerful) threat than the assailants. In Phillips’ zoo, a crying baby has the same deadly potential as a bomb.

It would be easy to frame Fierce Kingdom as a story of a mother risking everything to protect her child. But it’s a trickier, more complex book than that, one which explores women’s roles as mothers, spouses, and children, and as presumed saviors.

Filling out these roles are Kailynn, a 16-year-old zoo employee, and Margaret, a retired teacher, who are also present at the shooting. They supply important perspectives on how women appear to each other, and how views on self-preservation shift at different life stages. As much as they deal with each other, each, at different points, interacts with the attackers. While the novel is a deep dive into the female psyche, it is also a dialogue about men and women.

Early on, Joan has access to her cell phone. She calls her husband:

“She lets him talk. She understands his need to hear her, and she thought she had the same need, but his voice does not make her feel like he’s with her — it makes him feel farther away, or, no, it makes her feel farther away. Like a part of her is floating toward him, out of the zoo, into life as she knows it, and she does not want to float anywhere. She cannot. She must be here, completely here. She cannot console him at the moment.”

Men, when they do appear, need to be comforted, understood, listened to — often as a means of women’s survival. As Phillips writes about women and their instincts for survival, she is also searching for the roots of violence.

During it all, Lincoln is kept quiet with a purse full of action figures that do battle. An aptly placed Predator toy stands in as a symbol of both the hunter and the hunted. Lincoln has seen the movie, but much of the violence had gone over his head. He remains, above all things, a sweet child. The psyches of the shooters display how these same films and war games can be warped. If there is a fault in Fierce Kingdom, it might be that this issue could be plumbed more thoroughly.

Fierce Kingdom offers no answers; it does not proselytize about gun control or mental-health advocacy or suggest any remedy. What Phillips offers instead is what we have long known: Since the Columbine shootings, something has changed in the American psyche. These events reveal who we are.

Over the three-hour night, Joan is laid bare; for better and worse, so is the reader. Though there is some carnage, Phillips is intentionally light on details, which is brilliant and necessary. As readers and viewers of news, we already know how these events unfold. Phillips takes advantage of that shorthand. Guns are noted only briefly; the reader supplies the rest.

When we do see blood, it is impactful, and we are not deadened to it. Phillips paints with shadow, using the claustrophobia of night and the zoo’s cages. In those brief moments of light, everything is too bright and garish, and we know that for Joan, and for Lincoln, these moments are meant to be scarring.

The strongest takeaway from Fierce Kingdom is that we have become desensitized by the frequency of mass shootings, by the very mass of them. We have begun to think in numbers. Through intense introspection, minute-by-minute breakdowns, taut prose, and the primal relationship between mother and child, Phillips forces us to remember the individual in a way that is achingly personal.

It is a fast, occasionally brutal book that can be read nearly in real time. But it lingers and forces us to ask uncomfortable questions, the answers to which are more troubling, and also more beautiful, than we might anticipate.

Erika Swyler lives and writes in Long Island, NY. Her novel, The Book of Speculation, was one of BuzzFeed’s 24 Best Fiction Books of 2015, and a Barnes & Noble Discover Great New Writers selection. She is at work on her second book. Follow her on twitter at @erikaswyler.