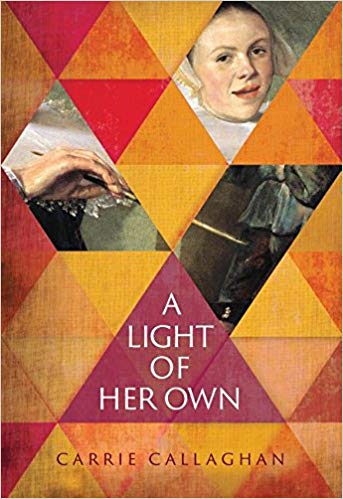 Judith Leyster was a painter of the 17th-century Dutch Golden Age. Not as well known today as some of her contemporaries like Frans Hals and Rembrandt von Rijn, Leyster was the first and, for a long time, the only female painter allowed into the Artists’ Guild of the city of Haarlem.

Though most of Leyster’s life beyond her painting has been lost to history, Carrie Callaghan, in her debut novel, A Light of Her Own, has brilliantly re-imagined this woman who dared to believe herself the equal of her male Artists’ Guild co-members.

In richly descriptive prose befitting Leyster’s lustrous work, Callaghan tells the story of the young Judith in her early twenties, her parents having years before disappeared from her life, and her younger brother barely able to keep himself alive.

She longs to leave the workshop of her master and strike out on her own, but the rules of the Artists’ Guild prevent her from selling her own work until she is established as a master — and, then, only through the powerful guild itself.

Yet how does one establish one’s self if one has no money for the basic tools of the painter’s trade — brushes, boards or canvases on which to paint, the pigments and the linseed oil with which to mix them to create the paint? This is the reality that Callaghan vividly portrays.

In contrast to Judith’s undaunted determination and ambition is her dear friend, Maria, daughter of Judith’s painting master and a devout Catholic in that sturdy and strongly Protestant nation where even the acknowledged presence of a priest is an infraction of the law. In contrast to Judith’s drive for independence, Maria lives with an overwhelming sense of guilt, a strongly held belief that she is a nearly unredeemable sinner.

When an opportunity arises to earn money through a clandestine sale against guild rules, Judith does so, knowing the risks, but daring to anyway in order to have the funds to set herself up in her own workshop and to join the Artists’ Guild.

But the repercussions of that act come to her in ways she could never have anticipated, even as she still fights against the widely held notion that a woman could not be a professional painter.

In alternating chapters, we read of Maria’s repeated attempts to find expiation for her almost surely imagined sins. Her need for self-sacrifice sends her on more and more dangerous paths that eventually nearly cost her her life.

Meanwhile, Judith’s victory in winning membership to the Artists’ Guild is short-lived, for she has little success in selling her work, and then, worse, the supply of linseed oil — vital to painters — unexpectedly and unexplainedly dries up. Oddly, only the more established artists seem able to find any.

Involved in a murder scheme she does not understand and desperate to find linseed oil, Judith commits acts of which she feels ashamed but cannot resist, for she believes her very existence depends upon them.

At last, an explosion reveals the source of (and rationale behind) the oil shortage, and the fearless Judith challenges the senior members of the Artists’ Guild to face their perfidy and make good on their reputations for honesty and fairness.

In the course of the novel, we meet several familiar historical figures, portrayed for us as ordinary human beings: the mathematician and Orientalist Jacob Golius, whose wife dismisses his complaints that he never gets his scholarship done, since the reason for that is his love of conversation with friends; the painter Floris van Dyke, with his superior attitude; and Frans Hals, who constantly finds himself mired in debt.

One of Maria’s attempts at redemption brings her into the home of Golius, who is entertaining a priest, Father Cloribus, and another visitor introduced only as Rene, whom the reader at first suspects and then realizes is, in fact, Rene Descartes.

Maria witnesses an exchange between the deep-thinking Descartes and the feckless Cloribus, as the two men discuss a holy artifact that Maria has come to retrieve. The priest tries to avoid handing over the artifact, saying he isn’t sure where the item is, an excuse Descartes clearly sees through:

“Rene leaned back in his chair. ‘Something sacred like that, you know whether you have it or not. Like my rosary, blessed by the Pope. I always know where it is. So, do you?’
‘It’s hard to explain.’
‘No, it’s not, Father. Metaphysics is hard to explain. The location of a sacred object? Non, I think not.’”

In A Light of Her Own, Carrie Callaghan has created a remarkable pair of heroines: Judith Leyster — bold, ambitiously independent, yet flawed; and Maria de Grebber — fearful but determined. The two women spend much of the novel estranged, yet still inexorably linked.

And the Netherlands of the 17th century is described to us as only an artist — and a realist — could: sunlight striking an object in such a way as to catch the observer’s attention; the color of a doublet not just blue, but azurite; the constant rain; the overwhelming odor of donkey feces in the heat of midday; the debris floating in the muddy waters of the Dutch canals.

With details like these, A Light of Her Own catches the reader in a web of intrigue, art, and ambition and does not let go until the final page.

Sarah Shoemaker is the author of four novels, the most recent of which is Mr. Rochester. She is a former university librarian and currently lives in northern Michigan with her husband.