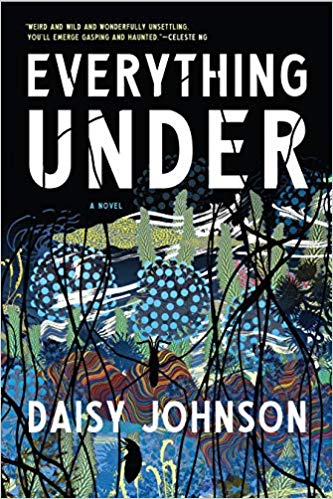 Debut novelist Daisy Johnson has achieved a singular distinction: Her book was shortlisted for this year’s Man Booker Prize. At 27, she became the youngest writer ever to be so honored.

Everything Under retools the Oedipus saga for the 21st century. Faithful in outline to her ancient model, Johnson creates a disquieting tale that oscillates from flight narrative to fateful quest.

Johnson’s book, set in the murky riverlands of central England, makes heady demands on the reader: stark shifts in voice and sometimes unsettling dislocations of time and place. Evocative and haunting, her writing is vividly imagistic in ways its classical model could only attempt along its choral borders.

If you read no further, hold on, at least, to this: Everything Under is capital-B Brilliant, capital-V Virtuoso. It’s supremely worthy of its Man Booker honors and heralds the emergence of a significantly talented British writer.

Misapprehension, confusion, and missteps bedevil Johnson’s three pivotal characters as each, alone, wanders the river, from time to time drifting into the remembered past. On the river, they find, or rediscover, each other. Riddles and puzzles trail them; piecemeal memories dog them.

Johnson’s Oedipus is a gender-shifting adolescent: Margot yearning to become Marcus. Like Sophocles’ tragic hero, Margot flees home to avoid fulfilling the curse. In making her escape, in remaking herself as Marcus, she, of course, sets fate in motion.

Margot’s getaway route is the towpath along the river as it sluices through shabby industrial exurbs. She sleeps rough:

“She crawled as far as she could into the bush. There was a slime of leaves, beer cans cut open, a white-filmed balloon that skidded under her bad leg. Through the hedge she could see the canal, lit by the oil-spill throw of street lights, the surprise exclamation of car headlights rising and then lowering over the bridge…In the first inch of waking she had forgotten. Then it came back to her. She could not sleep after that. There was a crease of frost on the ground and the sleeping bag was wet. She watched the dirty morning descend over the water.”

Another wanderer on the towpath, years later, is Gretel. She’s searching for the mother who raised her into her teens, then abandoned her. An Oxford lexicographer, unwinder of the implicate mysteries behind words, Gretel recalls a snippet of memory shared by her mother, Sarah:

“There had been a bad breakup with a professor who sometimes came into the café you worked in. A regally greying professor who, each time you were finished, would sit on the side of the bed and weep. Told you as he was leaving for the last time that he wouldn’t come again because you looked like his daughter. Turned at the door and said — face washed clean and mean with tears — that he thought his daughter might be a slut the way you were.”

Mother-daughter relationships — healthy, estranged, taboo — figure throughout this unsettling tale. So, too, do puzzles, riddles, shared language codes, and thoughts unvoiced. The workings of fate are shrouded for all. For Margot/Marcus, they beckon through a vague hulking dread; for Gretel, they’re bound up in a confused compulsion to salvage filial duty through a recovered relationship with Sarah; for mother Sarah, it’s a land-locked routine, the crust of rime over guilt, that in the end undoes her.

For this reviewer, Everything Under has triggered a kind of modernist catharsis more persistent than that of any novel I’ve read this year. It brings a newly wrenching relevance that recovers the dormant power of its original and, in many ways, amplifies and transcends it 25 centuries later.