Ever Green: Saving Big Forests to Save the Planet 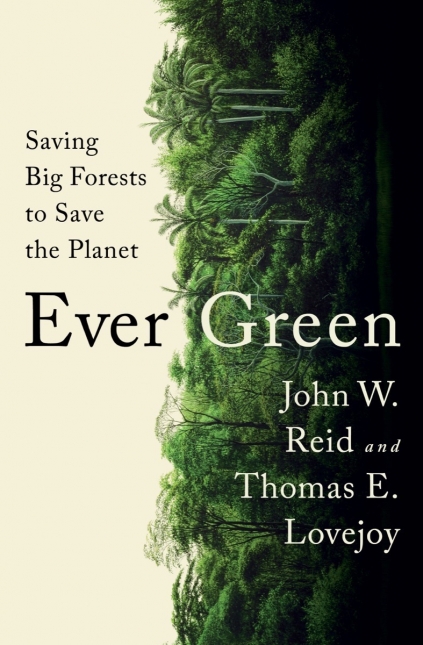 I can’t count the number of times I’ve watched “Shark Tank” and smacked myself on the forehead when someone successfully pitches an idea so simple that I get mad at myself for not making millions by thinking of it first. Reading Ever Green: Saving Big Forests to Save the Planet caused me the same self-flagellation — but at a more existential level.

Failing to conceive of a basic solution to an insignificant consumer problem pales in comparison to failing to see the forest for the trees. In Ever Green, authors John W. Reid and Thomas E. Lovejoy proffer a cure for combatting climate change that’s so elementary, it’s shocking we as a society haven’t done it already: Leave the world’s five biggest forests alone.

“Wild megaforests offer a simple, existing solution to achieve carbon storage, local climate stability, and the survival of various, individually useful, mysterious, and beautiful carbon-based organisms,” they write. “The woods require no engineering and are free of surprise side effects. Thrift, common sense, risk aversion, and an appreciation for natural beauty all argue for this solution. A smart approach to managing the planet, which we must, is to leave some parts, including the megaforests, mostly to manage themselves.”

Listing the five “megaforests” from smallest to largest as New Guinea, Congo, Amazon, North American Megaforest, and the Taiga, Reid and Lovejoy use the term “intact forest landscapes” (IFLs) to convey that we should stop denuding them:

“To keep Earth livable, we humans must grow out of our habit of transforming woods into landscapes of grass, shrubs, dirt, and pavement.”

In other words, let unspoiled areas be — a theme David Gessner also hammers home in his latest book, Leave It as It Is: A Journey Through Theodore Roosevelt’s American Wilderness. While he extols the benefits of preserving more parkland and linking it together so that wildlife can migrate where needed in response to climate change — creating a healthier planet in the process — Ever Green takes more of a global satellite view.

Reid and Lovejoy provide financials so wonderful they’d make even “Shark Tank’s” irascible Kevin O’Leary smile. “Keeping carbon in tropical forests costs a fifth as much as reducing emissions from energy and industry in the United States or Europe,” the authors report. “And it’s more affordable by a factor of at least seven than regrowing forests once they’ve been felled. This opportunity is still, astonishingly, overlooked and unmentioned in most national climate plans.”

While noting the dire news that more than 10 percent of IFLs were fragmented or lost completely from 2000-2016, the authors share the surprising statistic that the percentage of the earth’s protected land rose from 4 percent in 1990 to 17 percent since then — and that countries across the globe seek to reach 30 percent by 2030. This is, in part, because governments already own much of the land in question. Such protected expanses, the authors shout, are “arguably the greatest success story in the history of modern nations.”

So, yes, Virginia, there is hope that we can save ourselves. Actually doing it, however, starts with looking in the mirror and asking some tough questions:

“Given that intact forests give us rain, food, a healthy atmosphere, clean rivers, kaleidoscopic biodiversity, and feelings of primal spiritual connection, why do people behave as if we can’t wait to get rid of them? Why do we turn the whole into parts?”

The authors answer their own questions in a plethora of ways, with a heavy focus on rethinking how humans understand and operate in a global economy. They suggest we view our giant forests not from either an environmental or an economic angle but from both. Governments, companies, and individuals can all work together on this reframing.

Reid and Lovejoy explain that “there are also plenty of examples of provinces and nations that use environmental laws and nature reserves as collective responses to ‘produce,’ in an economic sense, clean air and water, game and more obscure wildlife, old trees, and the continued existence of forest-linked cultures. The three biggest megaforest countries, Brazil, Russia, and Canada, have already done remarkable work to protect the woods.”

While much of the book focuses on practical solutions for conserving the great forests, Ever Green tantalizes readers with profound side trips, too. I found most fascinating the “Forests of Thought” chapter, with its passages relating to how different cultures use unique vocabularies to describe the natural world. Many have words that depict the earth and its inhabitants as a family. And some Amazonian peoples “use the same word for green and blue — a single color hinting at a connection between the two overhead vaults, one of trees and the other of sky.”

In short, “Megaforests have spawned thousands of cultures, each with its own unique way of perceiving reality, processing information, and making it into verbal expression. Each, in other words, with its own way of being in the world.”

There’s something beautiful in learning how people different from us perceive and interact with the natural world. Certainly, such greater understanding can build bonds that help nations craft the global-scale policies needed to save our five biggest forests.

Reid and Lovejoy, though, don’t leave it at that. They use their final chapter to invite us each to do two things. The first is to put greater conscious thought into our own economic choices — from buying smaller houses to using our cars less.

The second strikes at my own Thoreauvian mantra for living. “Go outside. Frequently.” If that’s not feasible, the authors suggest a smaller step: Spend more time anywhere outdoors, no matter how modest your own neck of the woods may be.

“Trees, even in small groups, exhale monoterpenes that reduce stress, lower blood pressure and heart rate, and perhaps even trigger dopamine,” they write. “So stay long enough to feel your mood change, watch shadows shorten or stretch. Get caught by rain or snow or nightfall. Get a little lost…The woods at hand are a practical place to meet the rest of creation.”

That place, even more so than the set of “Shark Tank,” is also the perfect spot for pitching the winning formula to save our planet and ourselves.

Christopher Lancette is a nature writer in Silver Spring, Maryland, and publisher of a passion project at EyeOnSligoCreek.com.