A perplexing, rewarding tale of infatuation and erudition. 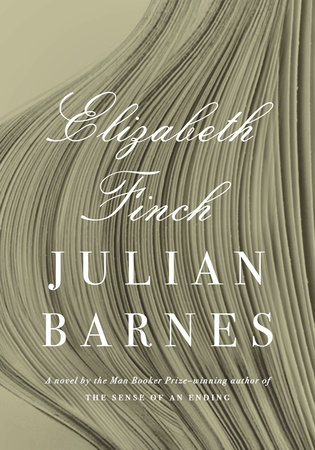 “You will have observed that the title of this course is ‘Culture and Civilisation,’” declares the eponymous subject of Julian Barnes’ 25th novel. Elizabeth Finch is older, vaguely fallen from grace, teaching an adult-education class. She speaks “without notes, books or nerves” and continues: “Do not be alarmed. I shall not be pelting you with pie charts. I shall not attempt to stuff you with facts as a goose is stuffed with corn.” Rather, she promises a dialogue and, finally, “rigorous fun.”

“I shall expect rigour from you in return. Winging it will not suit.”

Understood? There are books you read on the beach and others you read at a desk, pencil at the ready. Elizabeth Finch is the latter.

But it is also fun, and not always rigorous. Narrated by a fitfully employed actor named Neil, the book is many things: an academic novel, a critique of cancel culture, a paean to those we learn more from than ever expected. Neil signs up for a blandly titled, no-credit night course; his life is forever altered.

This story’s surprises are not noisy but they are sharp. If knowing that Elizabeth Finch is about a student enthralled by his no-nonsense teacher — all written with Barnes’ trademark easy erudition and wit — is enough for you, then off you go: Buy, read, repeat. The rest of this review will spoil the pleasure of a raw read.

That said, there’s not much to spoil, especially for fans of Barnes’ early novel Flaubert’s Parrot, which somehow distilled a detective story, a literary biography, and a stuffed bird into one unforgettable read. Elizabeth Finch repeats that recipe to a degree.

In its first part, we meet Finch, Neil, and some others. Finch is as knowledgeable as she is private, and watching Neil ferret out details of her life keeps the pages turning, even as we feel increasingly unsettled with his (our) voyeurism. What was the public “shaming” she endured? Did she ever have a lover? Does her genealogy have anything to do with her academic interests?

The stakes rise when Finch dies (of natural causes), and Neil discovers she’s left a trove of papers for him, including a few cryptic notes regarding “J., dead at 31.”

After a few false starts, Neil figures out that J. is Flavius Claudius Julianus — a 4th-century Roman emperor more commonly known as Julian the Apostate — and decides Finch has left him these papers so that he’ll research and write Julian’s story. Finch, in other words, will be remembered not by a Last Lecture but a last assignment, one which Neil will eagerly undertake “to please the dead. Naturally, we honor the dead, but in honouring them, we make them even more dead. But to please the dead, this brings them to life again. Does that make sense?”

If it doesn’t, again, this is not your book. Neither is it if you will be frustrated by a novel that then pauses to spend 50 pages recounting the life of Julian, whom we learn “was an emperor who never set foot in Rome” and who only briefly ruled as Caesar, but whose reign is considered a pivotal point in history at a time when Christianity’s future hung in the balance.

Julian, a prolific writer and tolerant ruler, refused to make Christianity the official state religion, permitting instead all faiths. (Julian himself worshiped many gods, often at the expense of countless sacrificial animals.) But he died young. What if he’d lived?

Neil imagines just that near the center of the book:

“For his supporters down the centuries, Julian was that seductive thing: a Lost Leader. What if he had ruled for another thirty years, marginalising Christianity year by year, and gently, then forcibly, recementing the polytheism of Greece and Rome? And what if the policy was pursued by his successors down the centuries? What then? Perhaps no need for a Renaissance, since the old Graeco-Roman ways would be intact, and the great scholarly libraries undestroyed. Perhaps no need for an Enlightenment, because much of it would already have happened…By the time the Age of Reason came around, we would already have been living in it for fourteen centuries. And those surviving Christian priests with their peculiar, eccentric but harmless beliefs — or rather, beliefs made harmless — would rub shoulders on equal terms with pagans and druids and spoon-benders and tree-worshippers and Jews and Muslims and so on and so on, all under the benign and tolerant protection of whatever European Hellenism developed into. Imagine the last fifteen centuries without religious wars, perhaps without religious or even racial intolerance. Imagine science unhindered by religion.”

Imagine: Julian himself would make ample fodder for a literary work, and has for centuries, as Barnes-as-Neil helpfully surveys. But Elizabeth Finch’s core subject is its titular figure, and at the end, she remains as mysterious as she was at the beginning. The book’s conclusion leaves us wondering what, if any, mysteries Barnes wants us to pursue.

Are we to conflate Julian and Finch? Are we, the readers, Neil? Are we to read anything into the fact that author Barnes and the late emperor share a name? That Finch uses an avian idiom like “winging it”? And why does the resolution here seem so unresolved? It can all feel frustrating — but so it goes with any great teacher whose core lesson is so often, “You figure it out.”

Liam Callanan’s new novel, When in Rome, will be published in March 2023.