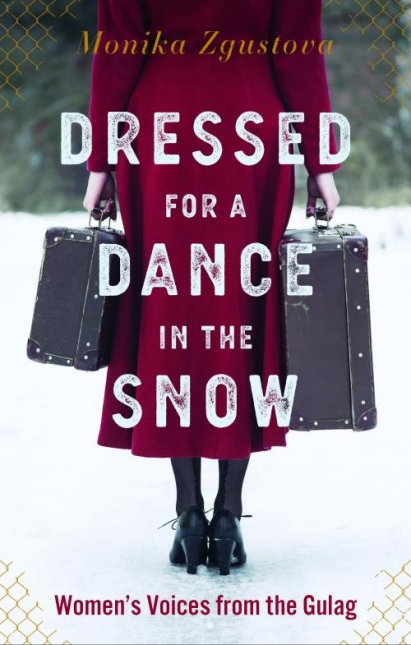 In a suburb outside Moscow, an elderly woman in a wheelchair gestures at her empty apartment.

“I never had anything, just books,” she explains to her guest. “I was always a great reader, but my children did not let me bring my books here, just three or four. They say books don’t have a future.”

She ushers her guest, author Monika Zgustova, into her sparse kitchen. There, the woman, Valentina Iyevleva, doesn’t worry about the future. She dives into the past.

Valentina, like the eight other women interviewed in Zgustova’s masterful Dressed for a Dance in the Snow, survived the vicious Soviet gulag prison system. There, they suffered torture, deprivation, hopelessness, suicide attempts, and more. But they lived to tell their stories.

At least 18 million people were imprisoned in the gulag, a network of labor camps and prisons evolved out of the czarist exile system into totalitarian enforcement. Over 34 years, somewhere between 2-10 million victims died there. (Historians differ on nearly all the numbers in this paragraph.)

Valentina steeps her Earl Grey tea and tells her story:

“Two weeks later, when they had taken me out of solitary, I went to the work area. There were tubs filled with quicklime. I ran to them, found a big glass, and filled it with the stuff. Right away I drank it down.”

The poison tore at her insides and sent her to the infirmary, where a kind friend sat by her side for weeks, fed her, and spoke to her. “Where had that guardian angel come from, that angel who sat down on my bed every day and fed me so patiently?”

It is the moments of kindness and even beauty that stand out in the survivors’ stories. Women recite or compose poetry, or marvel at the snow-covered wasteland.

Zayara Vesyolaya, whose arrest gives this book its tender title, found love in Siberia as a fellow prisoner gave her the strength to endure. She remembers:

“When Nikolai was telling me this story, the moon ducked behind the clouds from time to time, but now it came out in all its brilliance. Under its silvery light, the snow on the fir trees looked like cotton, and the snowflakes sparkled a thousand colors.”

The ability to see beauty amidst the pain is the haunting mystery at the core of this book. “Those bitter, hard years were my best school, a school that would help me throughout the rest of my life…If I had to live my life over, I would not want to avoid that experience,” one woman says.

Finding redemption in suffering should not, perhaps, surprise us, but in a setting as bleak as the gulag, we don’t expect it. At least, I didn’t, until two years ago when I came across a similar story while researching the American who is the subject of my second novel, Salt the Snow.

Milly Bennett’s Russian husband was sent to a gulag labor camp in the 1930s, and she fought her way to visiting him in 1934. There, she found him strangely content in those terrible surroundings. Milly returned to Moscow confused and disheartened.

I used this apparent contradiction to inform part of the mystery of my book, though I think Aminatta Forna treats the question of suffering and satisfaction with more elegance in her novel Happiness. Trauma is not destiny, one of her characters argues. “What if we were to have revealed to us that misfortune can lend life quality?”

While not all Zgustova’s interviewees agree that the gulag ennobled them, they do all have something to say about human purpose in life. To distill their experiences into a single platitude would flatten this marvelous book and do it a disservice. Instead, Zgustova lets these nine women speak for themselves and the others whose paths they crossed.

These straightforward interviews carry enough hints at philosophy and wisdom to keep an active mind engaged for hours. What keeps humans alive in horrific circumstances? Is it will, or having a purpose, or love? Or, simply, luck?

There are no answers here, but there are clues. One woman’s path to the gulag began, in part, with a poem. When a fellow classmate read some verses out loud in 1950, the teacher objected.

“Don’t you see it’s sad? Some feelings are not meant for Soviet youth,” the teacher declared.

But Susanna defended the poem, noting that everyone is sad sometimes.

“Soviet youth should never be. Sadness is decadent,” the teacher concluded and, presumably, added a note to Susanna’s file.

In perfect totalitarian irony, the Stalinist system banned sadness while inflicting it on a mass scale. But human feelings cannot be denied, and the stories in this absorbing book prove that the ordinary bodies we inhabit are capable, because of decadent emotions, of extraordinary feats of endurance, courage, and love.

Carrie Callaghan is author of the historical novels Salt the Snow (2020, CRP/Amberjack) and A Light of Her Own (2018, CRP/Amberjack). She lives in Maryland with her family.