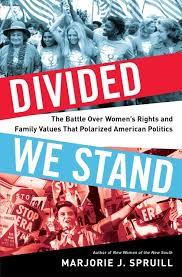 Like most of us, publishers probably expected Hillary Clinton to win. That’s what I anticipated when I agreed to review Divided We Stand, Marjorie Spruill’s comprehensive history of the National Women’s Conference of 1977. Better known as the NWC, the conference was born of a 1975 congressional act that instructed delegates “to set goals for the elimination of all barriers to the full and equal participation of women in all aspects of American life.”

But the NWC featured people and political trends whose significance is all the greater given the election’s outcome. The book details how the conference provoked a bitter debate between feminists and conservative women activists. The resulting antagonism, Spruill contends, spilled over into party politics: “Whereas in the early 1970s both Republicans and Democrats supported the modern women’s movement, by 1980 the GOP had sided with the other women’s movement, the one that positioned family values as in opposition to women’s rights.”

Spruill offers substantial evidence that women’s rights had long been a bipartisan cause. Both Republicans and Democrats had endorsed passage of the Equal Rights Amendment (ERA) since the 1940s. In 1970, Spruill reports, “Women’s rights supporters from across the ideological spectrum and across the nation” marched to celebrate the 50th anniversary of the 19th Amendment. The following year, a “kaleidoscope” of women from both parties formed the National Women’s Political Caucus to encourage women’s participation in electoral politics.

Bipartisan congressional majorities also supported women’s rights. In 1972 alone, Congress passed Title IX (barring sex discrimination in educational institutions), the childcare tax credit, and stronger enforcement authority for the EEOC. And it was 1972 when both Strom Thurmond and Ted Kennedy voted for the ERA. Three years later, Congress established the conference and directed it to recommend a National Plan of Action to the president, who in turn was required to propose implementing legislation.

At this point, Spruill asserts, ideological differences began to emerge. Led by right-wing icon Phyllis Schlafly, conservative women fought the establishment of a national women’s rights policy. After years of combating communism and liberalism, Schlafly had taken up the anti-ERA cause in 1972. Later, she established the Eagle Forum as “an alternative to women’s lib” to contest feminism across the board.

Under Schlafly’s deft leadership, conservative women turned out en masse to oppose the conference. Many women responded to anti-abortion appeals from the Catholic Church. Schlafly also convinced Mormon leaders to instruct the Women’s Relief Society to resist the NWC’s feminist policies. And Schlafly continued to work with her longtime collaborators in the John Birch Society and other right-wing organizations.

Schlafly and her allies succeeded in sending 200 conservative delegates to the conference in Houston. But they were outnumbered four to one by feminist delegates. The NWC overwhelmingly endorsed 26 policies designed to promote women’s rights. It was a forceful and comprehensive plan.

Recognizing their inability to change the event’s feminist tenor, conservatives convened a competing pro-life, pro-family rally across town. The crowd of 15,000 cheered Schlafly and other speakers “enthusiastically urging women to subordinate themselves to the will of God, their pastors, and their husbands.”

The tensions that surfaced in Houston ultimately doomed the NWC’s recommendations. President Jimmy Carter balked. His report to Congress was “primarily a statement about accomplishments already made, not promises of further action.” The National Plan of Action was dead.

As Spruill documents, the 1980 presidential campaign cemented the parties’ split over women’s rights. The Democratic platform broadly endorsed feminist positions, including government-funded abortions for poor women. By contrast, the GOP abandoned the party’s 40-year support for the ERA and endorsed a constitutional amendment banning abortion. Republican orthodoxy embraces these anti-feminist policies even today.

Spruill’s blow-by-blow description of the NWC and its aftermath reflects exhaustive research. Her interviews of key participants both illuminate the narrative and preserve first-hand accounts for future scholars. Unfortunately, at times, the details overwhelm.

Is it essential to tell us that the San Jacinto Girl Scouts presented the colors to open the conference? Listing the titles of articles in the May 1973 issue of the Phyllis Schlafly Report seems excessive. These and similar minutiae can make it hard to follow the larger story.

And it is a story worth telling. Gloria Steinem’s 2015 memoir calls the NWC “the most important event nobody knows about.” Divided We Stand rectifies that omission. The book is the definitive record of a critical event in 20th-century American history.

To the extent that Spruill links today’s “seemingly intractable” political polarization to the NWC and its reverberations, she is less convincing. How did the conference contribute to the toxicity of present-day American politics? Spruill’s account goes a long way toward answering that tantalizing question, but not quite far enough.

In an eerie echo of 1977, feminists and conservatives are still gathering to promote conflicting agendas. The 2017 version featured hundreds of thousands of women’s rights supporters marching in protest the day after a far smaller group of conservatives attended Trump’s inauguration.

In her keynote address at the Women’s March on Washington, Steinem declared, “[W]e're never going home. We're staying together. And we're taking over.” I look forward to the next chapter.

Susan Green is a lawyer who has represented working women and men for over 20 years. She teaches women’s history and literature in Washington, DC, and was a senior review editor for the Washington Independent Review of Books from 2011 to 2014.