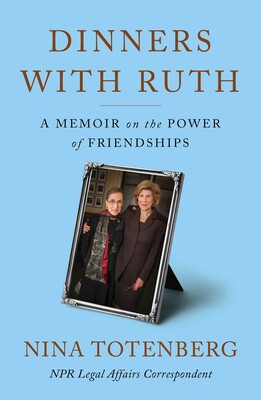 Nina Totenberg has been reporting on the Supreme Court since her days with the National Observer in the early 1970s and has known the late Ruth Bader Ginsburg since 1971. In many ways, the story of their friendship is either a tutorial or a reminder — depending on a reader’s age — of women’s hard-fought battle late into the 20th century to overcome their legal status as second-class citizens.

Hanging over this memoir is also the chilling knowledge of how quickly that progress is being ripped away; we are seeing and feeling it in real time. One wonders what Ginsburg would make of her beloved court now, given how entirely it has transformed since her death only two years ago.

Totenberg’s Dinners with Ruth: A Memoir on the Power of Friendships is as described: a recollection of her life written as a love letter to family and many well-known friends, with an emphasis on the author’s half-century relationship with Ginsburg.

For anyone who has seen the heartwarming documentary “RBG” (and if you haven’t, you really need to), some of Totenberg’s anecdotes will be familiar, but that’s no surprise given their long-running friendship. Add to that, Totenberg was one of Ginsburg’s most frequent interviewers over the years as the tiny-but-fierce Supreme Court justice grew into her alter ego, that icon of girl power, the Notorious RBG.

(Still, there’s much here we hadn’t heard before. Young Ruth Bader as a high school baton-twirler? Did not know that. Also, she played cello. “That cello must have been bigger than she was,” quips Totenberg.)

By her own account, Totenberg’s career is a showcase of women helping women succeed. It started with an internship in 1961 when she was 17 — secured through her mother’s connection with none other than Eleanor Roosevelt — and continued later when New York Times reporter Nan Robertson took Totenberg under her wing.

When Totenberg first walked through the doors of National Public Radio in 1975, Linda Wertheimer was there already, and Totenberg soon helped to get Cokie Roberts hired. They became a powerful trio — not just friends and coworkers, but also champions for women at NPR and beyond. In fact, they had an area in the office staked out as their own; the guys on staff “famously dubbed our corner ‘the fallopian jungle.’”

Totenberg’s first connection with Ginsburg was a phone call, journalist to law professor, to tease out the legal underpinnings of Ginsburg’s brief in Reed v. Reed, her first case to go before the Supreme Court, and the first of many RBG-led and -heard cases meant to chip away at legal discrimination on the basis of sex.

Dinners with Ruth is episodic rather than chronological, organized around various figures, topics, and incidents that may be difficult for readers to track against a larger timeline. That’s less important than the fact that the vignettes are immersive, informative, and colorful, as befits a journalist of such stature. The author knows how to tell a good tale.

One episode people may not remember is that it was Totenberg who broke the Anita Hill story, a scoop for which she was investigated by Congress. Surprisingly, given the ghastly workplace environment Totenberg endured — including physically having to fend off a boss — at the time, she didn’t see sexual harassment as a major issue for women. Her interest in the story was in how it affected Clarence Thomas’ confirmation hearings.

Another surprise, at least for me, was the extent of Totenberg’s friendships with quite a few Supreme Court justices, not just Ginsburg — though theirs was unique for both its longevity and its depth. She describes several such relationships, beginning with Lewis Powell.

The one she cannot sell me on, even though Ginsburg obviously agreed, was how wonderful Nino Scalia was: charming, voluble, with impeccable comedic timing. “At his core, he was a mensch,” Totenberg writes.

Perhaps. But he was also a man who loved the sound of his own voice and frequently dismissed the opinions of others. The crucial difference between Ginsburg and Scalia is that the former never forgot there were real people on the other end of every decision the court rendered. For the latter, the law seemed mostly a fascinating intellectual exercise.

(Totenberg recounts a supposedly humorous incident that I found appalling. One time, the author and her husband, David Reines, a trauma surgeon “who has operated on hundreds of gunshot victims in the course of his career,” hosted the Scalias at a small dinner party immediately after Scalia’s majority opinion in District of Columbia v. Heller — which took an exceedingly broad, non-Originalist reading of the Second Amendment and led directly to the now fully activist court’s expansion of gun rights during its infamous 2022 session.)

Other random tidbits that sparked notice: Justice Thomas actually does know how to recuse himself from a case, since he did so in United States v. Virginia because his son was a VMI cadet. And beyond an oblique reference in the epilogue, Totenberg offers no discussion of the Merrick Garland court-nomination fiasco but notes that, at one time, “both parties had a tacit agreement not to put through any federal judgeships after June” in an election year. How quaint.

So, why didn’t RBG retire earlier, especially given her many health issues? “She wanted desperately to give the first female president the power to nominate her successor,” explains Totenberg. “It was a gamble and she lost.” Unfortunately, she was gambling with everyone’s future, and we all lost.

Even before the horror of Amy Coney Barrett’s confirmation getting ramrodded through after voting was already underway in the 2020 presidential contest — knowing that RBG’s last, heartbreakingly naïve, wish was that no one be appointed until after the election — came the petty meanness of Mitch McConnell denying Ginsburg’s body the honor of lying in state.

It is excruciating that so much of RBG’s influence on the Supreme Court is being erased before our eyes in the span of two short years. “[L]iberals are watching helplessly as decades of precedent are being dismantled,” Totenberg notes.

Nonetheless, Dinners with Ruth is a warm, deeply felt homage to friendship, to what it means to show up and be present for each other, especially in difficult times. It also serves as a reminder that we are not helpless, that we can fight back (which, in contrast to a certain party of insurrectionists, I mean figuratively rather than literally) and recapture some of Ginsburg’s legacy by marching en masse to the ballot box in November.

There is power in friendship. There’s also power in numbers.