Death and the Maiden

A fascinating tale of medieval women skilled in medical forensics. 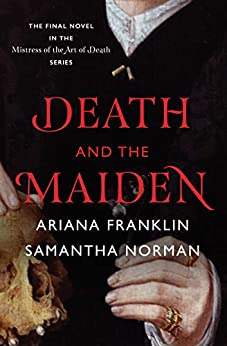 Ken Follett meets Patricia Cornwell in Death and the Maiden, an alluring tale of medieval forensics by Ariana Franklin and Samantha Norman, as well as the last novel in Franklin’s Mistress of the Art of Death series.

In her native Salerno, people knew Adelia Aguilar as Dr. Trotula — a so-called Mistress of the Art of Death, whose mantra was “Forgive me for what I am about to do. But permit your flesh and bones to tell me what your voice cannot” — for her keen ability to examine corpses to determine cause of death. She’s since trained her daughter, Allie, well in the science, teaching her skills from the death farms where she’d learned to dissect rotting flesh.

Adelia “saw not the horror and decay of death but instead the wonder of the process that reduced a cadaver to nothing.” She’d “learned the language of the dead in order to reveal their secrets. The voices of the dead could be unsilenced.”

The year is now 1191, and Adelia lives in retirement at Wolvercote Manor in southwestern England. A strange woman wearing wolf pelts and carrying a crossbow arrives to summon Adelia to the Fens, a swampy land to the northeast in Cambridgeshire. Adelia’s close friend Gyltha is near death and needs her medical expertise.

But Adelia has sprained her ankle and is in no condition to travel, so Allie offers to go instead. The trip will be arduous, but the odd woman reveals she is Gyltha’s long-lost sister, Penda, and assures Allie’s father, Rowley — the Bishop of Saint Albans — that she will protect the girl.

Besides, Rowley knows that Lord Peverell of Cambridgeshire is a promising match for the unmarried Allie, who is almost 20. He agrees to let Penda take Allie as long as she introduces his daughter to the dashing young aristocrat. It’s time to make a suitable match; the healing arts are sometimes mistaken for witchcraft, and both Rowley and Penda know that it is “better to marry than to burn.”

Arriving at Elsford in the Fens, Allie sets about gathering herbs and making concoctions to heal Gyltha. Meanwhile, Gyltha’s grandson, Ulf, discovers the body of a teen girl in the bog and informs Allie that many such girls in the area have disappeared, their bodies found weeks later.

Because the corpse shows no sign of decomposition or obvious trauma, Ulf asks Allie to examine it for clues that might lead authorities to the killer. But he's careful to keep Allie’s inspection a secret. If news of her abilities reaches the wrong ears, accusations of witchcraft might send her to the stockades, or worse. “Magic” is a dangerous word to throw around.

As more girls disappear, it’s clear to Allie that a human predator is ravaging the area. Then, when her own close friend disappears, Allie must use her death-investigation skills to find the missing girl before she, too, is killed. What Allie soon discovers proves more shocking than she could have imagined.

Author Franklin died with only half of Death and the Maiden completed. After much persuading, her daughter, Norman, agreed to write the rest. Without her mother’s 30 years’ worth of notes (which she couldn’t find), Norman “unraveled and re-raveled” the plot until she finished the story.

Completing the book was the last thing Norman felt she could do for her mother, but it was also the last thing her mother did for her. Norman confronted her grief by writing what — and in the manner that — her mother would have written. It’s only fitting that this final installment in the series explores the bond between mothers and daughters.

This enthralling tale of forensic analysis in medieval England compels readers to consider the gravity of that science throughout the ages and the inherent danger to its long-ago practitioners, when the chilling accusation of witchcraft hovered between breaths, and the possibility of execution was a mere allegation away.