Crush: Writers Reflect on Love, Longing, and the Lasting Power of Their First Celebrity Crush 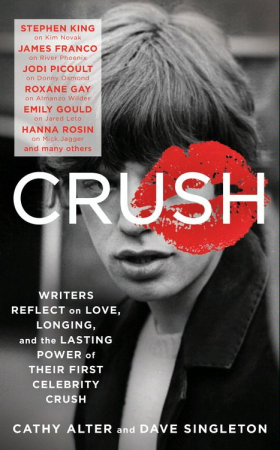 In terms of being taken seriously, a book about crushes — inherently meaningless, one-sided emotional affairs — faces an uphill battle. A book about celebrity crushes seems defeated before it leaves the gate. In Crush: Writers Reflect on Love, Longing, and the Lasting Power of Their First Celebrity Crush, then, editors Cathy Alter and Dave Singleton overcome some long odds in presenting a collection of essays that intrigues more often than not.

What is it about adolescents and their celebrity crushes that leave such an indelible impression? After reading Crush, I still don’t know. But almost everyone seems to have had one, which counts for something. As a rite of passage on the road to growing up, there it is, anywhere between the ages of 6 and 14 or so (although usually right around 11), giving boys and girls in the contemporary world their first taste of longing and, in some cases, lust.

The essays are organized around loose themes: pop-culture idols; the crush as template for the perfect future mate; the platonic crush; the writer who wants to be his or her crush; and the crush eventually met in real life.

As is often the case in essay collections, the best ones here tend to come from lesser-known authors, who had to get their work accepted into the book based solely on its merits. Some of those don’t aspire to anything more than a sweet nostalgia and are better for it: Jessica Anya Blau’s account of a platonic crush on Tatum O’Neal comes to mind, as does David Kepplinger’s of a crush on Debbie Harry.

Other essays in the book, though, strive for gravitas and fail, or succumb to a self-importance that its particular adolescent crush can’t justify. They’ll be obvious to the reader as soon as she encounters them.

Peppered among the general lightheartedness are those crushes that lead to genuine self-discovery. Shane Harris’ crush on Luke Skywalker/Mark Hamill helped him realize he was gay, for example. “That first crush was also a first lesson,” Harris writes, “that one’s opinions and preferences can be so distasteful to others that they’re actually threatening.”

Another example comes from James Franco, whose obsession with River Phoenix led him to enter acting as a career (and to write some questionable poetry about the late actor, to boot). And Shulem Deen writes about the character Danny in the movie “The Chosen,” and the actor who played him, Robby Benson. The Hasidic Danny and his journeying beyond the Hasidim gave Deen his first inkling that he might do the same.

Less often, an essay manages to place a crush into a far deeper context. In what is arguably the best piece in the book, Richard McCann writes hauntingly of a childhood fascination with Bette Davis, developed at age 11 while he and his mother bonded over the flickering din of her movies on the television set in the days after McCann’s father died.

McCann struck up an improbable pen-pal relationship with Davis. In college, he briefly followed in her footsteps, embarking on a short-lived acting career. That’s where McCann became frustrated that no one saw his inner Bette Davis and came face-to-face with his own shortcomings:

“But perhaps, it occurs to me now, as I write this, the problem was not that I went unseen by others; perhaps the problem was that I was all too disquietingly visible — this heavy, oddly genderless boy who waved his hands about too much as he spoke, his laughter always a bit too eager, too shrill and calculated.”

What a relief for me, personally, to come toward the end of the book to the section titled “Over It!” in which writers cringe at the celebrity crushes harbored by their former selves. This is where my own version would belong — on Jordan Knight, the slender, dark-haired, sugary singer from the New Kids on the Block, who I’m sure is a fine enough person, but who I also I wish could be replaced in my personal history by a crush with more substance, artistic or otherwise. Emily Gould feels the same way about her crush on Jordan Catalano/Jared Leto, and Caroline Kepnes about hers on Brian Austin Green (in an essay which also ranks among the best in the book).

As the writers included in this collection conjure memories and feelings that oftentimes have lain dormant for decades, they also invariably find themselves trying to clarify the concept of the celebrity crush.

“Love for the fainthearted, a way to practice pairing up before the stakes get intense,” writes Jodi Picoult as she recalls loving Donny Osmond. A “safe spaces for girls to explore their feelings, their physical urges” — that’s Nicola Yoon, who pined for Michael Jackson. “It isn’t love, it isn’t sex; it was a feeling,” writes Jason Diamond, considering Annie Potts’ tug on his young heart.

None of these quite nail it for me. Maybe because in considering the issue at all, we’re overthinking it. As the book demonstrates, the celebrity crush is at its core a sweet nothing, but like most things in life, the right circumstances, and the right string of words, can imbue it with a grander significance.

Sarah Stodola is author of Process: The Writing Lives of Great Authors and the founder and editor of Flung, a travel magazine that prioritizes great writing and integrity in reporting.