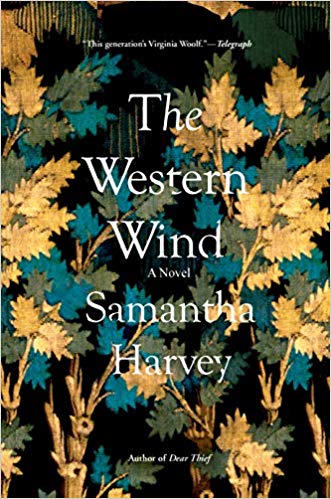 It is 1491, and in Oakham, a small, damp town with goats and cows but no bridge, Thomas Newman, Oakham's wealthiest resident, has drowned. Was it an accident? Suicide? Murder?

This question defines the mystery at the center of The Western Wind, Samantha Harvey's latest novel. It’s a question that drives a deep rumination on the lengths people will go to in order to protect themselves and the ones they care for. It is a tale of guilt, loss, confession, and pride.

The story is narrated by John Reve, Oakham's parish priest. Reve longs to be seen as heavenly — he is, after all, the spiritual protector of his flock — but he is haunted by his humanity. He is drawn into the investigation of Newman's death by the rural dean, who has come to town seemingly intent on proving murder.

And so he sits in his improvised confession box, an idea brought to Oakham from Rome by Newman himself, listening as his parishioners unburden themselves, hoping for relief from their worldly suffering.

The novel is divided into four sections, one for each of the four days leading up to the start of Lent — from Shrove Saturday through Shrove Tuesday. The sections are ordered from end to beginning, with the first section covering the events of Shrove Tuesday and the last covering Shrove Saturday, the day of Newman's death. It's an intriguing structure and not at all expected for this kind of story, but Harvey is a brilliant writer, and the framework only strengthens the plot.

I found myself taking notes constantly as I read. "She's so good at giving us little tastes of answers," I wrote at one point, "deepening the mystery." Questions built upon questions and, as each new revelation came along, the questions multiplied until the end, when the final "aha!" moment brought the story full circle.

As soon as I was done, all I wanted to do was read it over again. There were so many things at the beginning of the book the significance of which I didn't understand until the end. I was sure there was a lot I had missed.

Beyond the structure, Harvey's writing is beautiful and profound. As I read, I underlined so many passages that my copy of the book became full of the tape flags I used to mark my highlights. Harvey inhabits Reve's mind so completely, she draws you in so that his thoughts become your thoughts and his questions become your questions. In previous reviews, her writing has been compared to that of Hilary Mantel and Virginia Woolf. The comparisons are not unwarranted.

Father Reve is a deep thinker who carries the soul of his parish on his shoulders. "We behave according to the creatures we are," Reve pontificates at the end of the first section, "and I had no notion of what kind of creature they'd made me become."

More than anything, it seems, Reve wants to protect his town, protect his flock. But the dean has offered a significant pardon to the residents of Oakham to confess something, anything, hoping to lure the murderer into the confession box. And so Reve sits, the space cramped and dark, an ale at his feet, the dean all but commanding him to find someone to confess to murder, someone he can burn for the killing of Thomas Newman.

Or is he? As the story goes on, the characters become more complex. Everyone has secrets, something to hide, someone to protect. And Reve, there in his dark box, his knees cramped, hears it all. The mundane, the salacious, the lies. And what is he to do with it? What if Newman's death was an unfortunate accident? What if the dean's pardon was in vain? What if there was no murder to confess?

What if there was?

Harvey's brilliance lies in her ability to humanize and complicate her characters, to give them lives and loves and losses, jealousies and pain and secrets. In a way, The Western Wind is more of a character study than a mystery, the death of Thomas Newman being a McGuffin that gives Harvey an excuse to dive into the lives of the people of Oakham, digging deep to discover not only the creatures they had been, but the creatures Newman's death made them become.

Katy Bowman is a writer and web developer living near Dayton, Ohio. She has had work published at the Antioch Review blog, Circa: A Journal of Historical Fiction, the Rumpus, Flash Me Magazine, and on the Dayton Mom-Spot.