The Nixon White House meets "The X-Files" in this unusual, entertaining tale. 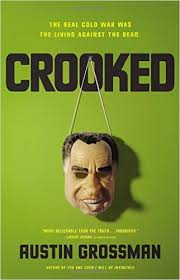 It’s hard to think about Richard Nixon without cringing. Whether you hate the man on a visceral level or are a fervent admirer of his Machiavellian approach to democracy, the name itself causes one to flinch as you remember his self-inflicted fall and dishonorable contribution to American history. Countless books have been written about the former president, some of them praising him, others dissecting his life to figure out what went wrong.

Now comes a novel approach to unraveling what could have been a brilliant, if not consequential, career. Austin Grossman’s Crooked distills Nixon’s life into a world of fiction where the forces of evil are not so much earthly and manmade as they are steeped in the arcane land of the improbable and the occult.

Imagine, if you will, Richard Nixon being intimately involved with Russian spies. Imagine those very same spies connected more with paranormal forces than with the KGB. Imagine a Cold War effort which goes beyond a race for thermonuclear domination and, instead, morphs into a race for supernatural supremacy.

Imagine the likes of Taft and Eisenhower relying on mystical forces for political and military success, and Russia researching chthonic activity as a way to counter American military might. And finally, imagine Kissinger as a 1,000-year-old demon choosing Nixon as his protégée and using him in an effort to achieve world domination.

This is the stuff Crooked is made of.

Indeed, when reading this novel, one needs to make a far-reaching leap of imagination, first and foremost about whether this is really about the Nixon we know. After all, the copyright page contains the usual caveat about the book being comprised solely of fictitious characters, none of whom bear resemblance to anyone real — a curious irony since we are presented with a host of individuals whose names we clearly recognize.

Obviously, legalities are involved here, but, in the context of this book, this one stares you in the face and begs the question: Is this fiction or reality? This ambiguity is no accident. After all, many of us are chronic cynics who doubt the intentions of our leaders. Add to this the book’s cover, with its unmistakable mask of Nixon, and the fiction is turned on its head.

In fact, Crooked faithfully follows Nixon’s life, from his childhood in Yorba Linda through his initial insignificant career as a local lawyer, right through the accidental forces that thrust him into politics. These events are based on facts, and Grossman is to be acknowledged for his biographical expertise.

Then come the layers of fiction: Nixon in cahoots with KGB reps Arkady and Tatiana (think Boris and Natasha); Eisenhower conjuring supernatural forces in the Oval Office; a secret government research facility, tucked away in Pawtuxet, Massachusetts, where zombies roam the premises and conscripts take part in séances and paranormal experiments. Ditto for the Russians in a similar facility buried in some remote region of the vast Soviet Empire.

Grossman’s is a subtle logic conjuring conspiracy theories of the likes of Roswell and alien encounters and the denial of such (remember “The X-Files”?). The reader is at once asked to suspend belief and, at the same time, to question our government’s probable involvement in highly classified research that goes beyond the usual military machinations.

In this sense, the book’s title is not so much a reference to Tricky Dick’s crooked ways as it is a description of the byzantine structure of the novel and, by extension, the world itself: a place where reality and fiction become so intertwined that one is not quite sure what to believe. But then, as we have been told, the truth is out there. It only needs the likes of Mulder and Scully (or, in this case, Arkady and Tatiana) to help us find it.