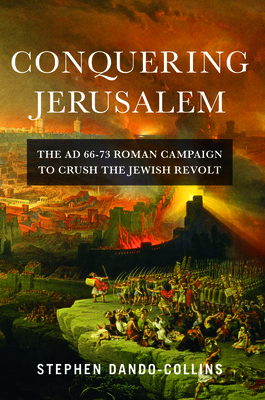 Wikipedia lists 30 books by Australian author Stephen Dando-Collins, all on historical subjects, with more on ancient Rome than on any other period. But this new volume is as much concerned with the Jews of the first century AD as it is with the Romans. It tells the story of the Jewish revolt against the Roman Empire, starting with the surprise attack on the city and fortress of Masada by Jewish rebels who the Romans called the Sicarii (meaning “assassins”) in the late spring of AD 66.

The major source material for Conquering Jerusalem comes from the writings of Titus Flavius Josephus, whose The Jewish War is the only known record of many events that occurred during the conflict. Josephus is a fascinating figure. Born Yosef ben Matityahu in Jerusalem, his parents were noble Jews. At first, he fought against the Romans but later joined them against his own people. As a result, he became a Roman citizen, romanized his name, and became Flavius Josephus, later adding Titus in honor of the son of Emperor Vespasian who later assumed the throne himself.

The war, which lasted from AD 66 until the capture of Jerusalem in AD 70, was interrupted by imperial struggles in Rome climaxing in AD 69, which historians labeled “the year of four emperors.” By modern standards, the war was extremely brutal, with a huge number of casualties on both sides. It was common practice to kill captives outright, often by slitting their throats. Suicides among the defeated were commonplace.

Among some Jews, whose religion forbade suicide, the beaten drew lots as to who would kill whom until the last man left standing took his own life. We don’t know the number of Roman soldiers who died during the conflict, but the estimate of the number of Jews killed during the siege of Jerusalem is 1.1 million. Those captured — number unknown — became slaves or were slaughtered as entertainment in Roman amphitheaters.

A major detriment to the Jews was their internecine feuds. They ruthlessly killed one another and resorted to chopping off hands and sending the maimed prisoners back to their opponents’ forces as a warning of what was to come. During the siege of Jerusalem, fighting among the Jews trapped inside the city walls seriously weakened their resistance and hastened the Roman victory.

After a long (and interrupted) struggle, the Romans surrounded Jerusalem, and the assault on the city began. Because the Romans succeeded in cutting off food supplies to the city, starvation soon became a major concern. One vivid tale is worth quoting:

“A young woman named Mary…was suckling a young son. But without food, her milk dried up, and she could no longer feed him. Losing her mind, she killed her son, then roasted him. She ate half of her son’s flesh and kept the remainder for later. The aroma of cooking flesh soon drew rebel [Jewish] fighters, who forced their way into her lodgings and ordered Mary to hand over the meat she’d cooked, or they would cut her throat.

“‘I have saved a very fine portion of it for you,’ said Mary, revealing the half-eaten remains of the child. ‘This is my own son,’ she said matter-of-factly…The partisans staggered from Mary’s house in shock.”

Another bizarre anecdote (among many) in the story is about Jews who deserted to the Roman side but first swallowed their gold and jewels. Later, they secretly relieved themselves and recovered their valuables from their excrement. Syrian archers noticed what the Jews were doing. Before long, Roman soldiers were combing all Jewish feces for gold.

The book concludes with the fall of Jerusalem to the Romans and the subsequent destruction of much that lay inside the walls. Suicides and killing by lot were legion. The Romans executed many, including women and children, on the spot. By the time the Romans had finished their conquest, not much of the city was still standing, and few survived.

Dando-Collins’ writing in this book follows the maxims of good journalism. His simple and direct prose rarely caused me to stumble and reread. But several elements made comprehension difficult. One was the huge number of characters in the story. The author relates the history of hundreds of Roman and Jewish figures, many of whom had more than one name.

Another difficulty is the complex geography as the war ranged throughout what is now modern-day Israel and its environs. Placenames run to the hundreds, and recourse to maps is a necessity. A third barrier to easy understanding is the overwhelming number of incidents — mostly battles — recounted and the difficulty of remembering the locations and identity of the participants. It’s to the author’s credit that the text is as intelligible as it is. He is an experienced and dependable writer.

My reaction to Conquering Jerusalem was largely horror. The common practice of casual killing and maiming of the conquered shocked me, a man who has seen combat repeatedly. Compared to today’s rules of war, or international humanitarian law (as it is known formally), the routine savagery of both the Romans and the Jews is appalling. But it was an appalling time when cruelty was far more common than compassion.

Equally distressing was the Roman practice of killing people for entertainment. The residents of Rome were regularly offered shows that consisted of the slaughter of prisoners of war and condemned groups (such as Christians) in large amphitheaters like the Colosseum. I was hard put to imagine watching death as a form of relaxation.

So, I can recommend Conquering Jerusalem with the proviso that the reader must be prepared for a vast number of details, events, and names, and for a level of barbarity no modern human would tolerate.

Tom Glenn’s profession during his years as a U.S. government employee was as a linguist and a spy. Comfortable in seven languages, he specialized in providing signals-intelligence support to combat forces on the battlefield. Now a full-time author, he has six books of fiction and 17 short stories in print. Most of his fiction is about Vietnam, where he spent the better part of 13 years before escaping under fire when Saigon fell.