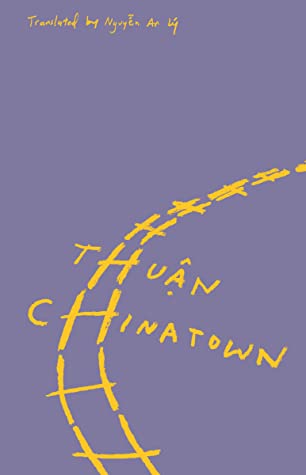 In Chinatown, acclaimed Vietnamese author Thuận’s first novel to be translated into English, a woman and her 12-year-old son are on their way to a table tennis tournament when their train gets delayed. “The train has stopped at some minor station. Fifteen minutes and still no sign of it moving. They have stumbled upon an abandoned duffel bag. They suspect a bomb in such a forlorn place is a ploy to mask a far more sinister scheme.

“I wonder if I should stay put and see just how sinister. Or leave and catch a bus.”

That love, though unwavering, is doomed because Thụy is ethnically Chinese, and China and Vietnam are engaged in a border war, causing virulent anti-Chinese sentiment. Thụy is called a “Beijing goon,” ostracized in their Hanoi community, shunted to a degree in architecture — useless in a country whose new construction comes prefabricated from the USSR — and unable to get a job because of his Chinese last name. The narrator’s parents denigrate Thụy and hope she’ll forget him during her five years at a university in Leningrad pursuing a prestigious “red diploma.”

Nonetheless, they marry and have a child. A year later, Thụy leaves her, their newborn, and their home in Hanoi for Saigon’s Chợ Lớn, the world’s biggest Chinatown. She and Vĩnh eventually depart Vietnam for the multiethnic Paris suburb of Belleville, where she teaches English to high school students “who detest the word ‘future,’ detest the Ministry of Education, and detest my English lessons most of all.”

She has a white French friend, “the guy,” who likes to talk to her on the phone so he doesn’t have to see her “sullen” face; during frequent trips to Vietnam, he visits her parents, who are eager for them to marry.

Though the narrator resides in France, over the course of a two-hour tour of her innermost thoughts as she and her son wait on the train, it becomes clear she mostly lives in the past, haunted by Thụy:

“On Vĩnh’s very first birthday, he wrote home. Two hundred thousand dồng plus a black-and-white photograph. He was standing by a two-storey house, a shop sign with Chinese lettering, a pair of Chinese lanterns.”

After that, she never hears from him again.

Chinatown is a stream-of-consciousness journey back into the unnamed narrator’s past, with no chapter or paragraph breaks save for the story “I’m Yellow,” the narrator’s fictionalized version of Thụy’s side of things, inserted in two parts into the text. In cubist prose, Thuận returns to the same sentences and phrases in imitation of the way the mind perseverates, loops back on itself, and returns to seminal memories again and again.

The photograph of Thụy in Chinatown is one of the pulse points of the narration, as is, among others, a song with the refrain “un milliard de chinois, et moi, et moi, et moi”; Marguerite Duras; sweet catjang soup and steamed pig brains; a preoccupation with numbers; Thụy’s birthplace of Yên Khê; and the autofiction novel the narrator is writing.

For the narrator, memories of her departed homeland have taken on mythological meaning. Author Thuận, who lives in France, recreates the rich texture of the past as it exists for those severed from their origins, a layering of memories, historical eras, and personal milestones that shifts and melds.

As the narrator gets deeper into her reflections, she constructs an epic story built upon her foundational myth: “People are obsessed with what they fear.” The narration delves into the symbolism of China, which has transformed from an impoverished nation under Mao Zedong to an economic powerhouse with global ambitions, culminating in a fever-dream scenario of Thụy and Vĩnh on a business trip that involves driving past paddies and Parisian landmarks in a lime green BMW at increasing speeds, the giving of bribes for economic secrets, and “The East Is Red” playing on loop.

Translator Nguyễn An Lý seamlessly recreates the complicated flow of the narrator’s thoughts, nimbly incorporating the subtle changes in tense and viewpoint that are crucial to the interior monologue. Deftly navigating the cacophony of cultures — from untranslated Vietnamese and Mandarin words, Iron Curtain-era historical references, memories of Soviet Russia, and present-day Paris with its multicultural manifestations of France’s colonial past — Nguyễn never breaks the fragile thread of coherency.

According to the narrator, “Chinatown is the final mystery.” There is a lot of myth and mystery to Chinatown, too: a dense meditation on history, colonialism, ethnic identity, novel writing, love, and belonging. The lack of white space on the page and the associative chain of ideas that build one upon the other make for challenging reading, especially as the narrator builds to a hallucinatory climax. Those who persist to the end will be rewarded with a powerful take on the immigrant’s tale that interrogates the intricate veil of history through which we endow our lives with meaning.