Chances Are…: A Novel

Old college friends reunite to face the truth about a long-ago disappearance. 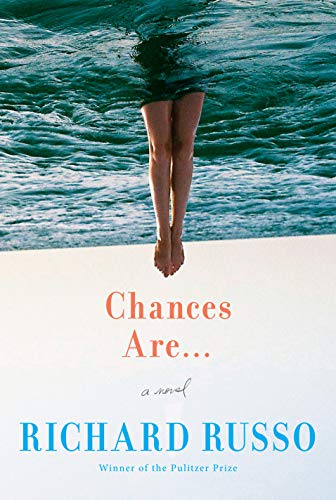 It’s virtually impossible to read Chances Are…, Richard Russo’s nostalgic novel of romance, reminiscence, and redemption, without humming the melody or recalling the lyrics of the 1957 tune popularized by Johnny Mathis. It’s there in the title.

That, and another song from a decade later, Grace Slick’s “Somebody to Love,” are the background tracks (both are referenced several times) for the narrative’s predominant themes of passion and imagined obsession.

Three 66-year-old men — Lincoln Moser, Teddy Novak, and Mickey Girardi — friends since college, return to a vacation home in Chilmark on Martha’s Vineyard for a weekend reunion 44 years in the making. In the process, they recall a life-altering event which involved a young woman, Jacy Rockafellow, and the effects she had on all of their lives. Her disappearance hangs over them like a shroud.

Chances are awfully good that each will have different memories of their past, of “old friends and recollected youth.” Each harbors a dark, devastating secret about the night Jacy vanished in 1971.

The four of them, from diverse backgrounds, met as first-year students in 1967 at Minerva College, a small, liberal arts school on the Connecticut coast. Lincoln, now a commercial real estate broker in Las Vegas, grew up in an Arizona desert town — his father, a minority owner in a copper mine; his mother, a Wellesley graduate who owned the cottage where the men now gather.

Teddy, an editor and publisher at a university press in Syracuse, lived in the Midwest, the only child of high school English teachers. Mickey, a rock-n-rolling sound engineer still living in the area, hailed from a working-class family in West Haven, his parents Irish and Italian, a construction worker and a secretary for an insurance agency.

Jacy was the most privileged of the group — her parents, Viv and Don, members of Greenwich Country Club, harbor their own “falsehoods and treacheries.”

Destiny brings the four together. The boys, on scholarships, share a dorm room. Out of economic necessity, they sling hash in Jacy’s sorority — one a “face man” who serves in the dining room, another a cook’s helper, and the third a pot scrubber. Each develops a serious crush on Jacy.

One other historic, life-defining moment changes their lives: the draft lottery during the Vietnam War (the book is dedicated to “those whose names are on the wall”). Mickey draws the lowest number, nine, out of 366 possibilities; Lincoln gets 189; and, Teddy, 322. After graduation, the four meet at Chilmark for one last hurrah.

On Memorial Day, Jacy walks out, leaving a cryptic note, “No goodbyes. I couldn’t bear it.”

Most of the novel, told in alternating voices (mainly Lincoln’s and Teddy’s), retrieves lost memories until the chilling, ultimate truth is revealed. The long, lingering mystery of the missing femme fatale is resolved. One of the characters notes that “Memory lane is vastly overrated.”

Or, to paraphrase the Mathis song, who will “always be the one and only one” for whom?

There is a great deal of mordant memory in Chances Are… In his admirably inimitable fashion, Russo, with a patently clean, direct style and acerbic wit, captures the lost innocence of idyllic youth, the grand delusions of a pastoral collegiate experience, and the constant moral itch of lingering guilt.

His cogent deftness at acute observation and critical social commentary underscores how the four friends are chastened by life’s perplexing exigencies and character-defining events.