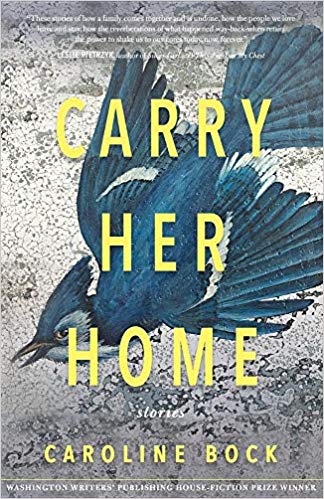 Flash fiction — stories encompassing one to two pages — has been around for a long time. Luminaries such as Zora Neale Hurston, George Saunders, and even Kafka used the form.

But in the past decade, it has become more prominent, driven perhaps by tiny screens and shortened attention spans. There are whole literary journals devoted to flash; the venerable New Yorker published 10 such stories this past summer.

Caroline Bock’s new collection, Carry Her Home, which the author calls autobiographical fiction, takes flash into another realm. Using short chapters, some only half a page, she tells her family’s story; sorrows, vacations, struggles, and losses emerge in a series of short strokes that read like a fever dream.

In the first chapter, a father says to his oldest daughter, “I’ll be back on Sunday or Monday, or soon.” The girl shivers under her quilt, “dumb, wide-eyed, knowing only that mothers and fathers leave…”

Next, the narrator picks tomatoes with her father, Pop, and then later with her own daughter. A relief to know that the narrator, whom Pop calls Toots, survived the abandonment.

Toots makes red sauce with her mother, who is demanding and somewhat cruel, angry perhaps that her daughter is more like Pop.

In a sudden switch, Pop is advised not to raise his kids alone, to give them up. Has there been a disaster? Evidently, because, in “Piggy Back Ride,” the kids romp wildly with their father through the house. “He had no wife, and we had no mother at home, nobody to say stop, halt.”

Where has the mother gone? The answer comes in the heartbreaking “Louise’s Kids.” The mother is confined by a stroke to a wheelchair in the Hudson River Psychiatric Center. The kids visit, clinging to her, even though she can’t properly respond.

In the even more heartbreaking “Carry Her Home,” he takes his wife back to her room.

For the rest of the section, we follow the family as the father struggles and the narrator grows up. The language is taut, rhythmic, and the details are lovely, sometimes funny. On a camping trip, the father buys a Coleman Stove for emergencies. The children are wary.

Bears? Mountain tigers? The father says, “You should always be prepared…you leave in the morning thinking it’s going to be another ordinary day, a boring day, the sun is shining, the sky is blue, and you get the extraordinary. The devastating…That’s why I bought a Coleman Stove.”

The second section goes back in time and, in longer chapters, tells of how Louise and Murray, the real-life names of the author’s parents, met at the Palladium Ballroom. Murray is poor, Jewish, and worried about his shoes. Louise is older and feeling a wall flower. There’s a police raid, a dinner at Louise’s house, a dalliance with another boy, a pregnancy, and a wedding. Surprisingly, although told with as much detail as the first section, the parents’ story doesn’t seem to go anywhere.

This may be because the reader already knows that they will marry and she will fall to disaster. Such foreknowledge cuts the tension that could build as the two reach out to each other and replaces the drive of the opening with a charming tale.

Another difficulty may have been that these events happened before author Bock’s birth. The internet can provide images of the Palladium, its music and bands, fashion of the late 1950s, even attitudes, but that information is bound to lack the surprising detail that makes a story specific.

Although Bock works hard to depict the period, the characters are in generic situations with generic thoughts. Here and there, a thoughtful or humorous moment flashes through, such as when Louise’s mother, who’s wary about her daughter spending time with a Jewish guy, says, “A man like that has history on his back.” Or when Louise, who’s flirting with a man in cowboy boots, thinks, “I’ve never liked Westerns…never had fantasies of being roped or steered.”

But unlike the first section, which soars, the second never quite gets off the ground. At the very end, Bock writes, “Years later Caroline [Toots] would have to make up many of these details because Murray would claim that he couldn’t remember, and Louise would have lost most of her memory to an aneurysm.” Making it up, for Bock, lacks the force of living the reality.

Fortunately, the third section returns with a lovely complex story about Caroline grown, married, and visiting her father and brother. A mixture of short and longer chapters follows the life of Pop to his end, including a chapter when he meets the long-dead Louise to apologize and proclaim his love.

Two remaining sections contain a clutch of flash fiction related to the main story not in content, but in mood. These stories are entertaining, occasionally illuminating, but lack the cohesion and velocity of the opening. Still, Bock has taken a risk with her unusual structure and, in many ways, succeeded. Her family, especially her relationship with Pop, will stay with the reader.

Terri Lewis is a writer of many submissions and lots of hope. She lives in Washington, DC, with her husband and two dogs: Pushkin, who thinks she’s a cat, and Tango, who belongs in the circus.